Dress aerodynamically! The weather forecast says it will be windy today

Have you checked the weather forecast this morning? The world triathlon champion surely hasn’t. Sebastian Kienle has the most original of training sessions: head first, full speed ahead against the wind.

That’s an aerodynamics training! Sebastian Kienle is doing it together with the Mercedes-Benz V-Class experts, in Untertürkheim, Germany . It might look like a piece of cake, but not if you’re in the wind tunnel. The glossy digital display above the German’s head shows 28 mph (45 km/h). It can even get worse during the race, as he sometimes has to face a 44-mph (70 km/h ) wind. 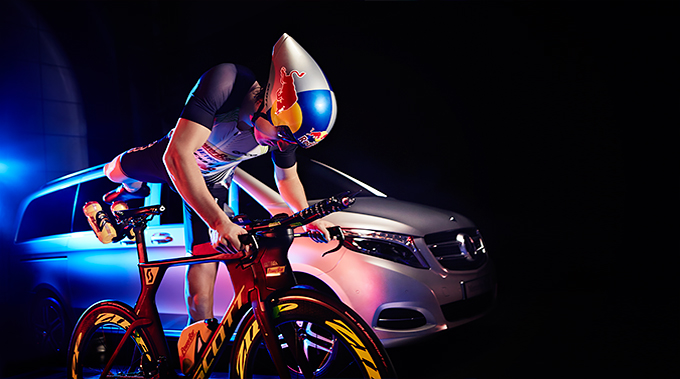 That’s just the tornado he is trying to keep straight in and run against. Below him and his pro bike, the tunnel’s base plates moves a few degree to the left, in order to artificially generate also side breeze. Or maybe we should call it „side blow”, cause a 45-km/h wind is surely no beach breeze.

The 30-year old Sebastian Kienle has an impressive CV. He has won the IronMan World Championship last year, in Hawaii and he’s been winning world tournaments since 2008. And fighting the weather forcast in the Mercedes-Benz center is just as challenging: „I’m glad it looks comfortable – that’s how it should be. But it’s misleading. Actually, it is very much uncomfortable after a while. You get back pain and begin to see stars, because your head is hyperextended and the nerves in the neck get pinched. And you have to turn your eyes very high up to get any view at all. There are triathletes who wouldn’t be able to ride in this position, let alone pedal like this for more than four hours.” 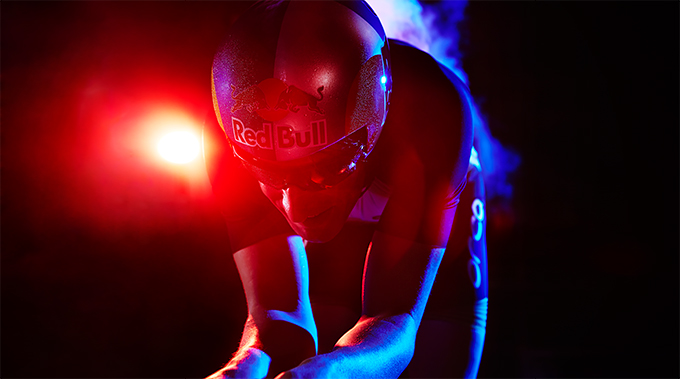 But despite the back pain, the neckache and the stars he is seeing while battling the invisible force, he knows that aerodynamic drag is his toughest opponent. „Of all the obstacles I have to overcome, this is the biggest. That’s why I want to sit on the bike as aerodynamically as possible”, says the man who is currently training 28 hours per week and even 40 hours per week during a training camp. “The tougher, the better”, he proudly claims. In an Ironman competition, he needs to swim 2.4 miles, ride the bike for 112 miles (180 km) and if those are not enough, he needs to run a marathon (26 miles/42 km).

Kienlse has teamed up with the best for his training. Covering almost 10 000 miles (16 000 km) on a bike and 18,600 miles (30 000 km) in a car every year, he surely needs space as he sometimes needs to fit in three bikes and several wheel sets for a competition and of course, his crew members.

“My V-Class is ideal in this respect, because it has enormous amounts of space, but drives like a normal car. I like something a bit sporty, but also enjoy the feeling of comfort and safety when I’m on my way back after a long competition”, he says.

You can read the whole story of the champions right here!