The info on the forthcoming BMW 1 Series Sedan keeps popping up from all over the place. After all the spy shots we’ve shown you lately (with the latest coming no further than yesterday), this time it’s a set of digital renders imagined by RM Design.

If we’re to believe these renders, the new BMW 1 Series Sedan will bear a striking resemblance to the recently launched 1 Series hatch – and so it should. The front end is basically the same, while the side design keeps the sharp crease that stretches the whole length of the car. The rear is similar to that of the 2 Series coupe, but with the larger tail lights specific to newer models – so no surprises there either.

The overall aspect of the car is a lot tamer, more conformist than that of the Mercedes-Benz CLA (it’s on par with the Audi A3 as far as boldness goes), so the two should really appeal to slightly different types of customers.

The 1 Series Sedan will have to bear another very heavy cross with it: it marks the switch to front wheel drive for BMW sedans, after the highly contested (but very well received, if we’re to look at the selling figures) 2 Series Active Tourer took the flak for being the first BMW to have the motor wheels in front. 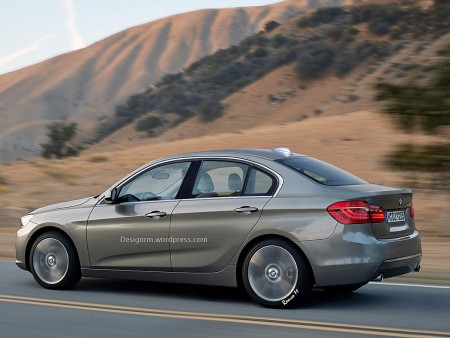 While BMW insists the new architecture does nothing to dent the dynamic spirit of their cars, common sense tells us otherwise. We’ve driven the 2 Series Active Tourer and we’ve been thoroughly impressed by its agility (and the MINI isn’t bad either), but you can’t help feel that something is lost.

But nevermind all that – we’ll see how the car drives when it will finally come out. Right now it’s the looks we’re interested in and the BMW 1 Series Sedan seems to keep within the same safe BMW formula of late. Nothing too fancy, nothing too drab; nothing close to the Mercedes-Benz  CLA, then.