The Audi A8L 50 TDI quattro, BMW 740Ld xDrive M Sport and Mercedes-Benz S350d L AMG Line are each £100,000 diesel luxury machines. So, what is a saloon car this expensive supposed to look like? How do you pronounce £100,000 in pressed metal, in the context of a brand new, fourth-generation Audi A8, Mercedes’ heavily facelifted, sixth-generation S-Class, and BMW’s sixth-generation 7-series from 2015?

Since luxury is mostly about the lavishly appointed interiors, let’s start with this chapter. Own a long-wheelbase A8 and you will realize there’s nothing worse than lagoon-black surfaces covered with fingerprints, as the Audi demonstrates after just one MMI induction course evening, while the dashboard air vents lurk behind panels matching the trim.

The A8 sees Audi continue with a high-tech screen crusade first realised with the Virtual Cockpit. But now, the MMI rotary controller we used to know and love has vanished altogether, and we must re-learn control of Audi’s multimedia interface via twin centre-console touchscreens. This takes a while, but is reasonably intuitive once you learn your way around. Less pleasingly, the potentially slick, pseudo-haptic feel to touchscreen operation requires an over-mighty shove of the fingertip to wake a slumbering icon, detracting from the anticipated new-tech thrill of the deed. 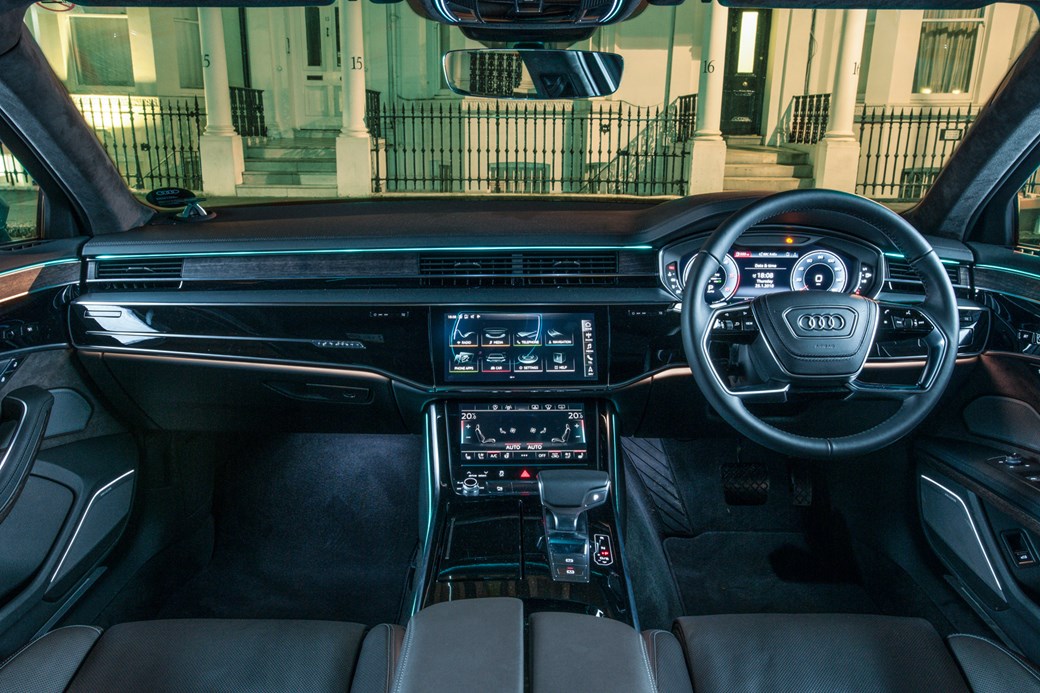 Marrying an excellent driving position and first-class driver’s seat comfort with by far the most modernist interior execution here, the A8’s cockpit is a starched-linen-crisp, gently funky place to be. Nonetheless, one can’t help wondering if just a whiff of good old-fashioned switchgear practicality hasn’t been washed away in the interests of flush surfacing.

So, time to move on to the 7-Series and you either like the way BMW does things, or you don’t. This is a three-year-old model, so we won’t bore you with overmuch detail. Suffice it to say that iDrive system control has been sufficiently reworked as to finally come into its own; that the driver’s seat is by far the firmest here but doesn’t upset the driving-experience apple cart in the way the obscenely fat-rimmed helm manages to; that faux-analogue driver’s instruments are pointless because they’re locked in position by brushed-metal crescents; and that the air-conditioning is relentlessly noisy, even when it must, surely have reached the required temperature. Oh, and two fingers to gesture control. 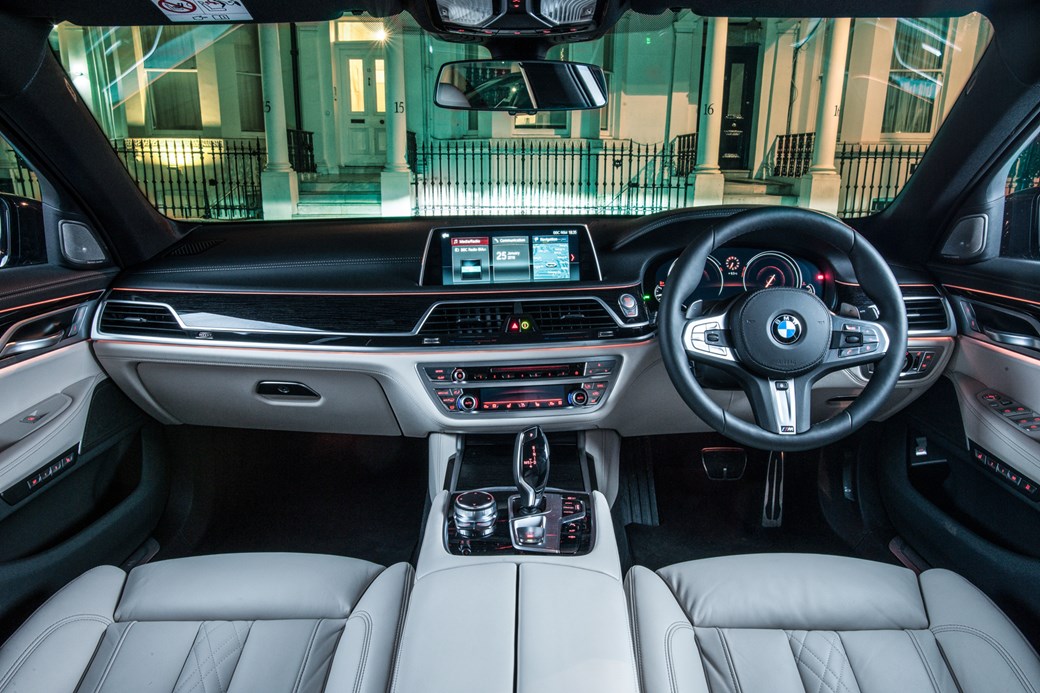 The 7-series sports, perhaps, a younger man’s interior than that of the S-Class; nicely put together but a tad glitzy and, frankly, now starting to show its age in a way that the blatantly more conservative and cuddlier Mercedes-Benz interior manages to avoid. That’s not to say that the Mercedes is not still the undisputed luxury leader here. A clear winner in the accepted traditions of opulence stakes, the front of the S-Class is a wonderfully cosseting environment. It’s as comfortable to back into as warm butter and the driving position is faultless. Cross-stitched dashboard panelling, strange and unhealthy things done to innocent wood, over-the-top Burmester speaker grilles, and a vile brown colour to the dashtop and seats all detract from what is actually a rather classy interior.

There are, however, some anomalies. The multimedia controls avoid the need to touch any screen, thus retaining a pristine appearance. But why obscure a perfectly serviceable rotary knob beneath a touch-sensitive pad that simply gets in the way? Likewise, the steering wheel is lovely to hold, but not behold. Most of the switchgear is swathed in brash brushed metal and impossible to identify even when backlit. And new swipe, stab and hope touch-sensitive buttons are nothing like as precise as the previous-generation switchgear. Does anyone try these new systems while driving, or do they just sit in a lab? Into the back, however, installed diagonally opposite the driver’s seat, you won’t be disappointed by the full ottoman reclining to a snooze-worthy 37 degrees, a headrest of consummate comfort and the facility to shunt the front seat out of the way, the headrest folding forwards and a footrest appearing from below at the same time. 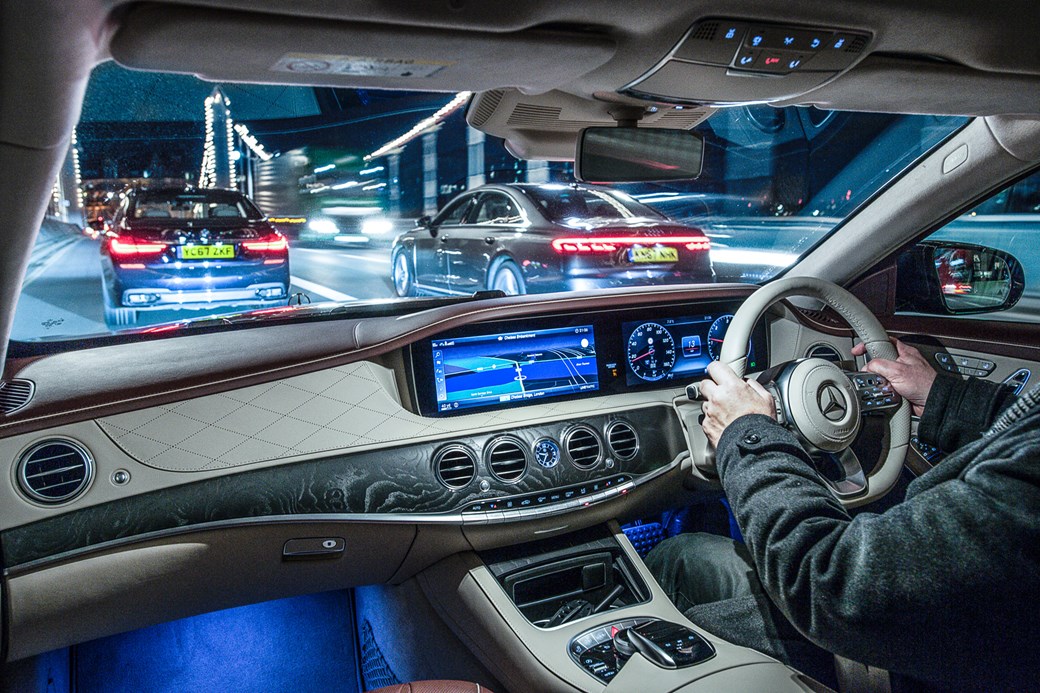 The BMW take on the boss’s chair is almost as clever but not almost as comfortable as that of the S-Class, and the tablet-style rear-seat control just doesn’t want to work at all. I’ve tried it before and know it does, just not this one. It’s actually the Audi which comes closest to matching Mercedes’ rear-seat comfort, despite the fact that the footrests are merely carpeted wedges to be hoofed at will around the well. Another odd decision, the rear headrests will not adjust automatically, and nor does the seat return to its memorised position automatically, having thrummed backwards to let you out. As with the BMW there’s a demountable tablet with which to control various functions including the multimedia system. This one works.

All three luxury cruisers are armed with six-cylinder, give-or-take 3.0-litre turbodiesels. The S-Class features an all-new, twin-turbocharged straight six which, matching the Audi V6’s 282bhp and 442lb ft precisely, replaces the V6 in the interests of modularity, more room for ancillaries – such as the location of the AdBlue system closer to the block – and a claimed improvement in fuel efficiency which our test figures do not substantiate. BMW’s straight six boasts more power and a significant hike in torque, the only downside to the resultant performance superiority being that it’s intrusively noisy at idle and remains the most vocal unit here as it goes to work. 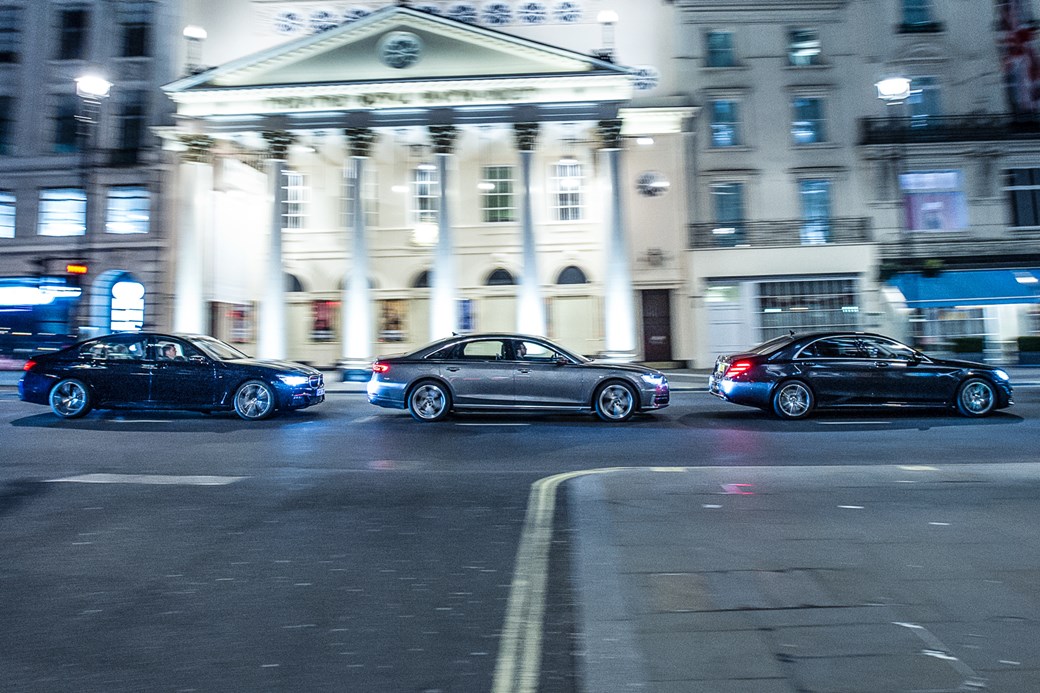 Both the S-Class and 7-series largely conform to the dynamic stereotypes of their marques; the former clearly feeling its foremost responsibility is to simply obliterate any potential intrusion into the opulence and calm of the cabin, the latter maintaining BMW’s pedigree as the most engaging driver’s car.

The new A8, however, proves… READ MORE ABOUT THE DRIVING CHARACTERISTICS ON CARMAGAZINE’s SITE. FIND OUT WHICH LUXURY LIMO IS THE BEST HERE.