We have no idea about his wife, but it is only fair that he will be together with his car for better or for worse, until death do them part. The DTM driver Maro Engel used his Mercedes-AMG C63 DTM on his wedding day, to take his bride to the church and to the party.

Apparently, blond Steffi consented, as he asked for her permission prior to giving an answer to his DTM team. It was quite a surprise that she accepted, since the racing car has never featured top comfort features and even lacked air conditioning. She had a reason for it: the DTM racing car is symbolic for their relationship, since it was the motorsport competition that brought them together in the first place: they met at a DTM event. 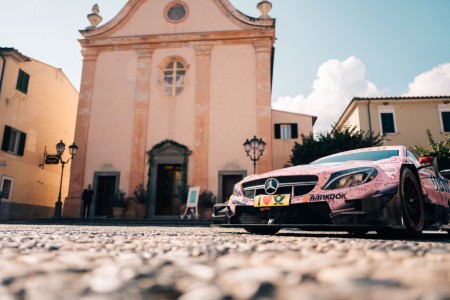 Maro Engel drove the car from the couple’s home to the church and then from the church to the hotel where the wedding reception was held. The two deviated a little from the usual route, as they wanted to drive through a small fishing village, along narrow streets and coastal roads.

It turns out that their marriage starts with a bit of a communication issue. The very loud engine and the poor sound insulation of the C63 prevented them from having a conversation throughout the journey. Yet, it brought smiles on their faces, turning their wedding day into an especially memorable one. 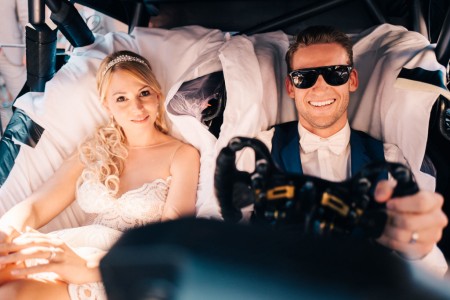 Maro Engel admitted that the cockpit was extremely hot and, to enhance comfort and protect their wedding clothes, they wrapped the leather seats in tablecloths, to which they added colorful ribbons.