If you drive a truck for a living, you should probably look elsewhere because you’re not going to like this: Daimler Trucks have taken an autonomous truck on public roads for the first time.

The Terminator script seems to creep closer and closer to reality – well, at least for truck drivers it does: Today, Daimler Trucks became the first manufacturer to ever be granted a road license for an autonomous heavy-duty truck.

It all happened on the U.S. highway 15 in the vicinity of Las Vegas, Nevada, with Brian Sandovan, the Governor of Nevada and Dr. Wolfgang Bernhard, the member of Daimler AG board responsible for trucks and buses, on board of the so-called Freightliner Inspiration Truck.

The heavy-duty truck equipped with the Intelligent Highway Pilot for autonomous driving was paraded in front of representatives of the media, government, as well as business and finance. It is based on the US Freightliner Cascadia Evolution model which is already in production, with the addition of a radar system and a stereo camera (which basically make up the Intelligent Highway Pilot system), as well as already common features such as Adaptive Cruise Control+ as seen on the Mercedes-Benz Actros. 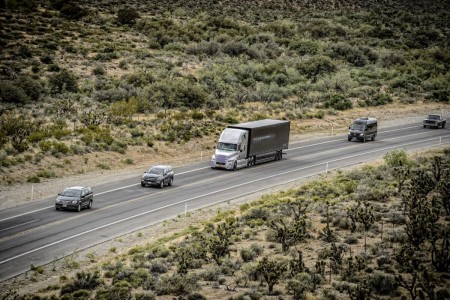 The State of Nevada has issued a double license for two Freightliner Inspiration Trucks for regular operation on public roads. Daimler Trucks is the global leading truck manufacturer and, with the Freightliner brand, also the biggest producer in the U.S.

“Our Freightliner Inspiration Truck is the world´s first autonomous commercial vehicle to be licensed for road use. Our achievement here underlines yet again our role as a technological pioneer and demonstrates our consistent dedication to develop the technology for autonomous long-distance driving to series production standard. I am proud of this extra-ordinary achievement by the Daimler Trucks team,” stated Dr. Wolfgang Bernhard. 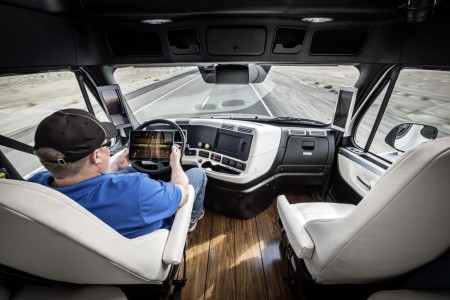 “We are in a unique position among manufacturers that we are able to implement technologies across all business units and brands. We have transferred our Highway Pilot system to our U.S. Freightliner brand within a very short time frame and developed it for the world´s first autonomous truck to be licensed for road use,” reports Dr. Bernhard.

On road transportation is by far the most widely used method for carrying goods in the US, with trucks responsible for a total of 70% of all freight tonnage in the United States in 2012. That is to say that no less than 9.4 billion tons worth of cargo have been moved around by trucks in the US, and the number is expected to triple by 2050.