Daimler is ready to start testing its intelligent self-driving trucks on German roads. The trials could begin as early as this Autumn.

“We are positive that we will get approval for tests on German motorways within the next weeks, then we will start testing the Daimler self-driving trucks immediately,” executive board member Wolfgang Bernhard has revealed to Reuters.

The semi-autonomous prototypes will begin their testing phase in Europe on Autobahns surrounding Baden-Wuerttemberg, home state to the German company.

Driving the trucks will be a complex network of computers, cameras and sensors, as part of the already unveiled Highway Pilot revolutionary technology which relies heavily on the front radar, lasers and assistance systems mounted on the trucks. The Daimler self-driving trucks are still considered semi-autonomous, though, since a human driver will have to be present at all times, not only for safety regulation considerations, but also in order to properly manage all the data spawned. 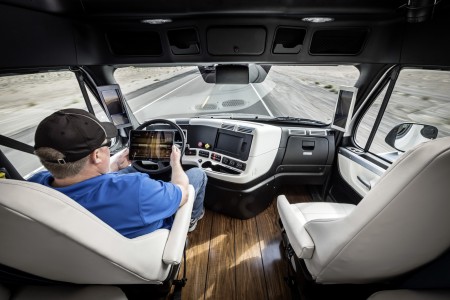 This is not the first time Daimler has taken its self-driving mammoth trucks on public roads. Earlier this year, the futuristic looking Freightliner Inspiration concept truck has already hit the US roads, following the approval for road use granted by the State of Nevada.

Even if testing trials will be begin before the year’s end, actual production of the first generation of Daimler self-driving trucks is not envisioned to debut before 2017 or even 2018.