According to Reuters, German car and truck manufacturer Daimler reported a 29% jump in the third-quarter earnings at Mercedes-Benz Cars, which surprised investors wary of an economic slowdown.

Daimler reported its best quarterly sales in history in September, thanks to the market launch of new Mercedes-Benz models and the increasing demands in China. Daimler said it sticks to the forecasts for 2014 for its divisions, which also includes Daimler Trucks, where quarterly earnings increased to 17 per cent to 618 million euros.

Shares in Daimler will publish the full quarter financial results on 23rd October and they were up 3.2 percent to 58,51 euros. The group has said so far that it expects full-year industrial free cash flow that were adjusted for acquisitions and disposals, to decline significantly from 3.2 billion euros reported for 2013.

“The results are significantly better than expected. This shows that fears of a profit warning that weighed on the stock over the last weeks were unfounded”, said Frank Biller, an analyst from Stuttgart. 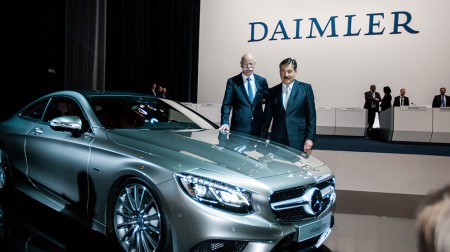 The third quarter is by far the strongest quarter in company’s history to date, with 11,9 percent growth. According to Ola Källenius, Member of the Divisional Board of Management of Mercedes-Benz Cars responsible for Marketing & Sales, the last quarter of 2014 will start with a double digit growth.

After all, Daimler CEO, Dieter Zetsche, confirmed earlier this year that, despite the army of smaller, cheaper or front-drive models that have been launched recently, the C-Class remains the company’s biggest selling model.