Daimler and Geely have signed a partnership to develop a ride-hailing mobility services in China and are now making plans on a closer collaboration. The Chairman of Geely, Li Shufu, had already purchased 9.69% of Daimler.

Daimler and Geely are set to develop the program to join the ride-hailing market, currently led by Didi Chuxing, that also bought the Chinese subsidiary of Uber in 2016. Apple is also a major investor of Didi, so that is the rival to beat.

But Geely also holds expertise in the ride-hailing services, as its Caocao operates in 28 Chinese cities. Daimler is not a rookie either, as MyTaxi works in various parts of Europe. 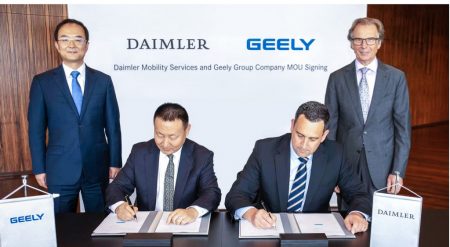 The new 50:50 joint venture is the first major partnership signed by Daimler and Geely, since the Chinese became the single biggest shareholder in the German car maker and is set to offer premium transportation services. The vehicles involved will be top-of-the-range Mercedes models, Maybach included, but Geely might as well add to the fleet some of its own, such as Volvo and Polestar.

Daimler is keen on conquering the Chinese territory, as the company is already working with another local company, Baidu, on a self-driving system that will be implemented within the state.