German car magazine auto motor und sport put face to face the new Mercedes S-Class with traditional rivals Audi A8 and BMW 7 Series. Due to the fact that at the time of this comparative test, Mercedes had not yet launched the PHEV version S 580 e , in the test participated  Mercedes S 500 with mild hybrid propulsion up against Audi A8 60 TFSIe and BMW 745e, both with PHEV propulsion system.

Audi A8: the engineer from Ingolstadt

The ambitions of Audi are not inferior to those of Mercedes. Since 2017, when the current generation debuted, the A8 could have driven autonomous on the highway, although this has never happened (level 3 of autonomous driving)- for reasons of legislation, says Audi.

Otherwise, it offered headlights with laser technology, active air suspension and 40 assistance systems. The A8 is a car that has been engineered down to the smallest detail, with LED Matrix reading lights for the rear passengers and two touchscreens that provide haptic feedback.

It takes some time to get used to operating this system, not only because of the abundance of functions or because the air conditioning is controlled from a touchscreen, but also because you can set many functions through several menus, although you rarely get the impression that you reach to them on the shortest path. Of course, many can be controlled with the help of voice command, but for that, you have to press a button first.

Let’s move on to the grandeur with which the A8 transports its passengers, in front on comfortable, heated and ventilated seats, and in the rear, on a bench with almost the same level of comfort and with almost the same space that you find in Mercedes. However, due to the battery placed in the rear, the floor of the trunk is raised, so the volume available for luggage is only 390 liters, 30 less than that of the BMW – after all, a ridiculous value for a sedan of 5, 17 meters. 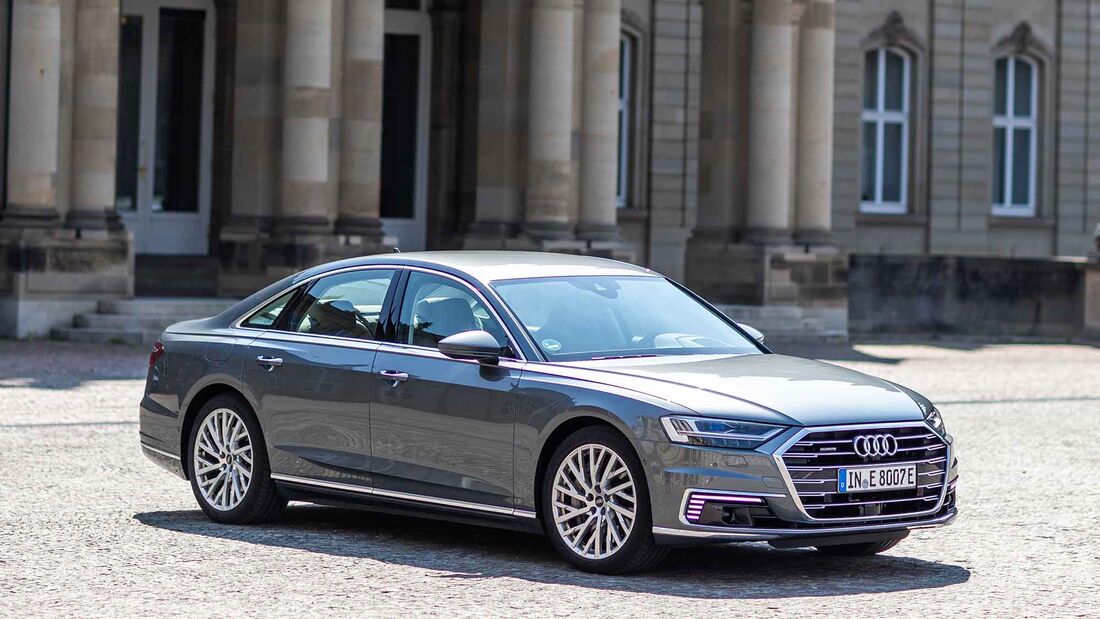 The A8 compensate this disadvantage by the fact that it can be driven electrically, thanks to the plug-in technology. On the one hand, the 14.1 kWh capacity of the battery is enough for only 43 km in strictly electric mode, and on the other hand, no one buys such a limousine to run electrically in the city, but for long journeys. Thus, the distance that can be covered by the electric motor is so small that it does not justify the disadvantages in terms of space and weight. Finally, the battery can be charged to a maximum of 7.4 kW in two and a quarter hours.

With an empty battery, the A8 60 TFSI is driven like a normal hybrid, the electric motor integrated in the transmission providing extra power to the V6 turbo engine from energy recovery (maximum 80 kW). But the power infusion and recovery are not as refined as at BMW, also because the A8 is designed to recover energy when it automatically adjusts the distance to the car in front.

Sometimes it decelerates sharply at first, but then the system relaxes, so the driver has to brake quickly. Although it accelerates steadily and quickly, the sensation is not what you would expect from a system capable of delivering 449 HP and 700 Nm. In addition, with 10.7 l/100 km average consumption measured in the test specific to hybrid models, it is not nearly as efficient as the data sheet says, because of the hesitant gearbox, but more due to the fact that A8 has a weight of 2338 kg, with 279 more than the 7 Series.

More accuracy would be good for maneuverability, whether in relaxed or dynamic mode, but the A8 remains slightly confusing in this regard – it is precise in corners, tilts less than other models, but still due to poor feedback of the integral steering, otherwise harmonious, does not develop a close connection between the driver and the car.

On the other hand, the air suspension reacts a bit harder when the car goes over small bumps. As a result, the A8 drives a little stiffer, but without reducing the high level of driving safety. But can it reduce its chances of winning this comparative test?

Because BMW added new things to the 7 Series, on the occasion of the facelift in 2019. Not only in the front, which is 5 cm higher and is adorned with the new radiator grille, which is 40% bigger. Americans and chinese like it. There are also news behind it. A new powertrain works in the plug-in hybrid 745e, replacing the 2-liter four-cylinder engine with a 3-liter inline six-cylinder with 286 HP, combined with an 83 kW and 265 Nm electric motor integrated in the eight-speed automatic gearbox.

In the test, the 7 Series power plant allowed an electric range of 49 km, thanks to the battery with a capacity of 12 kWh, and the maximum speed in electric mode was 140 km/h. Charging is only possible with 3.6 kW, an operation that takes about three and a half hours. BMW is trying to turn this into an advantage, as the navigation system offers details about sights, restaurants and accommodation options near charging stations. However, the confidence in the hybrid’s strengths does not compensate charging at a such low speed. 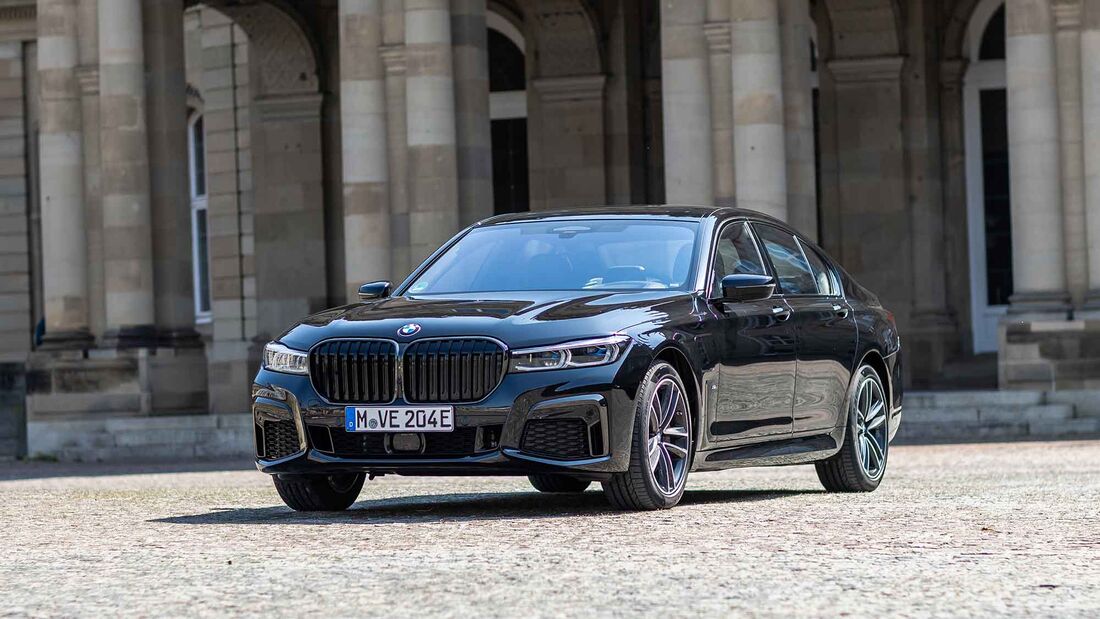 Like the A8, the 745e is significantly cheaper than the S-Class and, with an average consumption of 9.8 l/ 100 km in hybrid mode, is a much more efficient alternative to V8 engine, which is only marginally faster. In addition, the internal combustion engine andelectric engine operate in harmony. The electric motor develops power smoothly and vigorously from the start, pushing hard the car with rear-wheel drive, while the automatic transmission goes through the eight gears with a discreet perfection.

The speed required by the propulsion matches the maneuverability. The direct but not brutal integral steering – standard at 745e – guides the sedan through high-precision cornering, but with insufficient feedback. BMW is driven as safely as the Audi A8, which has standard all-wheel drive. When accelerating when cornering, it can fight for traction, but never for stability, when there are bumps on worse roads.

While the Audi is firmer, BMW’s air suspension is more responsive to bumps, without the car swaying. In terms of comfort, the 745e has comfortable sports seats, with a lot of side support, in which you can easily cross half the continent, if you should not stop very often because of the small tank (46 liters). Small range, too firm cushion of the bench, relatively narrow space in the rear, virtual display of on-board instruments with few configuration possibilities and small display of the multimedia system which has multiple control possibilities (gestures, voice control, controller, touchscreeen) and excellent ergonomics are among the small weaknesses of the BMW 7 Series.

The 7 Series meets here a rival against whom it cannot afford the slightest weakness. With all the innovations –  two more airbags in the rear, in the backs of the front seats, and two more optional, in the seat belts, digital LED headlights that can even transmit symbols or guidelines on the road, in narrow spaces, voice control in 27 of languages ​​of the MBUX multimedia system and the new head-up display that projects information in front of the car, as if they were displayed on a 77-inch screen, S-Class establish again new standards in the luxury class.

The most sensational thing is the way the Mercedes S 500 4Matic is driven. Once or twice a week, we go out on a long road, on routes where we know every curve, every hilltop, every slope. With the S-Class, we barely recognize them. Strictly speaking, there are only two qualities that define the character of a luxury sedan: sovereignty and comfort. The S-Class again sets the standards in both respects.

The A8 and 7 Series also have air suspensions, but in both the suspension is firmer compared to the Mercedes, which floats imperceptibly on large bumps. A timid “padom-padom” sound is heard on short bumps, but it’s not unpleasant. On long bumps, the suspension absorbs rolling easily and without disturbing the car’s occupants. The bright comfort of the suspension completes an almost unshakable driving safety. Even at high speeds, the Mercedes S 500 4Matic can be easily steered in corners, more precisely than we would expect from a 2.1-tonne heavy sedan. It does not slip in understeer, it does not push in oversteer, it turns neutral, with a determined serenity, always with a consistent safety and yet with suppleness and agility. 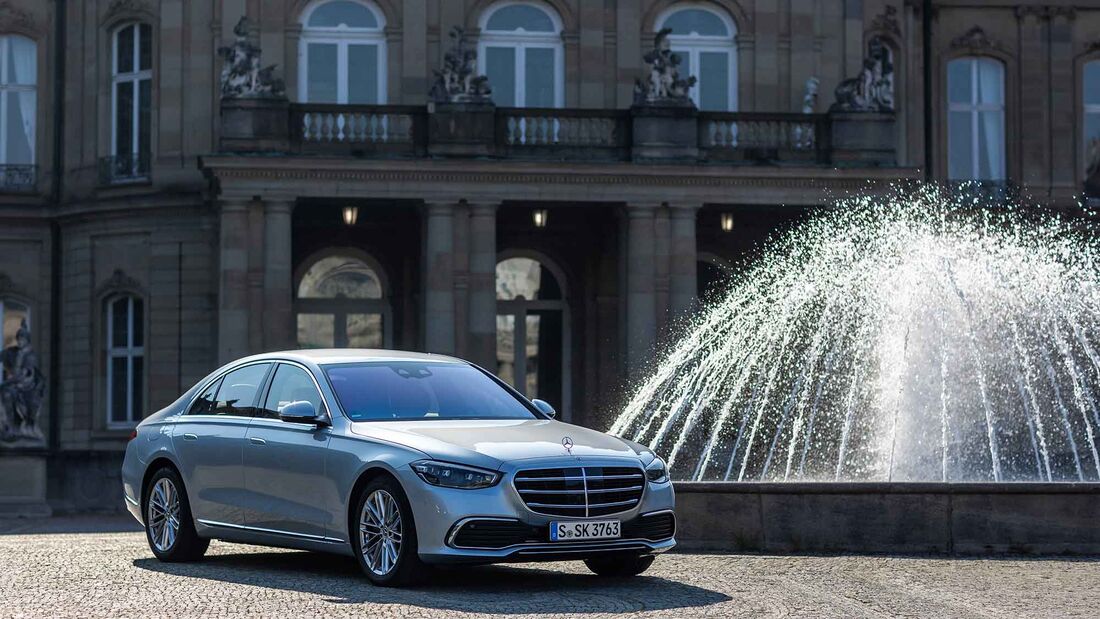 The new integral steering contributes a large part of the energy involved in handling. The rear wheels rotate counterclockwise by a maximum of 10 degrees relative to the front wheels  at speeds of up to 60 km/h, which gives the S-Class a compact maneuverability. For an imposing length of 5.18 meters, this is so unexpected that passengers become pale and dumb when you demonstrate it in the multi-storey car parks with spiral access – so close to curbs, so close to poles, you can not reach with no other limousine with a wheelbase of 3.11 meters or similar.

And on the road, you need two or three turns to get used to it and not oversteer too much the car. But then everything is clarified and fits into the overall harmony of the S-Class. The air suspension, which becomes firmer in Sport mode, thus reducing the roll, but without disturbing the bumps. The direction, which, in addition to agility, increases sovereignty in fast highway turns, because at over 60 km/h, the rear wheels rotate in the same direction as the front ones. This further increases the already outstanding driving safety, which makes the Mercedes S 500 4Matic so relaxed.

The grandiose front and rear seats and outstanding ergonomics contributes to the relaxed life on board of the S-Class. Despite the overabundance of functions, it is surprisingly easy to operate through the menus – apart from the mini-touches on the steering wheel. Assistance systems work with subtle perfection for the driver and also take over lane changes from the highway. In addition, there is a lot of peace in the Mercedes, only the wind blows lightly around the body, while the refined operation of the inline six-cylinder engine is accompanied only by a slight murmur.

The engine has a mild hybrid system and benefits from the excellent support of the nine-speed automatic transmission, which is as emphatic and practical as it is efficient (10.2 l/100 km), as are the Plug-In hybrid propulsion systems from the 745e and A8. All its strengths justify the high price of the S-Class, which does not want to be a sand castle in the way of the wave of progress, but a rock. 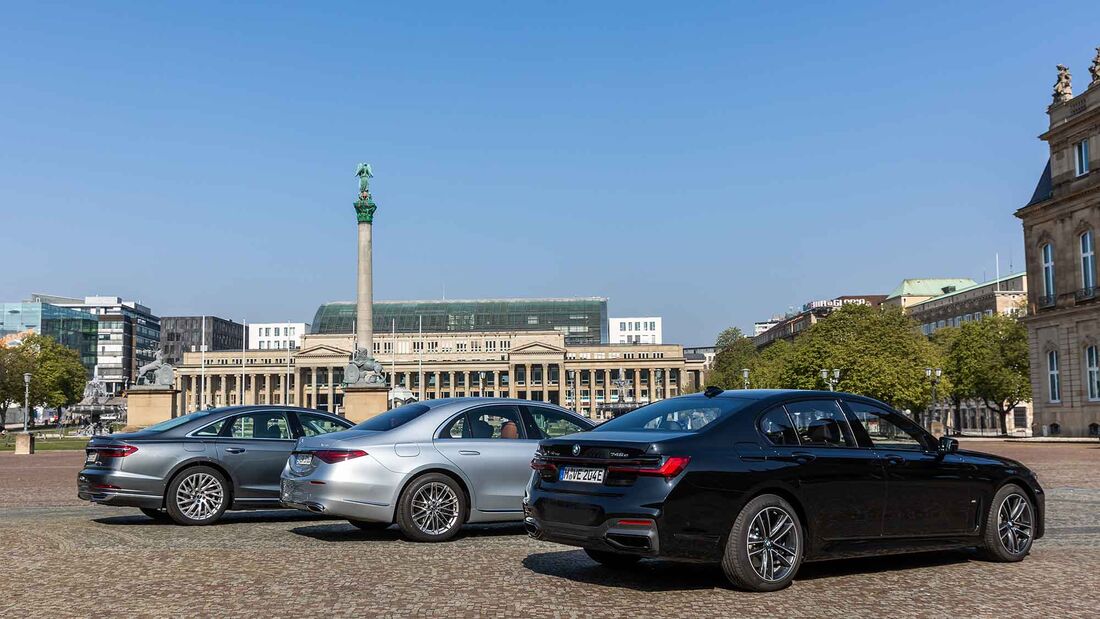 3. Audi A8 60 TFSIe – 630 points
The A8 is the symbol of Audi for what is technically feasible, not consistency. Neither particularly           comfortable nor agile, engine with good performance, poor efficiency.