In the coupe SUV segment, it’s like in the Champions League. In the higher phases, the competitors are about the same, being extremely difficult to penetrate among the “giants”. In particular, the SUV-coupe segment is a purely German business, in which only Porsche, BMW, Mercedes and Audi play.
The segment was invented in 2008 by BMW, which enjoyed the privilege of having no competitors for 7 years, in an automotive industry where, as a niche appears, it is immediately occupied. The X6 had to face a rival only in 2015 when the first generation GLE Coupé appeared. Meanwhile, the BMW X6 has reached the third generation, launched at the end of 2019, while the new GLE Coupé appeared in the summer of 2020. Our test confronts the versions with inline six-cylinder diesel engines, all-wheel drive and automatic transmission. 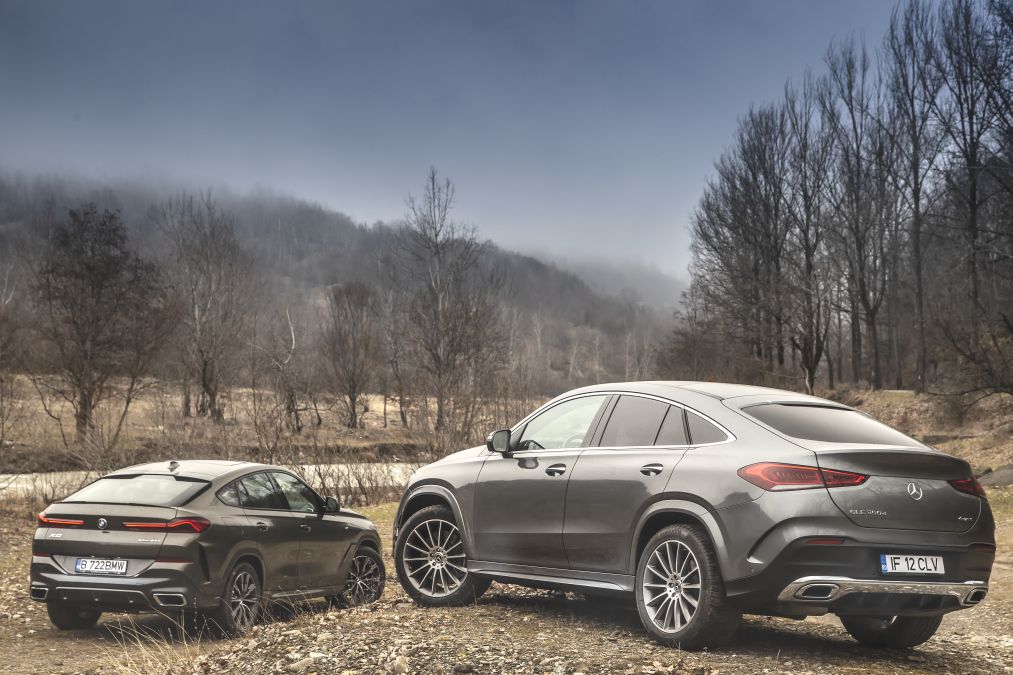 In a simple definition, coupe SUVs are derived from equivalent SUVs, have less space in the rear and trunk and cost more than the SUVs they come from. So why do people buy them? Because they are fashionable, and the combination of SUV and coupe is attractive, inducing the idea of ​​sportiness to a tall and heavy SUV.

As I said, the interior space is narrower than the SUV from which each one comes. Here is always a conflict between the designer who wants a silhouette as close as possible to a coupe and the body engineer who wants an interior space as practical as possible. The first-generation X6 had a strongly tilted rear window and the rear passengers hit the ceiling with their heads. In this case, the designer won.Instead, in the first generation Mercedes GLE, the engineer responsible for the body triumphed. There was plenty of headroom in the  for rear, but the rather vertical rear window had nothing to do with the idea of ​​the coupe. From the side, the GLE Coupé was a little unsightly, with a “hump” that was not only elegant.

What’s the situation now? Mercedes tilted the rear window more and with the design of headlights and taillights developed in the horizontal direction the new GLE Coupé has a slimmer silhouette, closer to the idea of ​​the coupe. What did BMW do? The Bavarians did not want to give up the idea of ​​a coupe and kept the rear window very inclined, but they pushed it back as much as possible, thus ending close to the aileron. What resulted from that? The headroom is decent in both models, in the sense that, in neither, the 1.80-meter-tall people hit the ceiling with their heads, but Mercedes still offers a little more headroom in the rear.

Although both models have generous wheelbase, the knee space is not impressive compared to the SUVs they come from and, although BMW has a 40mm wheelbase advantage, it is not palpable when you take a seat.

Both models have a practical trunk, except for the high loading edge caused by the coupe line. The bench is divisible 40/20/40%, and by folding it you get a perfectly flat surface. Under the floor of both models there is another practical compartment, but from here on the differences appear.

Mercedes has a 75-liter larger trunk, but at BMW you can fold the seat segments from two levers in the trunk, and the floor of the trunk has a shock absorber that allows it to be kept open. Both have a button for lowering the air suspension in order to load heavier objects.

How do you feel in the driver seat? Contrary to expectations, the driving position in BMW is very high for a BMW. BMW said that the so-called Command Position is the wish of the clients, although it is not traditional for Bavarian models, where we are used to stay on a seat very close to the floor. But not on SUVs.

In Mercedes, you stay a little lower, but this is not relevant to driving dynamics. Both models had the sports packages, AMG at GLE Coupé (3.272 euro AMG Line Exterior, 952 euro AMG Line Interior) and MSport at BMW (5.200 euro).

In terms of ergonomics, both offer many operating options and both have strengths and weaknesses. In both, the controls are tactile, vocal with notions of artificial intelligence (for example, you say “I’m cold” and the temperature rises and the heating of the seats is started), classic and even gestures, the latter mode existing only at BMW.

For the classic control, the BMW controller remains the most practical and precise solution, while the new touchpad from Mercedes is not the most precise and the easiest to operate while driving.

And we appreciate more the separate air conditioning block from BMW, although the tactile one from Mercedes is also easy to access.

Instead, at Mercedes we like the two mini-touches on the steering wheel, with which you operate the dashboard menu (the one on the left) and the menu of the multimedia system (the one on the right) without taking your hand off the steering wheel. At Mercedes, you have several options for displaying the instrument cluster and they are very easy to operate, while at BMW the layout of the instrument cluster is dictated by the chosen driving mode without other options.

With Nappa leather and faux leather on the doors and the top of the dashboard at Mercedes and Merino leather with extended content at BMW, the interiors of the two models look very premium. BMW wants to impress with the CraftedClarity trim which come with the controller and the start button covered in glass, but there are no obvious differences in assembly quality.

How are they driving? With a weight of 2290 kg each, it is difficult to beat the laws of physics, but we still have high expectations from two models bearing the name “coupe” in the name.

Standard, both fighters come with an adaptive suspension, but the test models had adaptive air suspension with ground clearance adjustment (2142 euro at Mercedes and 2100 euro at BMW).

At both there is a more sophisticated option, BMW’s Adaptive M Professional, with active stabilizer bars and integral steering (4600 euros, in combination with MSport), which reduces rolling and improves dynamics, and E-Active Body Control (7735 euros, with individually controlled shock absorbers), which brings extra comfort due to the Curve function and Road Surface Scan which “read” road irregularities and adjusts the suspension accordingly.

Returning to the test equipment, with air suspension on both models, whether we set the Sport or Comfort mode, BMW feels stiffer and tilts less corners than Mercedes. It is obvious that the BMW’s suspension is much firmer, which generates a smaller roll, even if the X6 has a higher ground clearance of 216 mm compared to 206 mm for the GLE Coupé. 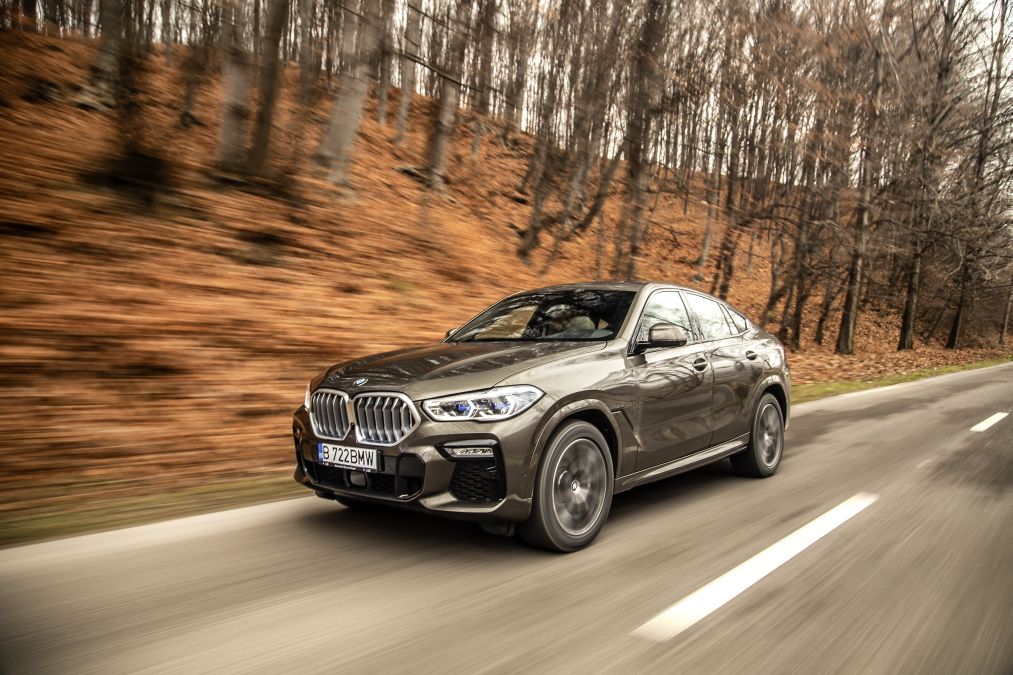 The X6 feels more engaging thanks to a heavier and more incisive steering, while at Mercedes the steering is more assisted. In the succession of curves, BMW follows the trajectory with surgical precision and it is a small miracle of physics that this monster can be so agile at double changes of direction in alternating curves.

Instead, Mercedes offers more comfort, especially when overcoming short bumps, which BMW passengers feel even if the suspension is set to Comfort mode. And that happens even if Mercedes has larger 21-inch rims with mixed tires, while the test BMW was equipped with slightly smaller 20-inch rims, worn with winter tires, like the Mercedes. 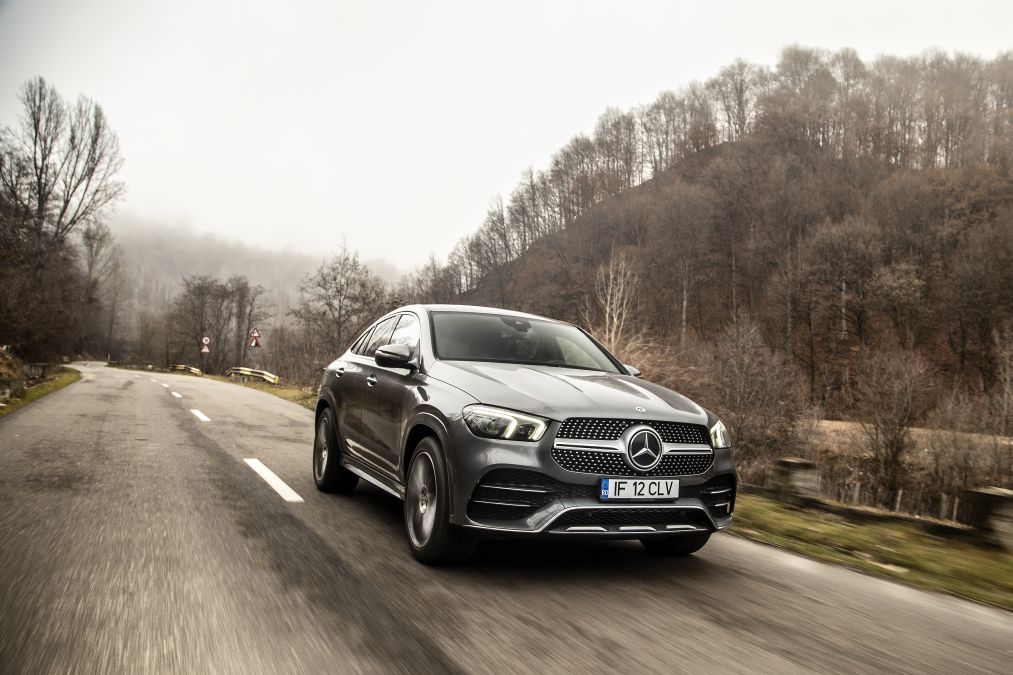 The engines of the two models have a very similar construction – 3 liters, two turbines, six cylinders in line. The perfect comparison would have been the X6 xDrive40d with 340 HP versus the GLE 400 d 4Matic Coupé with 330 HP, but the test model, the Mercedes GLE 350 d 4Matic Coupe, develops only 272 HP from the same inline six-cylinder engine with a displacement of 2925 cm3.

In addition, BMW’s engine received an upgrade last year, a mild hybrid system at 48 V, with an integrated starter-alternator that provides 11 HP. In addition, a small 11 Ah battery powered by the 48 V network stores the energy from braking and then helps the heat engine at start and acceleration.

How do they feel driving? The extra power and torque of BMW, 68 HP and 100 Nm, is found in faster acceleration by 1.1 seconds and top speed by 19 km/h. BMW’s integrated starter-alternator, which helps at acceleration, forgets any turbo lag, and the X6’s engine responds spontaneously from 1000 rpm. 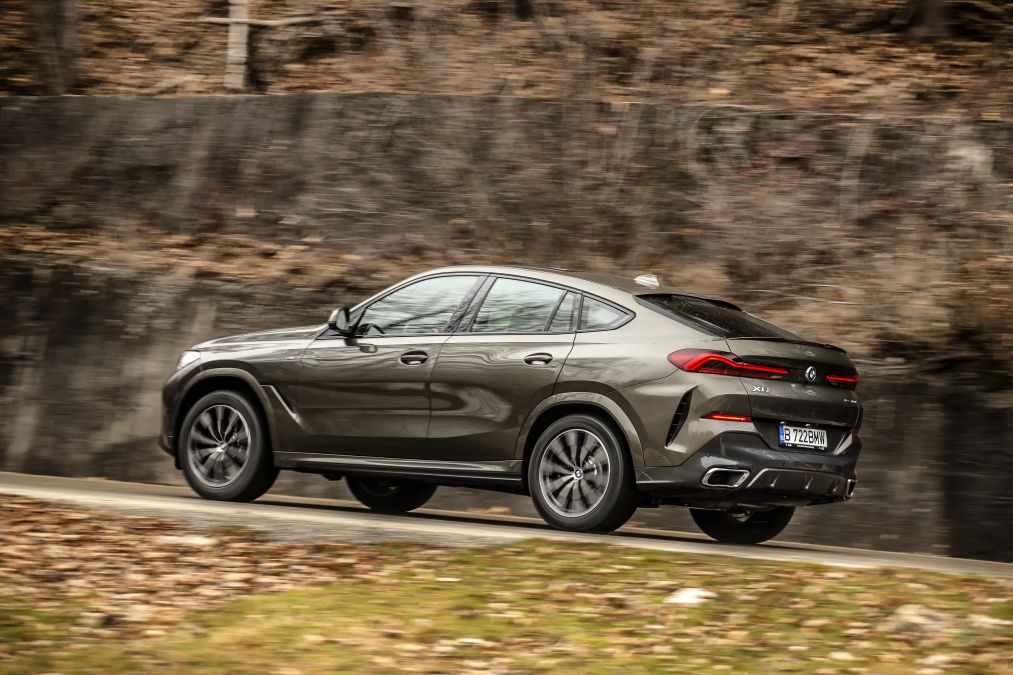 However, Mercedes admirably makes up for the lack of an integrated starter-alternator, with a better optimized torque curve, the maximum of 600 Nm being available from 1200 rpm (1750 rpm at BMW), and therefore, even in this case, the turbo lag doesn’t feel at all.

The refinement of the powertrain is also ensured by the excellent gearboxes, with eight gears for BMW and nine for Mercedes. At Mercedes, the gearbox is more refined in Comfort mode and it doesn’t feel at all when you change gears.

BMW’s engine can be heard at acceleration, but it’s not that unpleasant diesel sound, but an exciting sound, maybe because the MSport package also comes with the MSport exhaust system. Instead, Mercedes engine is very silent and is almost unheard in the passenger compartment, even at full load. 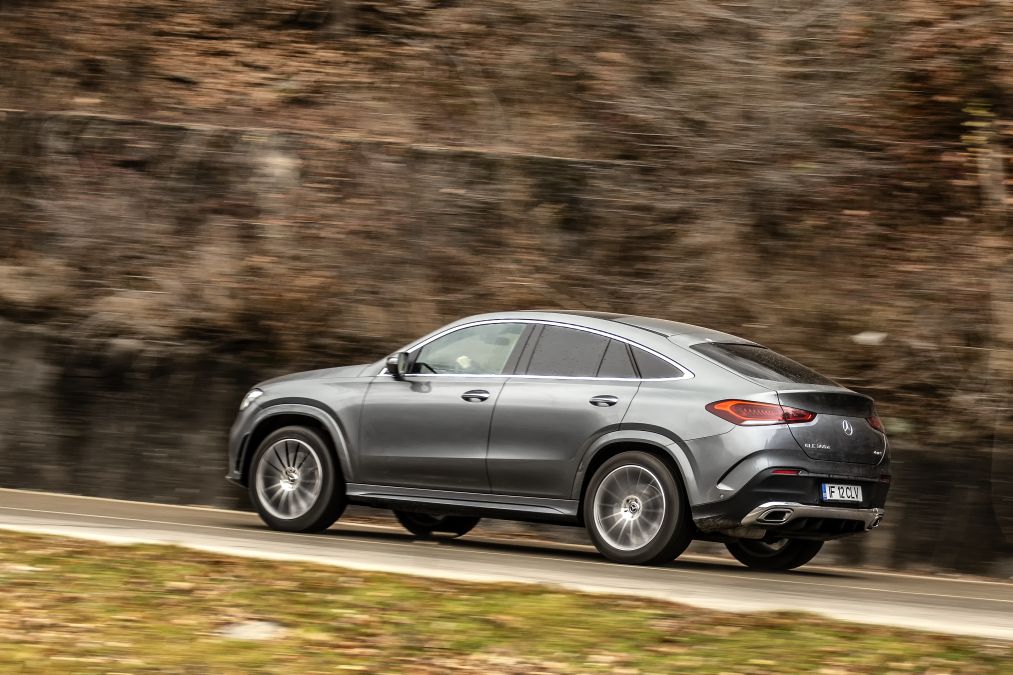 In the consumption discipline, surprisingly, BMW’s more powerful engine displays lower official values. The mild hybrid system, which helps to start and accelerate, but also stops the engine in coasting mode and at speeds below 5 km/h, has an important contribution. 7.1 l / 100 km at BMW and 7.7 l/100 km at Mercedes are the official data, but in reality they are higher, at least 9 l/100 km at BMW and almost 10 l/100 km at Mercedes. However, at these performances and weights, the consumption values ​​represent an impressive business card.

Mercedes GLE 350 d 4Matic Coupe
More spacious and extremely comfortable, the GLE Coupé retains the traditional qualities of the brand. It consumes more than its rival, but the price is unbeatable thanks to better standard equipment.

BMW X6 xDrive40d
A very powerful engine, which, thanks to the mild hybrid system, is more economical than the one from Mercedes. Superb dynamics and very good ergonomics. The price is a bit high.