Not easy for a bachelor to write about family cars, but maybe that is just the exact disparity gives him the advantage to analyze various aspects. In the fever time of the MPVs or crossovers, I personally appreciate the estate cars. In this test, we put rear to rear two premium models, that turned out to be more and more efficient for the past years: Mercedes-Benz C 220d T-Model vs. BMW 320d Touring xDrive.

The Mercedes-Benz Clasa C T-Model trades on the popularity this generation (S205), launched in 2014 has enjoyed, while the BMW 3 Series Touring has just undergone a restyling and refreshing surgery. From the very first glimpse, we’ve got two seperate approaches. The C-Class is the promoter of a flowing design, with noble lines, that guarantee the typical elegance of a Mercedes-Benz, even though we are currently speaking about an estate body.

The 3 Series comes with an athletic, more pragmatic silhouette; but I am not pointing my finger at it, exactly the opposite. Looking at the profile of the young Bavarian guy, you realize this is how volumes of a vehicle must be rightsized, when the job description requires an estate trunk. Of course, as design is purely relative, I firmly believe that for many, the touches of the C-Class may be the right ones. However you may look at them, both models come with big egos and they prove once more than the estate cars have long stopped being a design compromise.

On the inside, we bump into the same different thinking. More than ever lately, this is where you get to feel the classic classification: Mr. Serious vs Mr. Sporty. Mercedes-Benz vs BMW, that is.

The iDrive system in the BMW is more intuitive while browsing through the menus and its ergonomics is better even though, as a paradox, we encounter more switchers in the BMW. The display of the iDrive system also lays out a better resolution. Those who have never had a Mercedes before, must get accustomed to the lever of the automatic gearbox, placed on the right side of the steering wheel tunnel and with the control of the windshield wipers placed on the lever in the left side of the steering wheel. 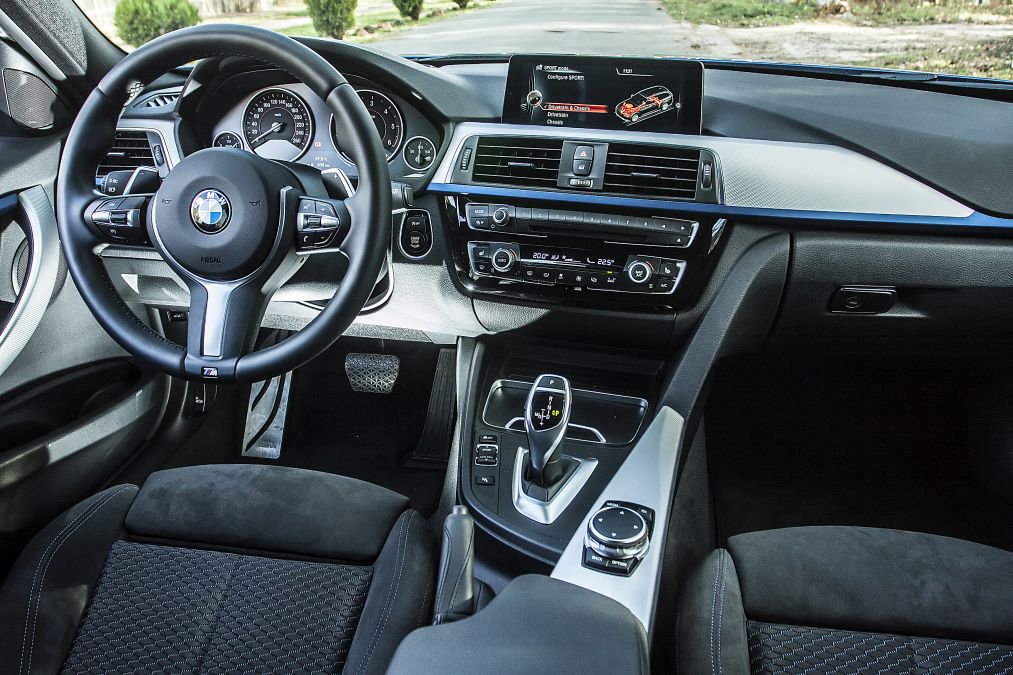 When it comes to the sensed quality, the Mercedes C 220 d T-Model provides a more noble interior atmosphere and a better detailed quality, but the differences are not quite significant.The center console in the Mercedes, wrapped up in black glossy piano plastic, is more elegant than that in the BMW, mainly covered in black plastic.

As for the seats, it is difficult to run a straight comparison, since the two models came with different equipment lines. Mercedes featured the standard seats, while the BMW was fitted with the M Package, which includes sport seats with an excellent side support and cushion adjustment. 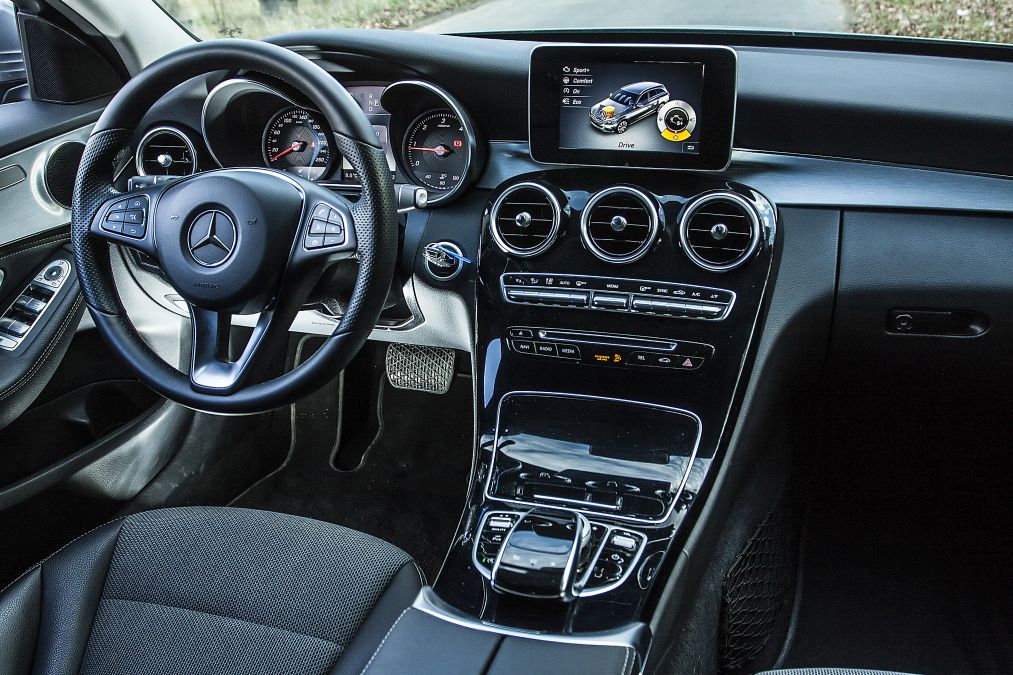 But, because we are talking about family cars, the test of the rear seating bench matters a lot. From the very opening of the door, there is an easier access in the C-Class. In the 3 Series, you must lower a little and this very trick leads to a surprisingly good position in the rear seating bench. Mercedes-Benz provides more room for the knees, partly thanks to the extra 30 millimeters of the wheelbase. Instead, in the 3 Series, the bending angle of the leg from the knee is slightly different and this translates into a quite more comfortable position for an 1,80-meter guy’s legs. The cushion of the rear seats in the BMW is also longer.

The trunks are identical, as the available storage volume is by only 5-liter more for the BMW (490 liters for the Mercedes-Benz). While the loading hole is more convenient for the three-pointed starred model, the Bavarian makes up for it when it comes to the auxiliary systems that put the load in order. An adjustable telescopic jib, fitted with anchorage belts (instead, Mercedes-Benz offers folding boxes, good to have at hand on various situations). Under the boot floor, both models hold extra storage compartments, both hold „intelligent” rolls, which can ascend on the rear pillars to enable access into the trunk.

For the test car, the Mercedes C 220 d T-Model even offers a folding electrical system for the rear seats, an operation that can be run ellegantly, by the simple touch of a button. Both models come with 40/20/40 split rear benches, that, once they are folded, they guarantee a plain storage surface, providing a 1,500-liter full volume in the BMW and 10 liters less in the C-Class. Since we’re at the back, I would menion the parking assistance systems. Only the BMW is equipped with a rear-view camera, but it brought absolute advantage, so it’s good to tick that option. For both models.

Simple figures and the tech specs, only scanned, might say that the 2.2-liter displacement and the rear axle would come as a benefit for the Mercedes-Benz, while the xDrive would make the BMW think it is more of an… Audi. That is because at the beginning of the test, we reminded you about the Audi A4 Avant, a model that settled a great pattern. Estate, premium, four-wheel drive system (I personally believe that an Audi Avant would make no sense without the quattro system), all these „Lego pieces” made the estate car mostly be a family car more than a crossover. Since the Audi recipe proved to be heavy metal in time, both Mercedes-Benz and BMW invested much money in the high-performance all-wheel drive systems. For us, the 4MATIC system in the Mercedes-Benz would mean extra spending of at least 5,000 euros (since it would have been available as included in a package, together with the upgrade from the standard manual transmission to the 7-speed automatic one). Anyhow, the prices of the two models are comparable, if we should consider the all-wheel drive present in both.

The setback is that the Mercedes-Benz engine only delivers 170 HP and is noisier than the new 2-liter and 190 HP engine of the BMW (recently available in the facelifted 3 Series configurator). Further than that, you can even feel a slight sparkle gap, despite the similar torque of 400 Nm. 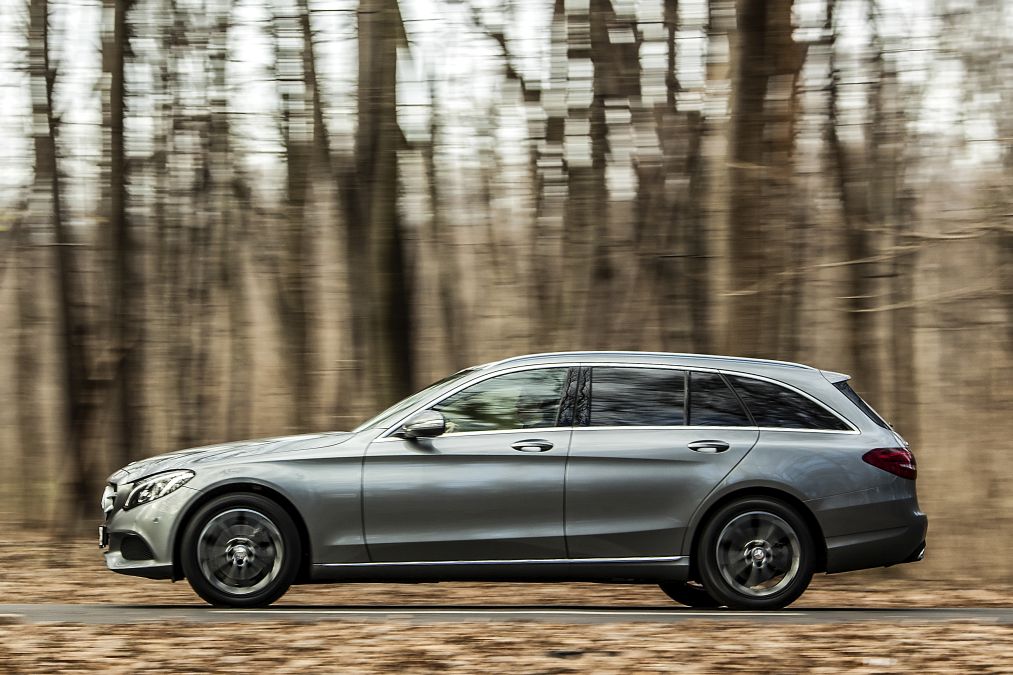 Automatic transmissions are preferable for such models and the one included in the BMW equipment not only has one extra gear, but also a faster response, which is a sporty detail. The adaptive drive trains allow settings that would please just about anyone, from a comfort whimsy-whamsy to a daddy longing for the days he was buying cars with fewer doors.

The standard adaptive drive trains allow different settings for the response of the engine, gearbox and steering and for a cost of about 1,000 euros, the firmness of the suspension is also adjustable. Apart from the BMW, the Mercedes offers a unique option in the segment, the airmatic suspension, which turns the comfort into a piece of art. Unfortunately, it is a costly option, not because of the 1,476 euro price itself, but for the fact that you can only get it with the Exclusive or Avantgarde packages. 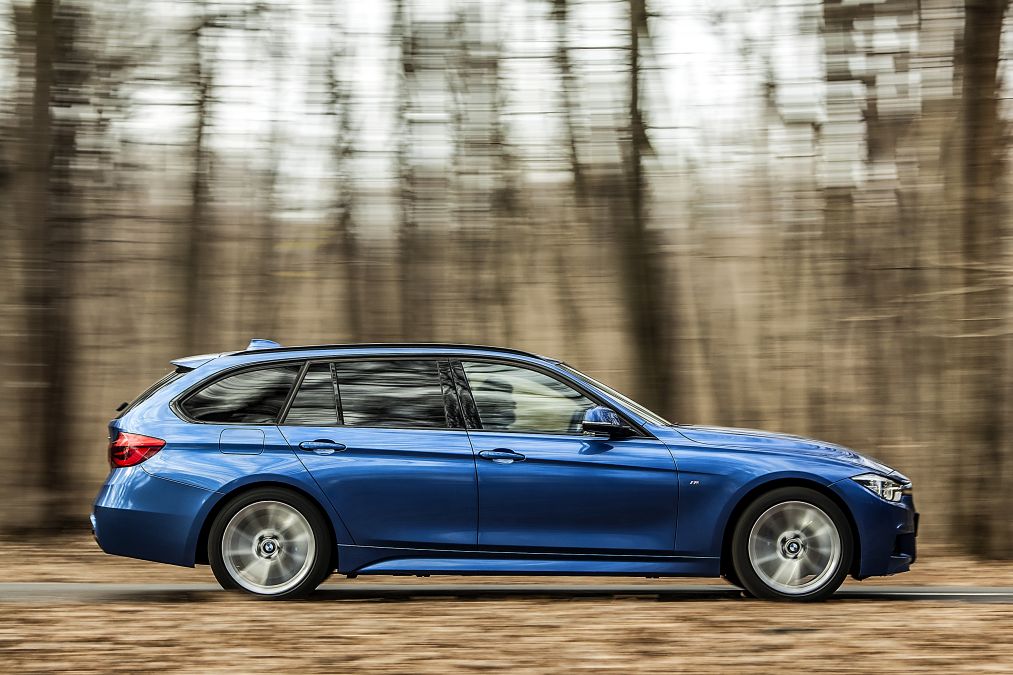 If we relate to the Sport mode, the BMW is playing in a league which perfectly suits it, it is the most capable when it comes to the adrenaline rush, as it features a steering system setting with a better feedback (even though the new settings selected by BMW for the steering of the models are, sometimes, hard to get).

The C-Class C T-Model stays a gentleman in a suit, who steps gently, to keep his shoes clean. If you should come face to face with a lifestyle in which you desired uplifting the long drives comfort, it is good to have the starred key in your pocket, but, if you can negociate with you wife, in favor of a model that knows how to rebel, steer towards the rival. Still, Mercedes has gained miles in agility with implementing the new MRA platform, which dismissed the McPherson type of front suspension in favor of a four link one which isolates the damping from the steering.

Whatever it may be, the choice would be nothing but the best and the assumption that we started with, according to which the Audi would have trembled against any of our protagonists, is proven correct. And, maybe above the duel itself, there is the fact that a crossover is not indispensable, when you can settle for an estate. And it is even more entertaining.

For those who buy an estate car for what it is, a practical car for long drives, in which comfort comes first, the C-Class T-Model is the perfect choice. For the perspective of the sporty character, the BMW is the most exciting option, especially as its engine is vivacious and the gearbox is swifter.