We’ve got in front of our very eyes, no doubt, the best three mid-size premium SUVs: the brand-new BMW X3, the Mercedes GLC and the new Volvo XC60. We are testing the diesel automatic versions, which are still the most popular in Europe, despite diesel debate. Comparative test drive BMW X3 xDrive 20d, Mercedes GLC 250d 4Matic, Volvo XC60 D5 AWD. 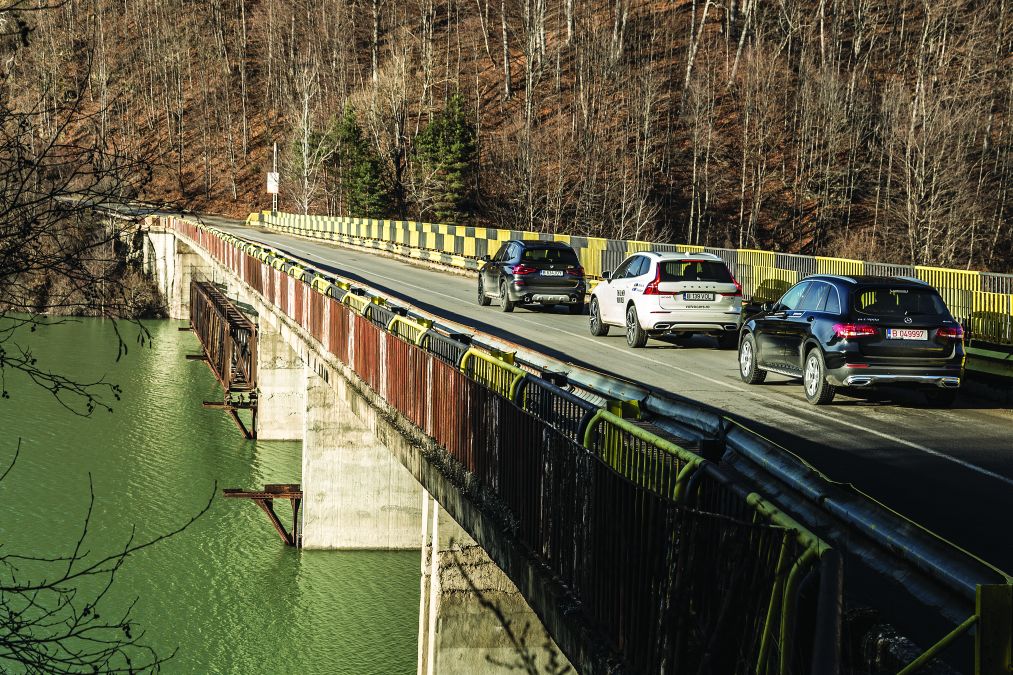 First of all, the three models provide much interior and luggage space for the class standards. Above them comes the Volvo, which is the biggest from almost every perspective, whether we refer to the rear headroom, the front/rear interior width or the rear kneeroom. BMW provides almost the exact same space at the rear and the top interior height at the front, but is a bit narrower. Instead, the Mercedes features the smallest kneeroom at the rear.

One sits best in the Volvo, that comes with well profiled seats and rear bench. We must though keep in mind that we’re dealing with a top R-Design equipment line, with a prominent sporty character. In the BMW, the rear seats feature quite plain seating area and backrests, but also the shortest seating area.
The 40/20/40% split rear seats, adopted first by BMW, have become standard in the segment. The new X3 comes with an additional innovation, benefitting from a separate button located at the base of the seat for changing the angle of the backrest in four different positions, an option that is not available for Mercedes and Volvo.


For all three models, the rear seats are foldable and make an almost plain surface with no threshold, so that it becomes easy to load long and heavy items. All three of them come with a power tailgate, just that it is standard equipment for the BMW, while it costs extra money for the Volvo and the Mercedes.


All three models come above 400 liters in measure luggage space, with a plus for the Mercedes, that provides 450 liters, compared to the 436 liters of the BMW and the 407 of the Volvo. The Benz also comes with the widest and best profiled door map pockets in the front doors, while they are not quite deep for the Volvo.

The new BMW X3 brings no revolution in terms of interior design, but materials are obviously better, with an interesting combination of matt wood and chrome inserts and chrome buttons like in the  7 Series. The ergonomics is similar to that of the former generation, but it makes no sense to change something that came next to perfection. The infotainment system is the most intuitive in the market, it can be controlled in three ways, including gesture control, the location of the controller is just right, the resolution of the display is impeccable and the browsing through menus is the simplest of all out there.

Mercedes has also come a long way, with the structure and the graph of the menus being completely overhaulded, yet the touchpad is not as practical as in the BMW, with the volume button being placed too much to the right and there is no touch control. Even though there are no differences left in terms of plastic quality in the BMW and in the Mercedes, the Stuttgart-made model brings a more aristocratic interior and a tilted center console gives it a sumptuous look.

Volvo borrows something from the Tesla philosophy, going for the tablet-type of ergonomics. At a first glance, everything seems complicated, because Volvo gave up almost all buttons and integrated most of the controls in the tablet. For instance, a whole screen is reserved for the assistance systems. Yet, the menus and submenus layout is quite good and the climate control menu is always at the lower side of the display, regardless of the submenu selected.
In terms of design, the XC60 follows the lines of the XC90 and the progress is obvious in terms of material quality, as the Volvo interior is very luxurious, going by the minimalist concept that goes so well with the Swedish lifestyle philosophy. If, up to the previous generation, the Volvo XC60 was only flirting with the premium segment, it now overtook its rivals and some of the materials are actually better than those of the German models. The Volvos is not an underdog anymore, but a terribly strong player in this segment, and the price raise for the new XC60 generation is perfectly justified not just by the excellent SPA platform, but also by the interior and materials quality.

The new BMW X3 hall-marks a major change, because the new generation focuses more on improving comfort and reducing noise level. The new X3 thus features better sound insulation, especially at full-blooded throttle, when is the most silent and you don’t hear anymore the typical diesel sound. Then the ride comfort is on the up and up, and, with the adaptive suspension with Adaptive mode, the BMW drives just as comfortably as the Mercedes. 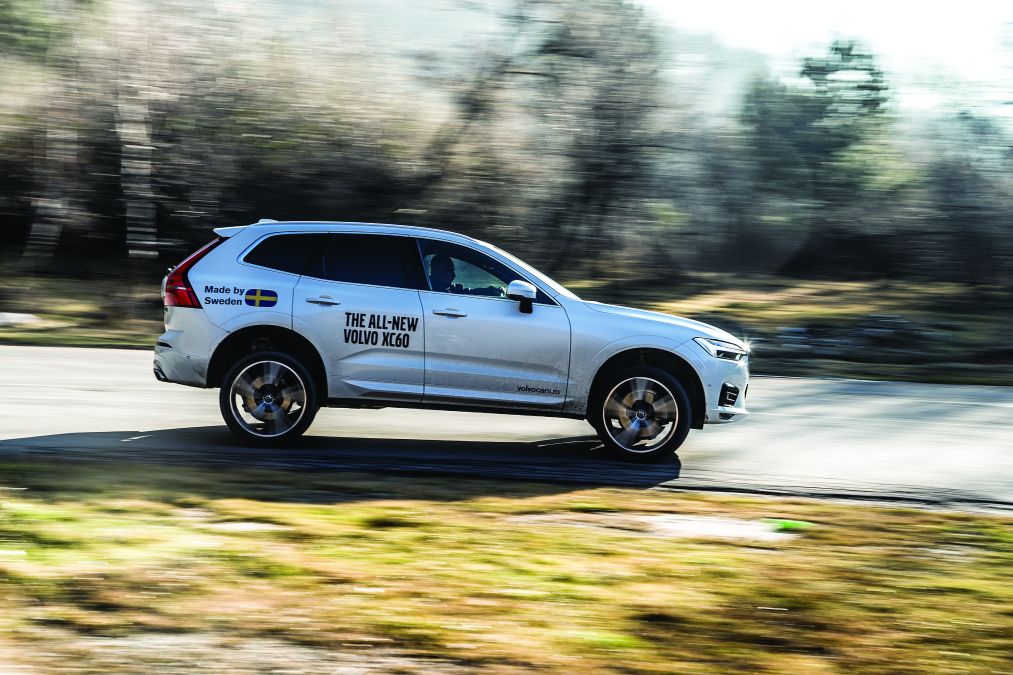 The GLC supplies more comfort even with the classic suspension, with a pneumatic suspension being available as an option.

Fitted with the pneumatic suspension that we had for the test, the Volvo drives like on a plush mat, even when shod with 21-inch wheels. As a matter of fact, the Volvo aimed towards the Mercedes profile, providing a high ride comfort. Even though the new X3 mints more on the comfort side, it still keeps the sportiest road holding. X3 stands as the most poignant and precise. 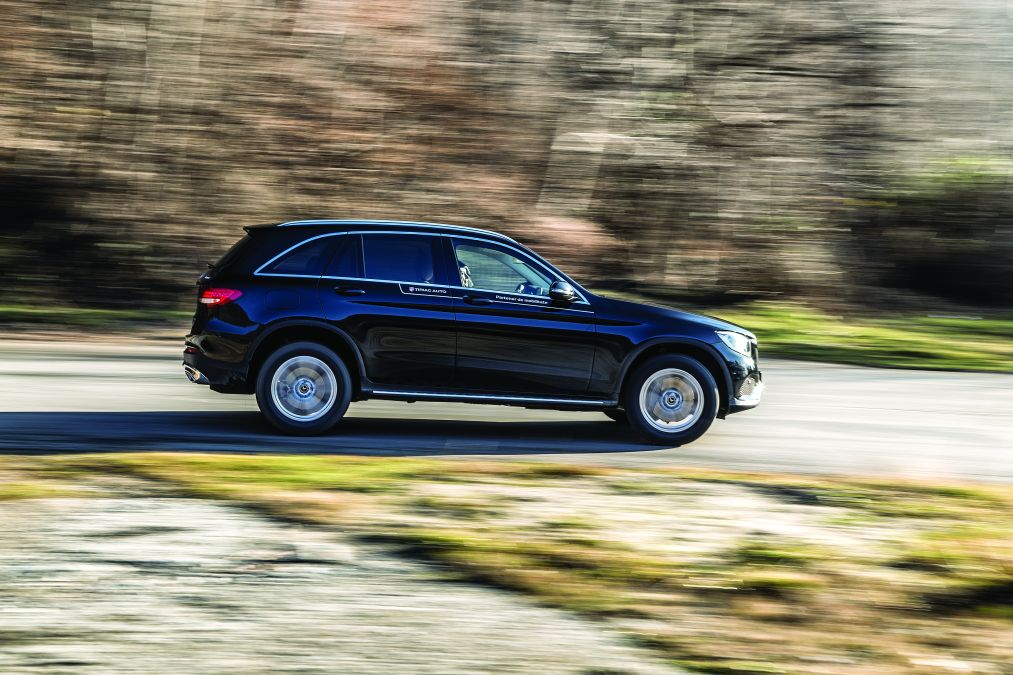 The Mercedes and especially the Volvo go bohemian, providing a bit of a softer drivertrain, with a more obvious roll, but there is one top class drive comfort.

Up to the limit, the Mercedes GLC is understeering pretty much, the ESP cuts in prematurely. But the steering provides good response and it is well grooved.

The reaction of the Volvo’s ESP is just as vigilant, not providing much freedom, as the Swedish put safety first. But the steering is quite soft and not very responsive.

The understeering is more reduced for the BMW and there is a slight, but progressive oversteering when pushed to the limit, and it is well strung by the ESP.

In theory, the Volvo comes with an output advantage, at 31, 45 horsepower respectively compared to the Mercedes and the BMW. But this is not in direct ratio mirrored by the throttles and loads. 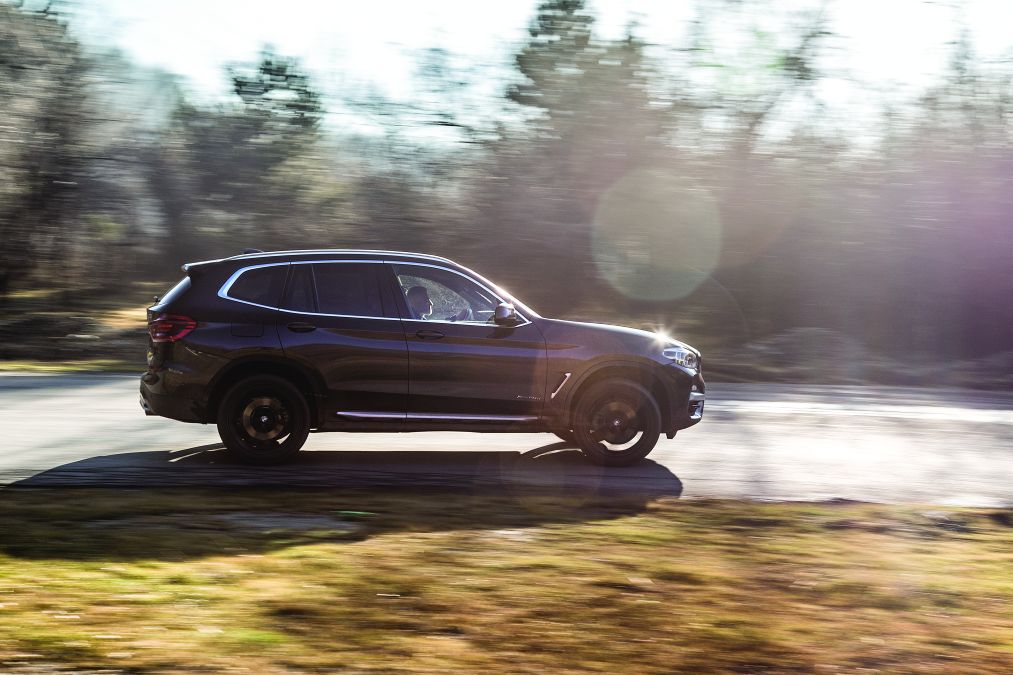 The Volvo is the quickest at high speeds and runs the fastest from a standstill, but compared to the Mercedes,the output gap brings no superior dynamics, maybe because, in terms of torque, the Mercedes provides 20 Nm more, achieved 150 rpm lower.
Instead, the 80-100 Nm less of the BMW can be sensed, but there is no way we can say that the BMW engine does not stage a good performance. Considering the output handicap in front of the Volvo, the BMW engine displays honorable performance. On the other hand, the BMW once again proves its efficiency, being the most economic of the test, but, once again, the gap is insignificant. The BMW is approximately 0.5 l/100 km more economic than the Volvo. We must point out the exceptionally linear response of the Volvo propeller, due to the Power Pulse technology that basically annihilates the turbo lag. For the Mercedes and the Volvo both, the twin-turbo engine comes with advantages in terms of torque availability at lower engine speed.

Both the Mercedes and the BMW require extra money for the assistance systems, while the Volvo is better equipped in terms of safety, offering, as standard, more safety equipment. Actually, this is where the price advantage for the Volvo comes from, making it more convenient than its rivals, without considering the Keyless Go system and the virtual cockpit, that are also standardly fit for the R-Design equipment line, while for the BMW and the Mercedes, the Keyless Go comes for extra money. We must also consider that the BMW and the Volvo were present with highly equipped variants, the X-Line, the R-Design, respectively, while the Mercedes came with the basic equipment line, and an AMG package would make the price skyrocket within the test.
If we adition the extras on BMW and Mercedes which are standard on Volvo, we reach to almost the same level forall three models despite Volvo is more expensive at the base price.

Verdict| The mid-size premium SUVs has reached a high level of refinement. Even BMW which focus on the sporty characteristics has put ride comfort on the priority list. Mercedes and Volvo concentrate on the comfort qualities which are traditional and strong points for both brands. We have to mention the huge progress made by Volvo thanks to the new SPA platform. The swedish brand offer a standard safety package which can be obtained only extra price at the rivals.

It is a genuine safety dome, it benefits from the most spacious and comfortable interior and has a very refined engine. Besides, the price is a bit lower than that of the rivals. It is not as sharp as the BMW and the infotainment center requires somewhat of getting used to it.

Very comfortable and with an elegant interior, the GLC is a genuine Benz and the biturbo engine provides plenty of output backup and is very refined. It understeers pretty much on the limit and at the rear it is smaller than the rivals. Besides, it is expensive.

The new generation hall-marks a major progress in terms of interior and ride comfort quality. It still stands as the sportiest and the most efficient of the engines. Compared to the rivals that are powered by stronger engines, the dynamic performance is a bit inferior and it is expensive.