Jaguar has just introduced its first-ever compact SUV. The new Jaguar E-Pace rivals Mercedes’ own GLA, but can it also beat the German? First test via auto-motor-und-sport.de.

The cockpit of the new E-Pace is driver-oriented. Optionally, a 12.3-inch HD display replaces the classic round instruments in front of the steering wheel. For an additional charge, there is a head-up display available that reflects driving-related information onto the windscreen. It works in contrast to conventional head-up displays not on the basis of laser, but by TFT technology. Both extras are nowhere to be found in the GLA order list.

The new navigation system offers the Arrival Mode: 200 meters before arrival, the destination is displayed in a 360-degree view. There is also evidence of free parking in the area.
The infotainment system in the E-Pace relies on a 10-inch touch screen (format 21: 9) mounted in the center console, which also understands gestures and wipe-moves. Again, this is something Mercedes is not yet offering for their GLA, which can be specified with either a 7.0-inch or 8.4-inch TFT screen and no touch functions, but only the classic rotary Comand controller. In the Jaguar, with Touch Pro and adaptive dampers on board, the screen can display the current G-forces, lap times, and telemetry data for braking and acceleration. 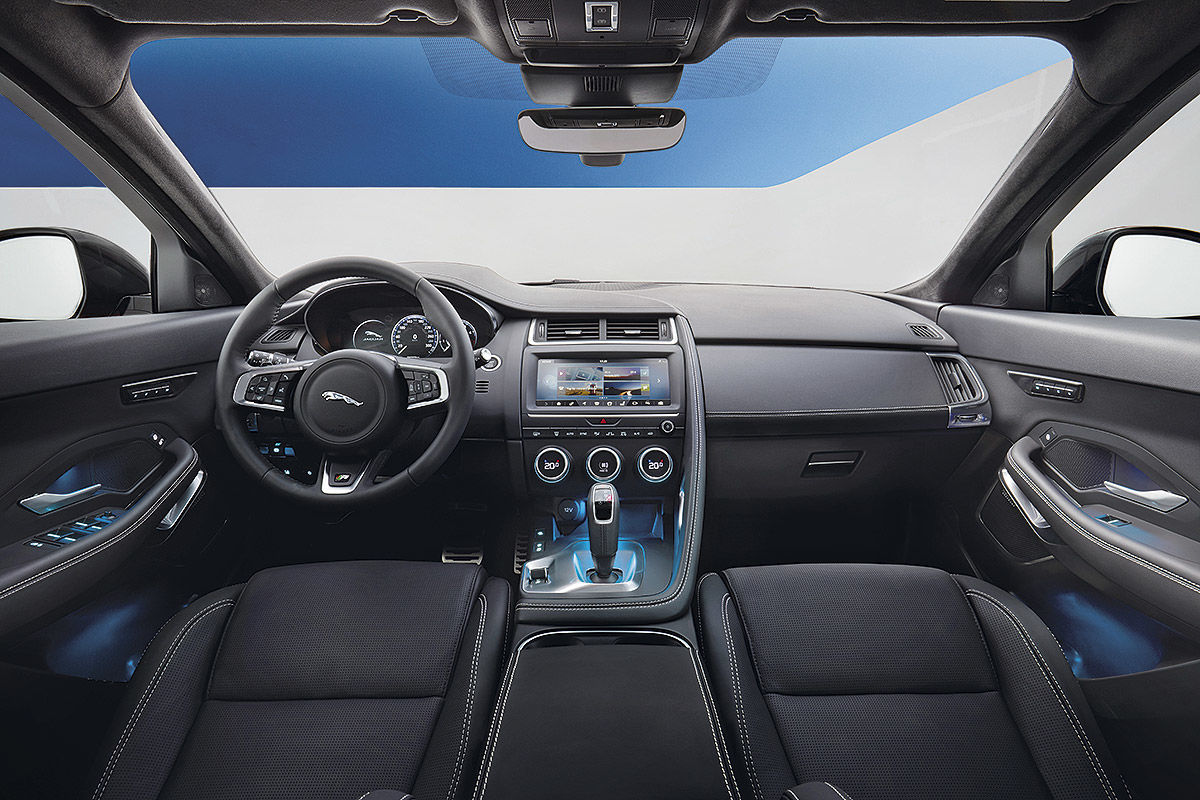 For the first driving impression Auto motor und sport chose the average diesel with 180 hp and the strongest petrol engine available, which makes 300 hp and has a standard four-wheel drive with two electronically controlled multi-plate clutches. This allows the control unit to send more power to the outer rear wheel in turns, for example, which makes the car more agile. When driving straight ahead, the clutches completely decouple the rear axle – this reduces friction and saves fuel. Also, the 240-horsepower diesel has this “Active Driveline” all-wheel drive system as standard. In fact, the E-Pace feels very confident and agile – which also applies to the diesel without active power distribution.

It is interesting, however, not only where the power goes, but also how it arises. The two-liter diesel pushes with great aplomb and turns nimble – it runs quietly, but not too quiet: especially when the gas is pushed, the engine is clearly audible. The test car had the ZF supplied nine-speed gearbox on board, which changes gears quickly and smoothly. However, from time to time it hesitates to choose the right gear and then immediately corrects itself. Standard is the two-liter diesel engines with 150 and 180 hp, a six-speed manual transmission, the automatic costs € 2,425 extra.

The strongest gasoline engine with 300 hp sets off when needed really fast. But because the four-cylinder is noisy at high speeds, it does not seem so much sovereign, as it can be surpassed by the higher performance and the objectively excellent performance of the 240 hp diesel. Also in terms of  running culture and noise, the gasoline engine can only minimally set off the diesel. Mercedes has two top gasoline versions: the 211 hp 2.0-liter turbo (GLA 250 4Matic) and the overtly sporty Mercedes-AMG GLA 45 4Matic with 381 hp. The E-Pace falls in between in terms of power, acceleration, but not price: Jaguar asks 60.550 euro while the GLA 45 AMG with 81 hp more starts at 56.852 euro. 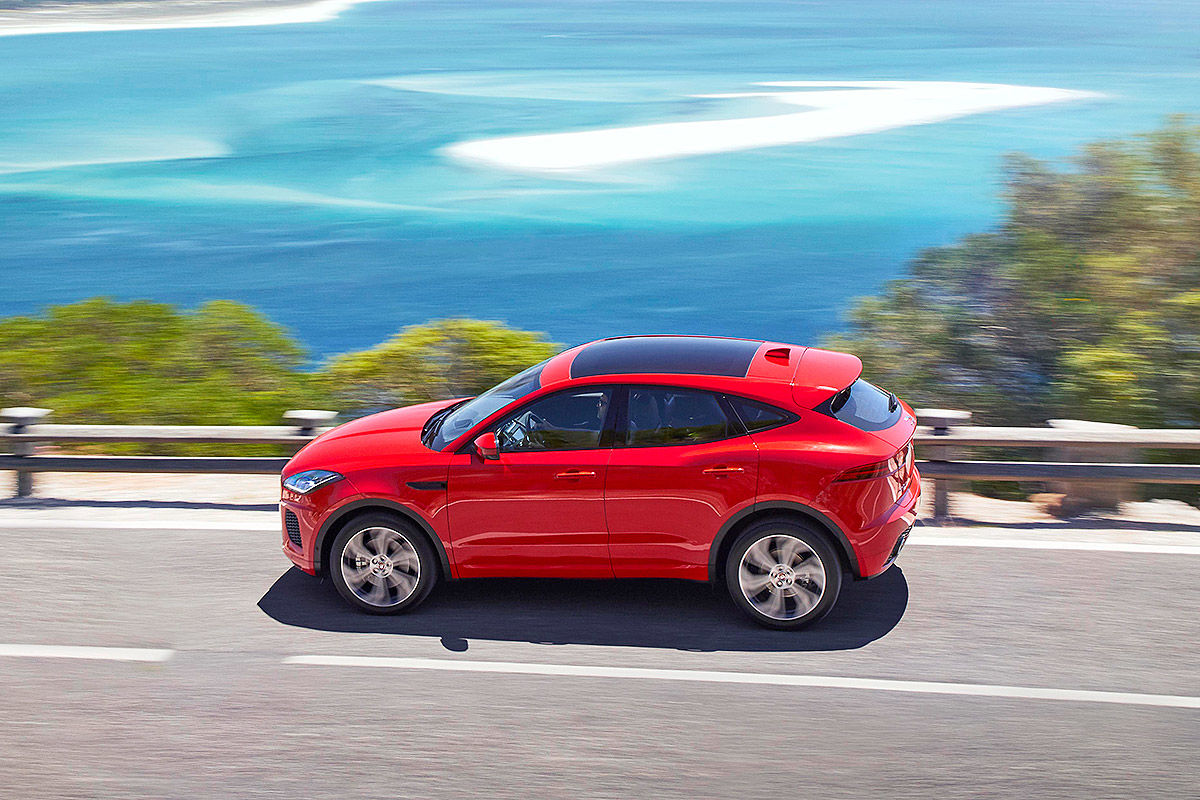 The chassis offers a little too much feedback, being overtly rigid most of the time. Visibility is not stellar either. The A-pillar is always in the way and to the rear, the overview is bad: the rear window is very flat, the C-pillars are wide and placed in the field of view. Good thing every E-Pace comes as standard with parking sensors and rear-view camera. The flat roof line and the strong indentations on the side do not cut the seat space on the rear seats, but the maximum trunk volume (577-1.234 liters) corresponds to the capacity of a compact. The GLA is not much better: 421-1.235 liters of luggage space. The rear passengers – two can sit comfortably and have enough space up and to the sides. For the legs, however, it gets cramped when tall people sit in front and behind and the same applies to the GLA, even if the Mercedes is the longer car at 4.424 mm versus 4.395 mm (wheelbase 2.699 versus 2.681 mm). 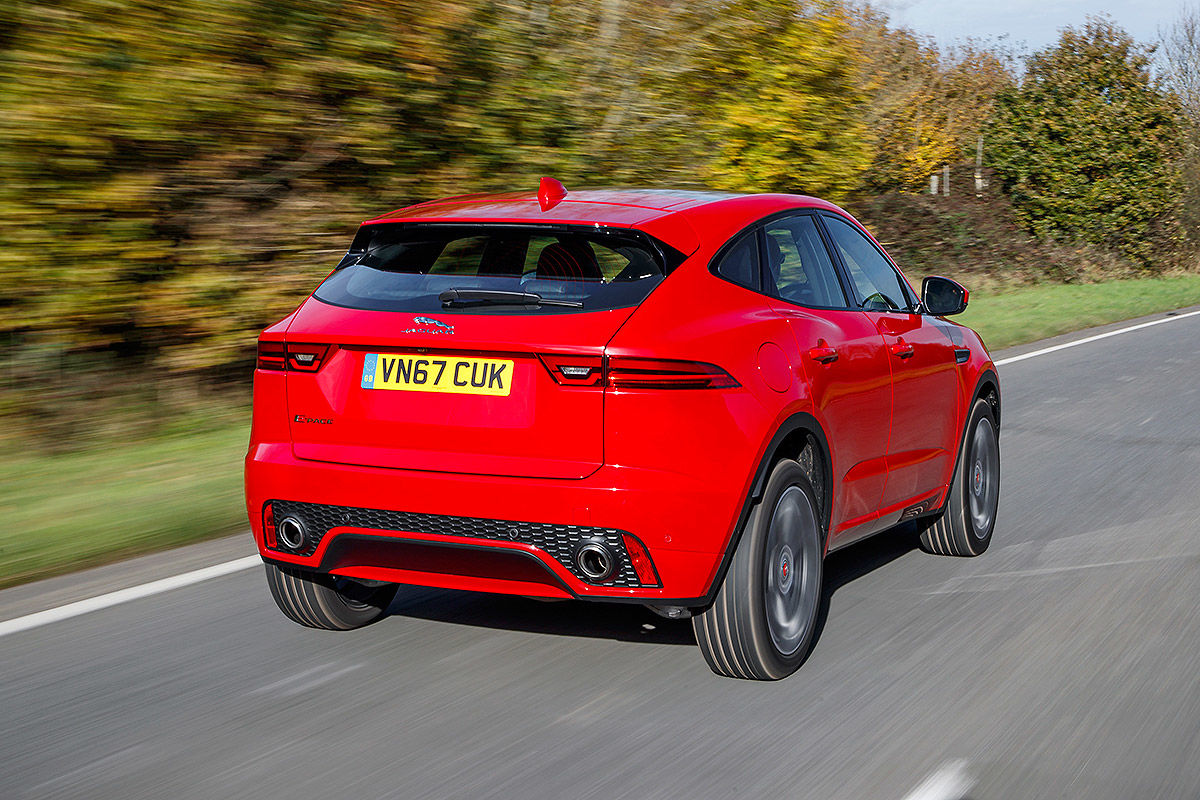