Mercedes-Benz comes with a new research vehicle, one that is used to study the behavior of pedestrians interacting with the autonomous cars. The Co-operative Car is actually a modified S-Class saloon, fitted with a new type of sensors, with lighting strips and speakers.

The study reveals that the traffic participants on foot feel way more comfortable around autonomous vehicles, when they are clearly marked out. There is no one in the driver’s seat, indicating to them that he sees them and they can cross the street safely. But the Co-operative Car cooperates with them and lets them know they have been observed. A turquoise aura, a color not used conventionally on vehicles, signals that the vehicle operates driverlessly. Mercedes-Benz thus hopes that it will become the international color for autonomous cars, since it does not interfere with traffic lights, nor emergency vehicles visual warning. 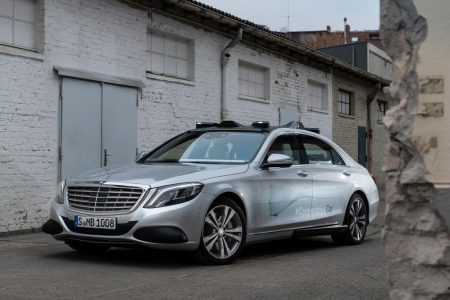 Turquoise LED strips, with rounded strips in each roof corner, using sensors to monitor the pedestrian activity in the vicinity, point out that it is not a conventional car. Such sensors, together with cameras, spot those on foot and virtual “pupils” of the eyes signal to them in a certain direction, letting them know it is all right to cross at that moment. If the Co-operative car detects a pedestrian that has not noticed them, as he has eye-sight problems or is simply being inattentive, they use a directional speaker to transmit the message.

Two lighting strips mounted in the rear window and at the top of the windscreen respectively of the S500, pulsate continuously and the pulse rate slows down when the car reduces speed. Constant rapid flashing of the lights reveal that the vehicle is about to drive on.

Intuitive and free of errors, the vehicle – Mercedes says – starts to resemble a living object.

The model with 360-degree autonomous technology was presented at the FutureInsight event, that was held in Berlin last week. 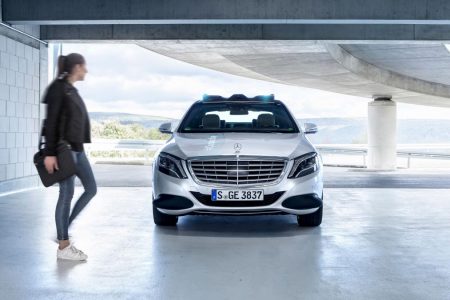