CMC Mercedes-Benz The Blue Wonder: its German name was „Das blaue Wunder”. No matter how you call it, this is a unique automobile. In September 2016, after 14 years, CMC re-issued the iconic Mercedes racing car transporter of the mid-50s in 1:18 scale.

Let’s turn back the time a bit: in 1954, Daimler-Benz was strongly involved in motorsport, with a high number of triumphs in its portofolio, even against strong opponents like Jaguar, Ferrari or Maserati. Motor racing was quite popular in Western Europe and the schedule was very tight, placing a strain on the participating teams, that had to cover hundreds, even thousands of kilometres every week, between each grand prix. By the end of the round, the racing cars were loaded onto heavy trucks and “flown” between racetracks in Germany, France, Italy, Spain, Switzerland, Belgium and Great Britain.

In 1954, the heavy-duty and medium duty trucks were not a benchmark in terms of dynamic performance, quite the opposite. The winding roads along the Alps caused serious trouble to the transporters loaded with racing cars, but the motorsport division of Mercedes-Benz got an idea: a fast transporter, able to run with the ease of a normal automobile, or even with that of a sports car, one that could cover the distance between the European racetracks and the Stuttgart-based plant in no time. 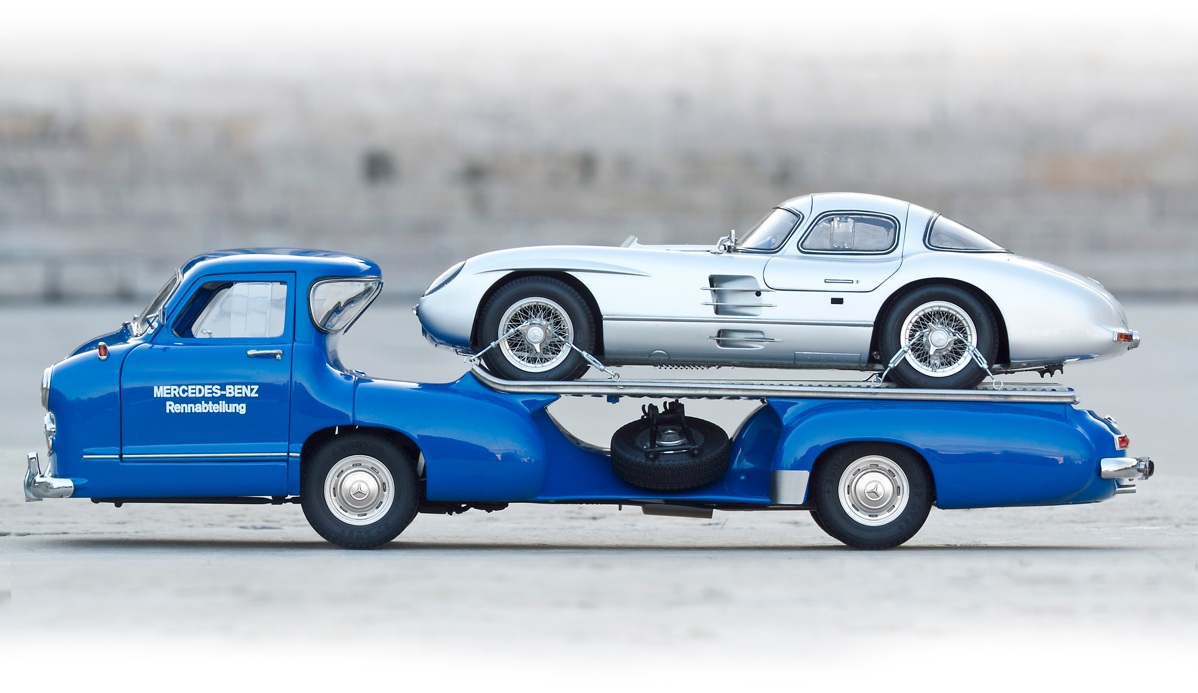 The idea got the green light and Mercedes engineers quickly combined the elements that were within their grasp: an X-type chassis from the S luxury series, an outstanding engine from the ground-braking 300 SL Gullwing, the cockpit of the W120 Ponton. And they materialized the combo into a futuristic body, painted in the preferred Mercedes brand trucks color, which was blue. The outcome? A transporter with sports car capabilities, with an almost extra-terrestrial appearance among the utility vehicles of the 50s, a genuine “Blue Wonder”. A wonder that could not transport more than a car on its open top bed and that shall stand as a unique unit, as Daimler Benz never reproduced the experiment and shall never make another copy of the prototype.

Mercedes Benz Blue Wonder contributed to the notoriety of the Mercedes sports division, that was already going through the roof due to the numerous victories on circuits. The racing success went on in 1955 as well, previewing a future domination in motor racing. Unfortunately, the Le Mans tragedy, when a 300 SLR literally flew into the stands and killed 80 people was to change the glorious run of the German brand. Daimler Benz retired from all motor racing competitions at the end of 1955 and only returned 40 years later. 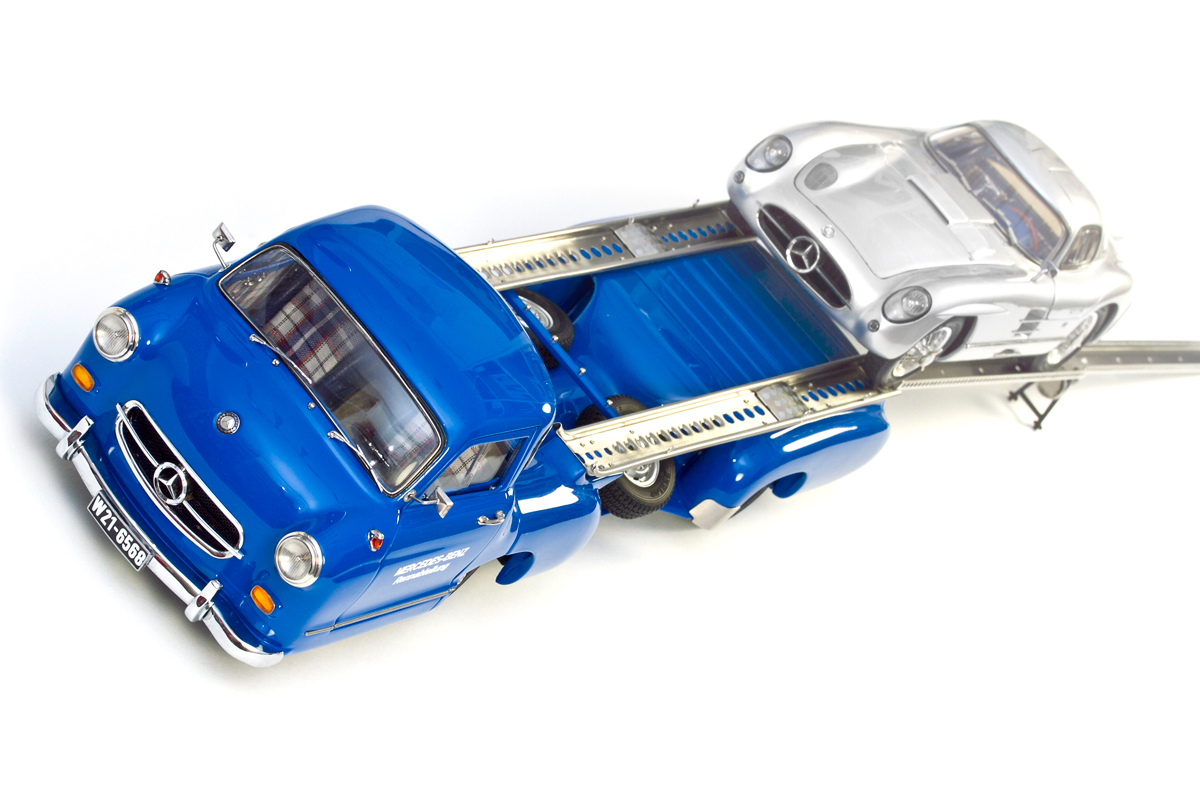 Easy to understand that the blue truck became purposeless. It was shipped to the United States, where it stayed in the custody of the Ford Museum near Detroit. Subsequently, it was shipped back to Germany and, in 1967, Rudolph Uhlenhaut, once the head of the sports division, seemed to have taken the decision to scrap it.

By the end of the 90s, Mercedes remembered the once famous Blue Wonder and created, in the absence of the original sketches, a copy based on the photos and technical data from the archives. The unit, now in the custody of the Mercedes-Benz Museum, is a living flashback to the glorious era of the Silver Arrows from the mid-1950s.

The topic, truly fascinating, challenged CMC to reproduce this transporter in 2002. The outcome was a genuine benchmark piece for the German model manufacturer. But in 2016, we have witnessed a reiteration of the model that also integrated various upgrades compared to the original edition. 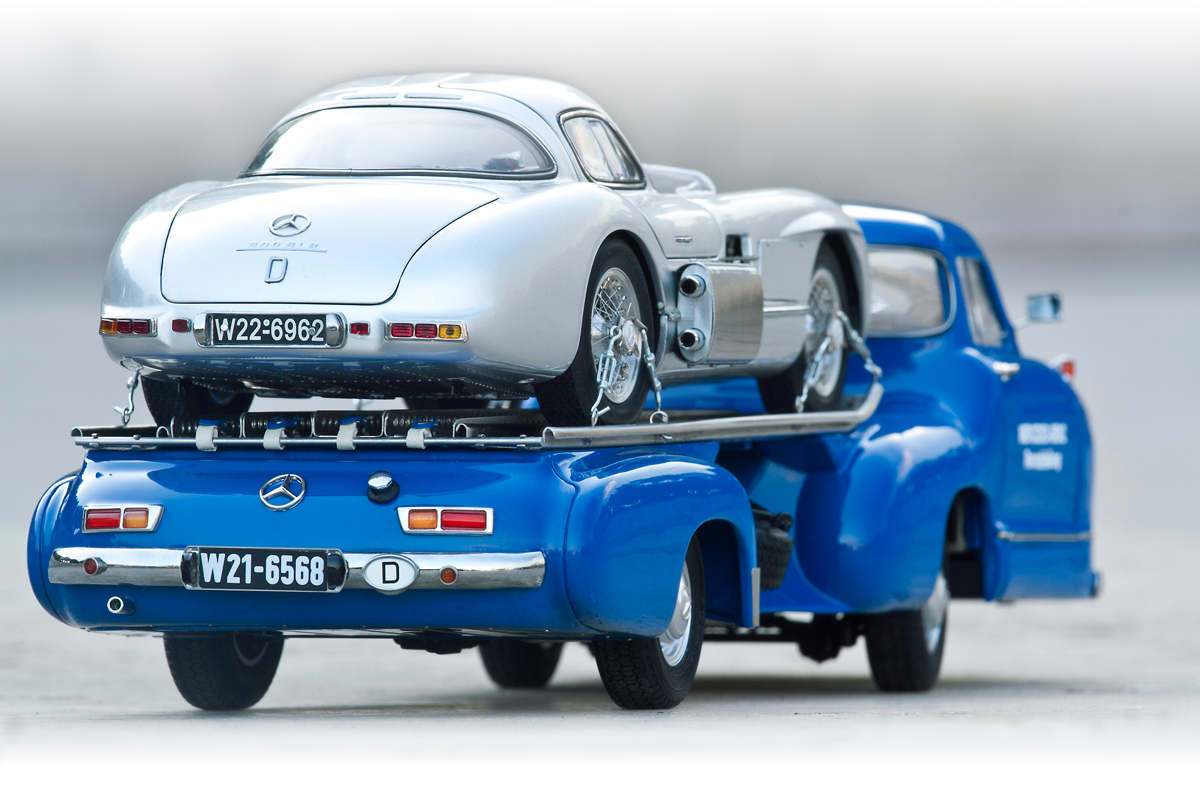 The first contact with the model hints to the exquisite nature of the project: the model is very heavy, at over 2 kilograms, with the Zamak layer being quite thick, a practice less common in the new miniatures. The paint looks sensational, the wheels and the tires equally good. The first edition was slammed for the look of the headlights, that featured visible rivets. CMC took seriously this observation on the re-issued model, giving up on the rivets not only for the headlights, but also for the rear light units.

The windshield wipers are identical with those of the first edition, as they are cast in plastic; they would have probably deserved a redesign, considering most of the new CMC models feature metallic wipers. A certain inadvertence is noticeable in mounting, as there are traces of glue in various places. The window seals are also not flawless, but overall, the level of craftsmanship is still as high as we expect it to be. 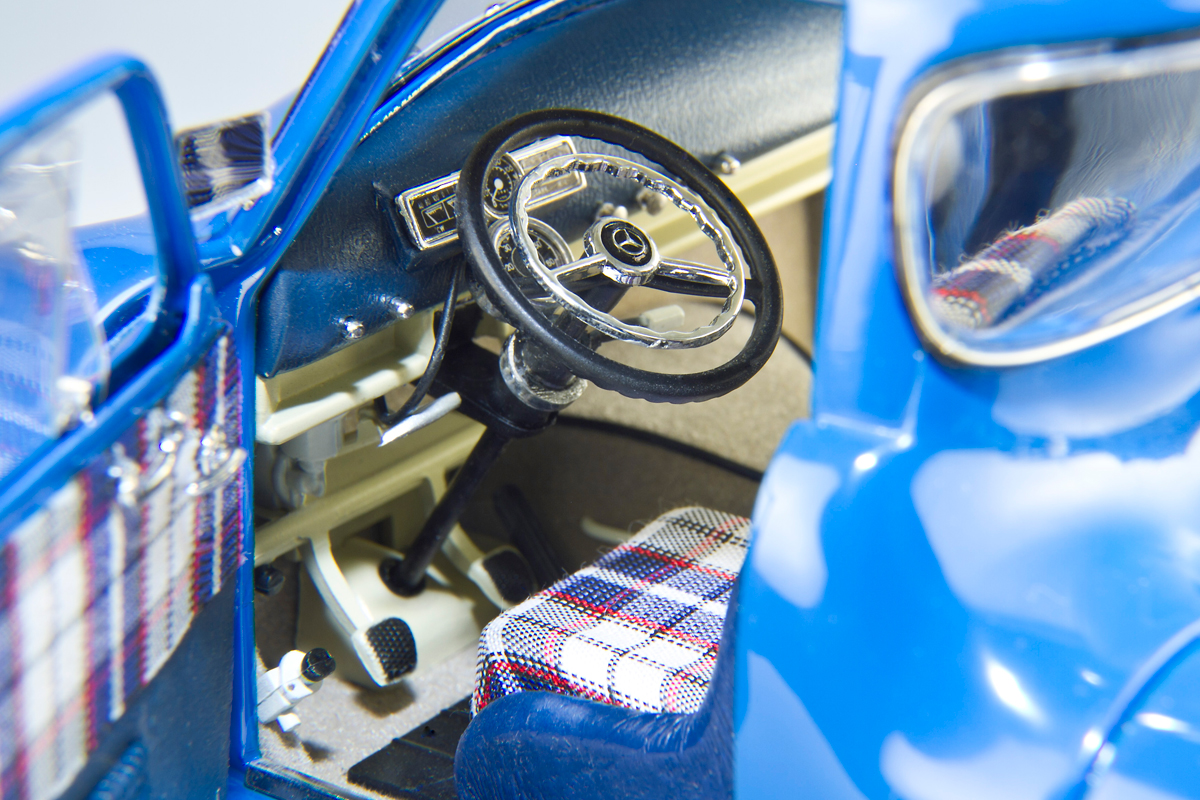 The wheels were altered compared to those fitted on the first edition. They are not blue any longer (as painted in the current unit found in the Mercedes-Benz Museum), but silver, matching the central cover. The change happened following a thorough research of the archive photographs showing the original car (photos that are exclusively in black and white).

But the real strength of the model is the loading platform system (made of aluminium), fully functional. The clamps that fasten the mobile platforms in the rear are attached to a transversal shaft via leather belts, just like in the real model. The 2 supports mounted on the spare wheels are detachable and serve for supporting the platform mobile segments. The automobile loaded on the truck is fixed on the platform by 4 metallic cables fitted with fillet adjustable hooks at each ends, once again a carbon copy of the fastening system on the real truck.

The interior, apparently unchanged from the version released 14 years ago, is very well executed. The seats are upholstered in cloth in the mid-section, while the same material adorns the doors. The whole dashboard and the sides of the seats are wrapped in blue vinyl and the floor is fully covered in mats. A detail that truly amplifies realism is the rubber edged finish given to the floor mats in the mid-section between the seats. The dashboard features legible dials and there is even an ignition key ring. Certain details give away the real age of the original project, though, such as the relatively thick steering wheel or the slightly crude mounting of the steering column.

The engine is hard to access, as it is placed behind the cab and is covered by two hoods. But this is hardly CMC’s fault and more the design of the actual 1:1 Blue Wonder. One of the hoods is fully detachable and fixed with a screw that needs a special key (present in the model box). Just after removing it, the other hood can swing up, revealing the engine compartment. There is not a big number of parts in here, but even if it were, they would be hard to spot. The inline-six cylinder 3.0-liter unit with over 170 HP was able to push the transporter to a top speed of 170 km/h, a staggering figure for such an utility vehicle even today. A BOSCH-engraved battery can be spotted behind the engine; this is the kind of detail that makes you want to have a high-class model in your collection. 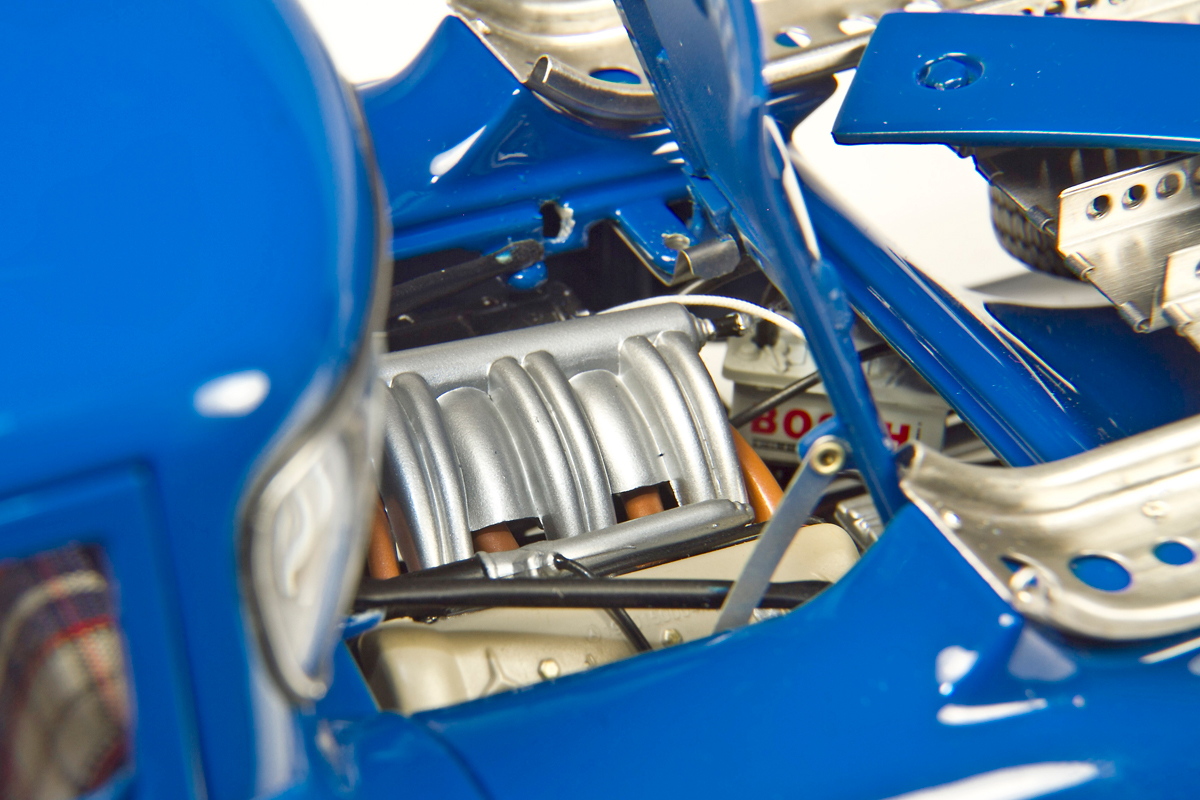 The chassis was also treated with much consideration and there are plenty of elements to be highlighted. The main X-shaped structure is a metallic one, a necessary detail considering that the model is massive and has a considerable weight. The axles are made with great attention to detail and the suspension is fully functional.

For the photo session, we selected as the precious load a Mercedes-Benz W196, but also the personal car of Rudolf Uhlenhaut, the gorgeous Mercedes-Benz 300 SLR Coupe. No matter which Silver Arrow you choose, the assembly looks fabulous. The Blue Wonder Transporter is living proof of the era in which it was created, a testimony of the bold style practice, of the Mercedes-Benz motorsport glory and of the enthusiasm that surrounded the racing phenomenon at that time. The model fully deserves a privileged spot in the enthusiasts’ collection displays.

GET YOUR OWN COPY of the wonderful 1:18 scale CMC Mercedes-Benz LO 2750 from our favorite model shop colognemodelcars.eu OR go straight to CMC’s main website and online store HERE.