CMC’s latest signature effort brings back to life the era of motor sports legends and famous vehicles alike. In June 1934 the first W 25 Silver Arrow with a supercharged engine won the International Eifel Race on the Nürburgring, marking the beginning of a series of victories that would continue until 1939. But it is the silent heroes that deserve the highest praise. Indeed, behind the success story of the Silver Arrows sat the less eye-catching, but equally significant first-ever Mercedes racing transporter. Simply known as the Lo 2750, it began its career the same year in which the Silver Arrows were introduced. 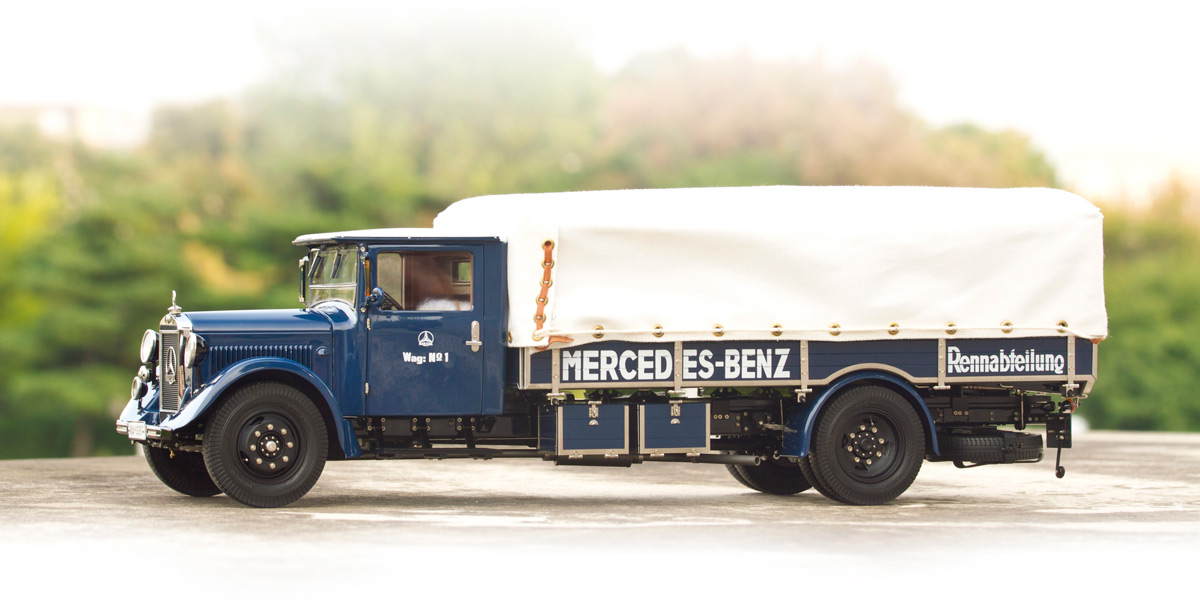 But the story of the three-pointed star trucks started much earlier, in 1926, at the Gaggenau factory, where initially only 1.5, 2.5 and 5-ton models were built. Bigger trucks with 7 or even 8.5-ton payloads did not reach the market until 1928. From 1935, Mercedes has even made its first foray into the 10-ton truck segment, but smaller trucks with a payload of 2 to 3-ton continued to represent the backbone of the line-up until World War 2. A significant innovation was the introduction of the first diesel engine for light trucks, in 1932, a feature that has quickly influenced the entire industry thanks to the exemplary efficiency and reliability. In parallel, Mercedes still offered its clients the choice of a four-cylinder gasoline engine.

Another breakthrough was the spread of low frame trucks with separate cabin and loading bed. Making it easier for cargo to be loaded or unloaded, this type of utility vehicles provided the ideal platform for Mercedes’ racing car carrier from 1934, the Lo 2750. “Lo” stood for Lastwagen Omnibusse, German words for truck and bus (reflecting the chassis ability to support both applications) and the vehicle’s number “2750” refers to its payload capacity, as the Lo 2750 was originally designated a 2.75-ton truck. Today, the Lo 2750 would be declared a 6.5-ton truck in accordance with its gross vehicle weigh, instead of keeping with its payload. The ‘civilian’ version has enjoyed great success among small and medium companies of the time, with more than 3,500 diesel Lo 2750 units leaving the Gaggenau Mercedes factory until 1936. 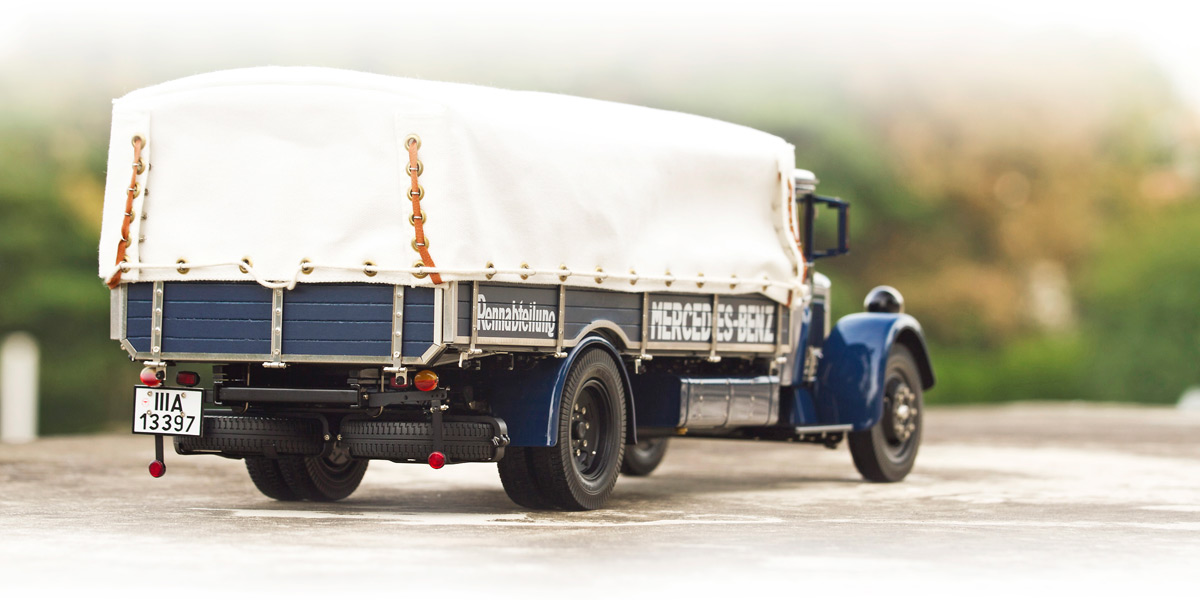 The brochure published at the time optimistically states that the vehicle posseses a “wealth of appointments”. Among other things, this meant that the instrument panel had switches for the lamps and the electric turn signal, as well as a speedometer and kilometre counter, an oil indicator display, a fuel regulator, a glow plug and start switch, and a socket for a hand-held lamp. Comfort as we would define it today cannot be found in the Lo 2750. Power came courtesy of a gnarly four-cylinder OM65 diesel engine. It developed 65 PS from a displacement of just under 5 litres. Revolutionary at the time, the cylinder housing and crankcase were cast in one block.

The racing transporter Lo 2750 had two-tone paint in blue and white, an open loading bed, arched wings, an angular cab, and a flashing chrome radiator grille with a big star proudly placed on top. Large white letters (tampon-printed on the CMC replica) on the wooden sides of the Lo 2750 spelled out the words “Mercedes-Benz Rennabteilung” (“Mercedes-Benz Racing Department”). It must have been an imposing sight when the racing car carrier drove along the motorway with its valuable cargo. The over 6-metre-long vehicle is almost two metres wide and as tall as a man. By today standards, though, the Lo 2750 is not huge. Together with its semi-trailer, the contemporary Actros race car transporter is four metres tall and 16.5 metres long. Compared to this giant, the Lo 2750 appears almost petite. A virtue replicated with matching precision by the model car itself, which doesn’t impress through the virtue of its sheer size, but the obsessive attention to craftsmanship. 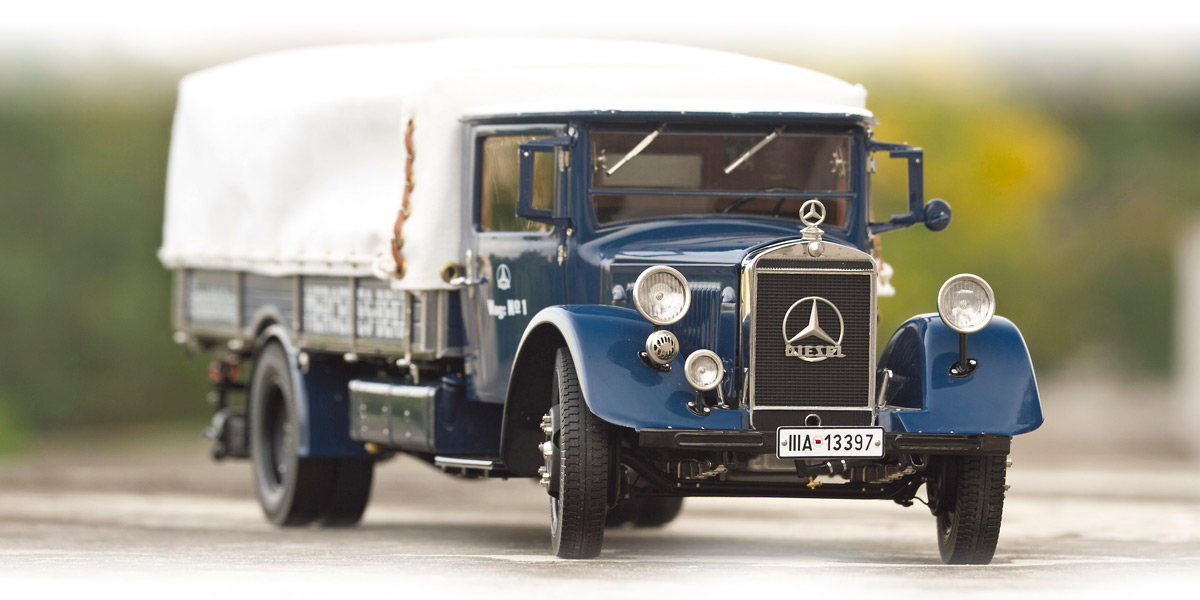 The 1:18 scale Mercedes Lo 2750 is, true to CMC’s tradition, a symphony of details and noble materials – a hand-crafted masterpiece boasting an impressive 2,365 single parts count, with 1,991 of these actually made from genuine metal. Yes, metal! In a sea of resin and composite models, it is truly refreshing to see a die-cast replica with actual depth and substance, a glorious model that simply chooses to stick to its roots and make us feel again the joy of touching real metal – the cabin, the engine bonnet, the wheels, the chassis and even the gas tank are all cast in steel. The interior of the cabin is still made from lighter zamac while plastic only adorns the smallest of details (functional direction indicator, windows, headlights glass, certain engine components – aggregates, pipes and cabling). Side boards and tailgate are made of real wood, the seats are upholstered in genuine leather. The front and rear axle are again made of metal, while the detailed undercarriage integrates a rigid steel frame.

Of course, quality has its price and the Mercedes Lo 2750 model truck is no exception, easily qualifying as one of the most expensive creations in CMC’s history. But the pursuit of perfection doesn’t come without its own inherent vices. Certain details, like the non-perforated black plastic radiator grille and the slightly unaligned headlights don’t seem to do justice to the CMC heritage. Another oversight concerns the metal furnishings of the side boards and tailgate, which in the model are exposed, but in the real car were painted blue, just like the rest of the wooden bed. True-to-the-original factor aside, we must say the metal frames actually give the model a more authentic feel, increasing the chromatic contrast. After all is said and done, we feel obliged to point in CMC’s defence that the truck pictured in our review is a pre-sample unit, so little foibles such as these might be corrected in series production. The side-boards and tailgate can be folded down, of course, exposing the exquisite levels of craftsmanship invested in the model. Tens of microscopic metal screws surround the wood and chrome components, while the hinges are again cast in true metal. 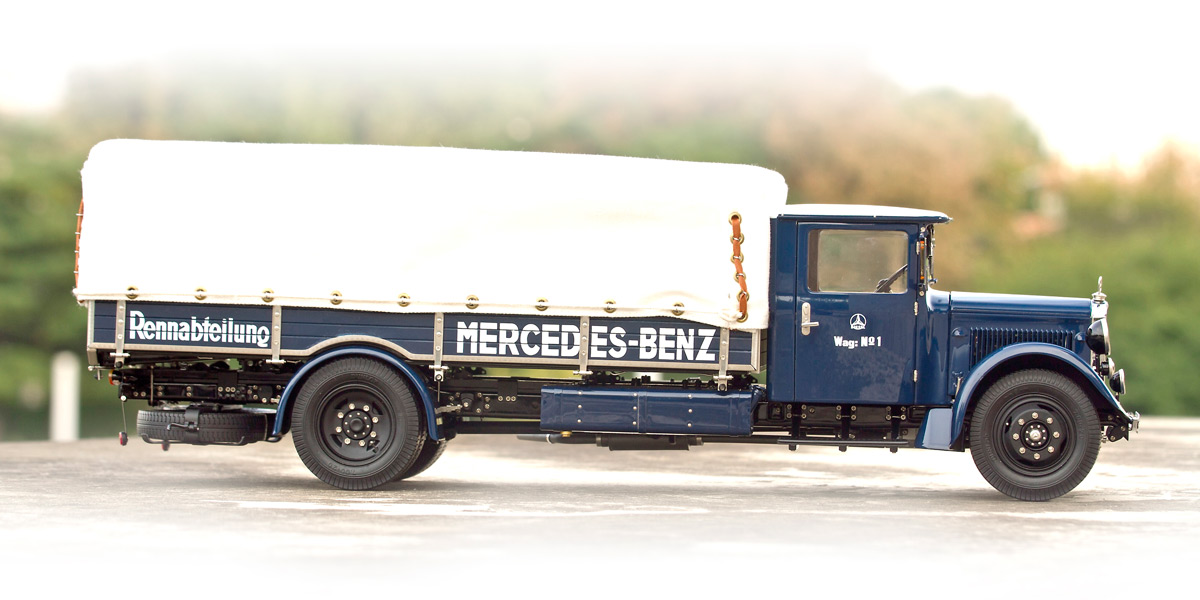 The side-view is breathtaking, other tens of tiny screws popping their shiny heads from the chassis itself, firmly securing the bulk of accessories attached to the truck’s frame – the gas tank with a functional filler neck cap, the two openable tool boxes, the steps next to the cabin doors, the arched wings or the two detachable spare wheels underneath the loading bed in the rear – a classic CMC touch. The sheer number and the actual purpose of the exposed screws cement the premium feel of the model, a detail that seems to take its inspiration from the world of fine jewelry and hand-crafted Swiss watches. Last but not the least, the three-pointed star and oversized Diesel inscription mounted on the radiator grille are two separate photo-etched pieces and the hand-crafted stainless-steel cooler comes with a Mercedes-Star filler cap that can be unscrewed – again, a familiar detail to CMC aficionados.

With such a wealth of exterior detailing, the interior seems almost sparse. It is not CMC’s fault, but a concession made by the pre-WW2 era trucks on the altar of efficiency. Form follows function. Everything is, in fact, well reproduced and a few neat touches do manage to save the day: the movable hand-brake lever and the foldable bench cushion (covered in leather) which covers the battery. Another eccentric detail is the hinged windscreen, which can be partially opened by pulling the bottom side – caution needed, as the wipers could break if too much force is applied in the wrong area. The engine follows the same recipe. Simple design eclipses the potential complexity of the scale interpretation. CMC beautifully replicated all the aggregates, pipes and cabling, but the number of actual components is not high, in line with the basic nature of the actual four-cylinder engine hiding beneath the bonnet of the real Lo 2750 truck. The fully detachable engine cover is made from three distinct metallic parts. The spring loaded locking hooks work faultlessly and their relatively generous dimensions make their operation swifter than in the case of smaller cars and models, like the Bugatti Atlantic or Corsica. 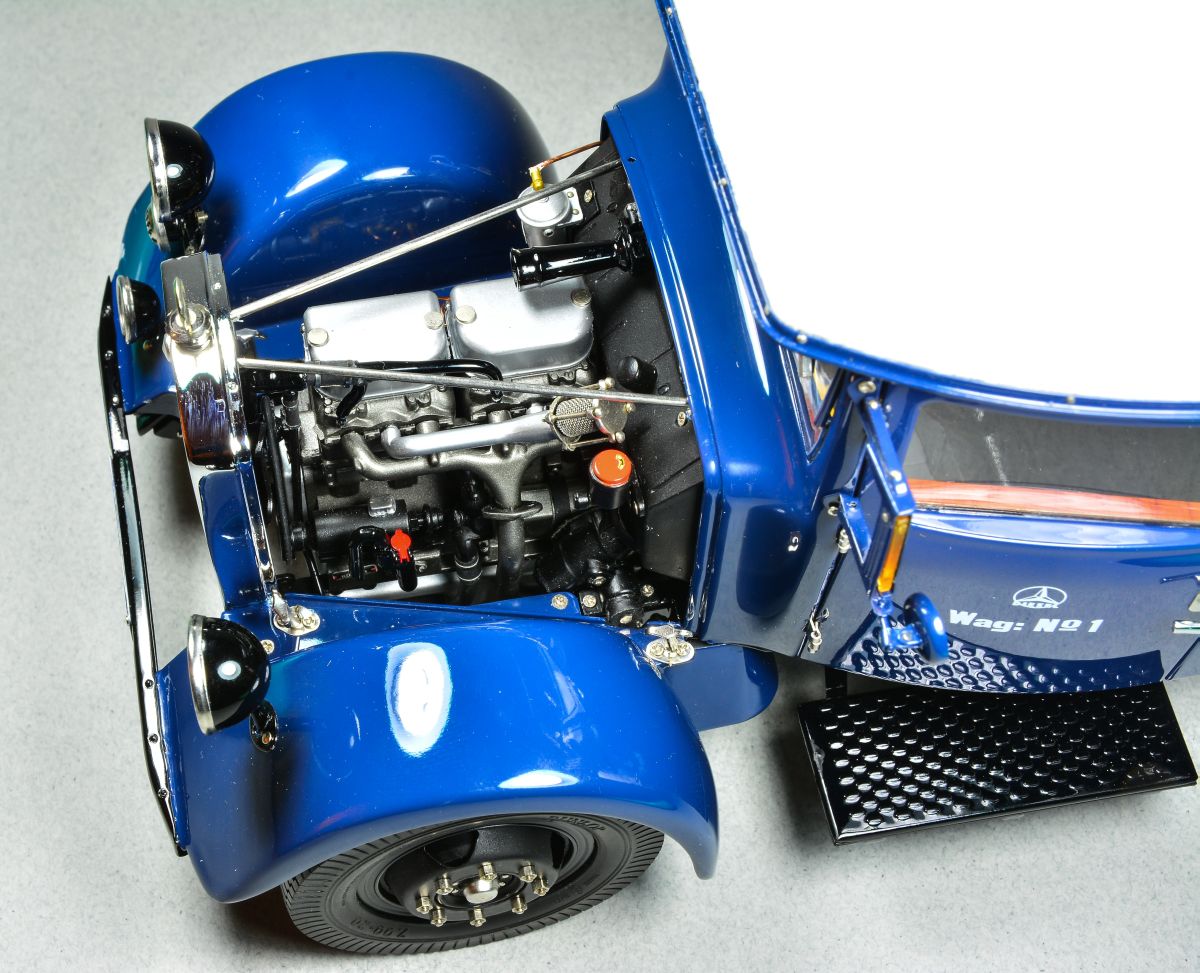 Rounding off the detailing tour-de-force is the (true-to-reality) complex network of wires, brass eyelets and leather straps, securing the tarpaulin. Once the cloth cover is folded, a whole new universe of precision detailing emerges. The inside framework is again metallic and comes with individual wood-plank supports for the tarpaulin, mounted on the top. For easier loading, the bed of the Mercedes-Benz Lo2750 race car transporter has been lowered further below the level of the rear wheel arches, a detail faithfully reproduced by CMC too. This is why the loading bed, constructed to transport every type of the CMC-Mercedes pre-war-Silver-Arrow models, includes not one, but two pairs of detachable loading ramps and affixed rails, which join to form a small bridge, closely following the shape of the arches below. When not in use, the rails can be conveniently stored in the middle section of the rear bed. Needless to say, they are cast in metal. Loading period correct racing cars into the bed is a quick and trouble-free operation and CMC had the inspiration to include into the retail package four wheel stoppers to keep the loaded car in place and four cable ropes with adjustable turnbuckles to fasten the loaded car. Again, a nice touch, worthy of the CMC pedigree. Unfortunately, we only had a Bentley Blower at our disposal. It’s a sacrilege, we know, but a scheduling conflict sent the Silver Arrows to the very stage where they wrote history: the racing track. 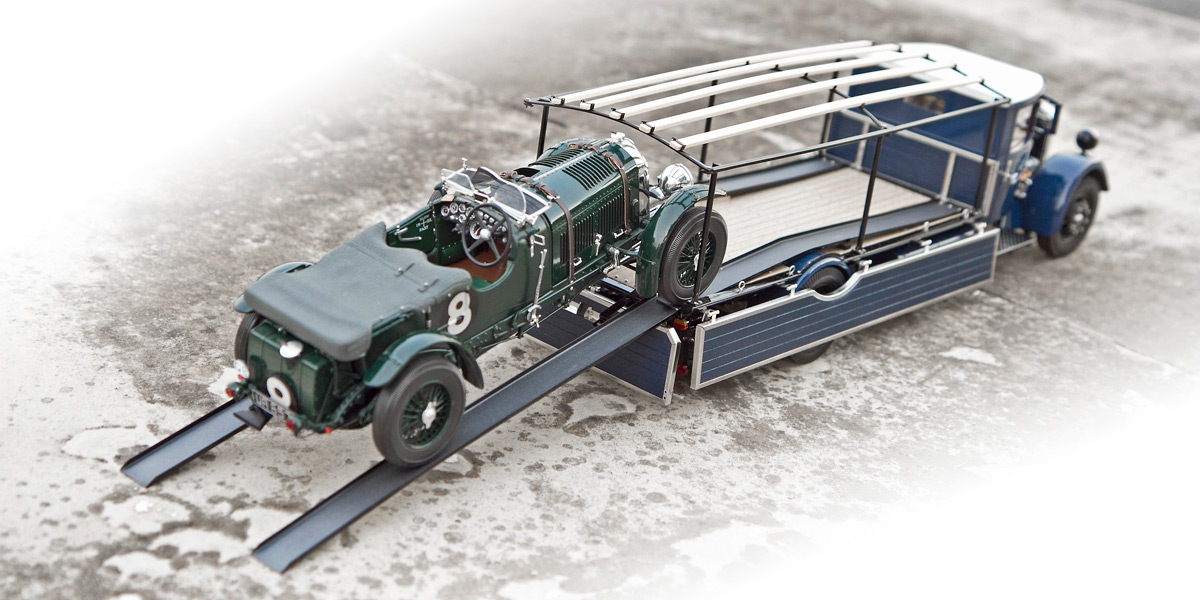 True to CMC’s tradition of delivering the very best masterpiece reproductions of motoring legends, the Mercedes-Benz Lo 2750 1:18 model car exactly matches the historical racing transporters. The German company’s efforts are backed by what is simply the very epitome of peerless craftsmanship and detailing – with pricing to match. Indeed, the star on the radiator grille can shine as proudly as though the truck had actually accompanied the historic victories of Rudolf Caracciola, Manfred von Brauchitsch, Hermann Lang and Luigi Fagioli.

GET YOUR OWN COPY of the wonderful 1:18 scale CMC Mercedes-Benz LO 2750 from our favorite model shop colognemodelcars.eu OR go straight to CMC’s main website and online store HERE.