Mercedes has imprinted a substantial facelift to both CLS Coupe and CLS Shooting Brake, even if the Shooting Brake had been launched less than two years before. Mercedes introduces a new smaller diesel engine and a new V6 turbo petrol, new online services, new 9G-Tronic gearbox and an innovative lighting system.

Launched back in 2004, the CLS sets up a new class similar to elegance and lifestyle. The idea was copied by the competiton few years later and we mention here only the BMW 6 Series Grand Coupe, Audi A7 Sportback (with a different design layout), Porsche Panamera and Aston Martin Rapide. But the original gave the lead and CLS was a huge success. In 2010, there followed the second generation and two years later, Mercedes revived an old concept of a Shooting Brake. Even though the Shooting Brake version was hardly launched in October 2012, Mercedes decides to facelift both versions – the CLS coupe and the CLS Shooting Brake – at the same time. With such an elegant profile, the designers’ work was pretty much complicated and Mercedes does not operate too many changes on the outside. But we have to mention the new expressive diamond radiator grille in black with one louvre and the redesigned front bumper with large air intakes plus the integration of the daylights which were unaesthetic in the past, with their low position in the area of the air intakes into the headlamps. To the rear, both versions feature the new darkened LED tail lights with adaptive light intensity. LED High Performance System is standard for both version meanwhile the new Multibeam LED headlamps are offered as an option. Also, Mercedes provides an extended range of alloy wheels from 17 to 19 inches and two new metallic colours: Citrine Brown and Magnetite Black.

CLS Shooting Brake continues to give the same unique combination of a practical and emotional car with a boot volume of 590 litres, which can be extended up to 1,550 litres by folding the rear backrests by two practical levers placed in the boot. The electrical control of the tailgate comes standard, as is the rollo covering the boot automatically retracts at a simple touch. 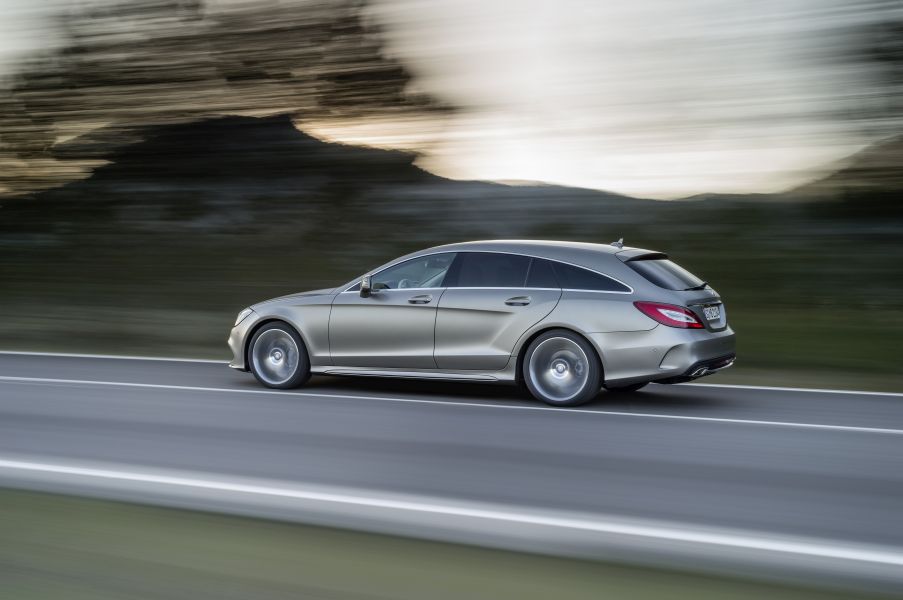 Comparing to the exterior, Mercedes made more changes to the interior. Instead of the 7-inch indashboard display, Mercedes presents a new and more modern free-standing 8 inch colour display, which is available not only for the Comand Online multimedia system, but also for the base system Audio 20 CD. Both Audio 20 CD and Comand Online could connect to the internet via a Bluetooth enabled mobile phone. Together with the Comand online, Mercedes has many applications to offer and one can surf the internet with no restrictions, when the vehicle is stationary. The CLS comes to Europe with a service package known as “Mercedes connect me”. This package includes accident, maintenance and breakdown management. 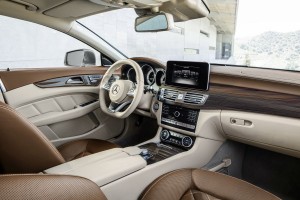 The layout of the instrument cluster, with three round dials, was preserved, but the multifunctional steering wheel with three spokes and perforated grip area is brandnew and are all dressed in black or Espresso Brown Nappa leather as standard.

The AMG Line package provides access to the multifunction sports steering wheel with flattened bottom section. Another significant change refers to the new ergonomics of the Comand system, which now has four buttons around the controller instead of two, like in the past. The new AMG Line Plus and Night Package are added to the already existing Exterior Sports package and AMG Line.

If the 4Matic 4wd was offered only to CLS 350 BlueTec and CLS 500 in the past, now the 4Matic is available for the CLS 250 CDI and also for the CLS 400. Like in the E-Class family, when it came to a facelift, Mercedes introduces the new 9G-Tronic gearbox, the world’s first nine-speed automatic transmission with hydrodynamic torque converter.

The gearbox, produced in Stuttgart and, starting 2016, also in the romanian city of Sebes, is part of the standard equipment for the CLS 220 BlueTec, the CLS 250 BlueTec, the CLS 350 BlueTec and the CLS 500, meanwhile 7G-Tronic Plus is installed in the CLS 400 and the 4Matic models. Comparing with the 7G-Tronic Plus, the 9G-Tronic offers a torque converter with reduced side slip, an ECO mode with improved gear spread and could be combined with a Start&Stop system. Mercedes promises a better efficiency for the new gearbox because a broad ratio spread of 9.15 between the first and the ninth gear. Thus, at 120 km/h, the engine speed is only 1350 rpm.

The new gearbox is as compact as 7G-Tronic and is lighter, despite two additional gears and can transfer up to 1000 Nm. Three modes are available – Eco mode, Sport and Manual – plus an automatic mode named “Short-term M” like in the existing 7G-Tronic Plus. This mode is activated during Eco or Sport Mode, if the driver engages the required gear, using the shift paddles.

The CLS Coupe comes standard with classic steel springs and a Direct Control suspension, as the standard version is on sale in two variants: Comfort or Sports suspension, the former comes with the AMG Line and Exterior Sports package. CLS Shooting Brake uses the air suspension at the rear with self leveling similar to that used in E-Class T-Model. You can optionally order the Airmatic suspension, which comes standard for the CLS 500.

All modern assistance systems launched with the S and C-Class are available, standard or optional, for the CLS-Class. Attention Asssist, Pre-Safe and Colission Prevention Asssist Plus are standard, meanwhile Distronic Plus, BAS PLUS with Cross Traffic Asssist, Active Blind Spot Assist, Active Lane Keeping Assist and Pre-safe Plus are included in the options list.