The time has come for the annual meeting of the exclusive Mercedes-Benz 300 SL Club e.V. This year, the lucky owners of the 300 SL Gullwing and Roadster models met in Stuttgart. For the very first time, the classics were allowed to spend one day at the test track of the Mercedes-Benz Untertürkheim plant.

Developed from the 300 SL racing cars, the W 198 model series was built from 1954 to 1963 in small numbers compared to today’s figures. Only 1400 gullwing models saw the light of day between August 1954 and May 1957, including 29 with a light-alloy body. The 300 SL Roadster entered series production in February 1957, all the way to February 1963. 1858 units of this model were produced, including roadsters with a coupé hardtop. The exclusive 300 SL Club currently has about 300 members worldwide. 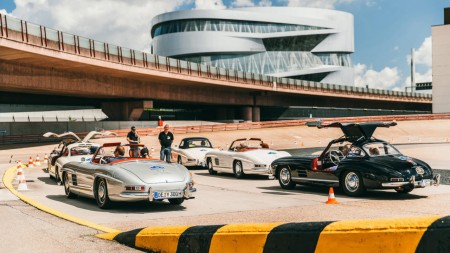 60 years ago, the gull-wing model was replaced by the roadster with two conventional side doors. The gull-wing doors of the coupé had been a design necessity to ensure a stable vehicle frame, no more needed for the roadster. Both the coupé and the roadster were models which were hand-crafted individually at the Mercedes-Benz factory in Sindelfingen.

The 60th anniversary of the roadster was the chance for the club and the Mercedes-Benz club management to reunite in a special venue for this year’s meeting: Stuttgart, the Mercedes-Benz Museum and the test track of the Untertürkheim plant. The cars also road-tripped to the nearby regions of the Swabian Jura and Swabian Forest. Festive evening events were also on the agenda. 87 300 SL models came to join the 2017 club meeting. This year, there was quite a special guest. Prof. Dr. Thomas Weber joined the ranks of the 300 SL Club. Weber was the man responsible for corporate research and the development of Mercedes-Benz Cars at Daimler AG and a member of the Board of Management starting 2004 to the end of 2016. As a participant at the Mille Miglia classic rally in Italy, he fell in love with the 300 SL. 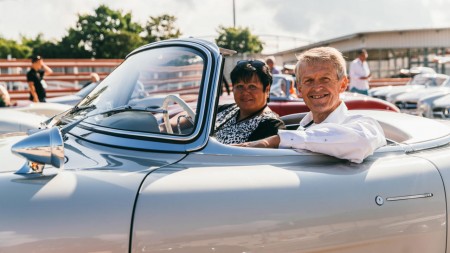 “It is the icon of the Mercedes-Benz brand. I am full of admiration for Rudolf Uhlenhaut, who developed the 300 SL in the 1950s. The car was many years ahead of its time and the competition. Even today the 300 SL is modern”, says Dr. Weber.