What is the best choice for a youngtimer sport car ? Mercedes SL R230 (2001-2011) or the Porsche 911 996 (1997-2004)? The answer to this question is a dilemma for car enthusiasts for generations. Auto motor und sport Magazine has conducted a comparative test and is trying to give an answer.

The test carried out by the German magazine auto motor und sport puts face to face Mercedes SL R230 and Porsche 911 996 which can be found  at prices of about 15000 euros and 20,000 euros respectively. These cars are relatively young if we look to the production year and their myth shines almost as brightly as that of their illustrious predecessors. Their design is fascinating and the power of 300 HP is respectable even today.

But on the other hand the lower price has its explanations. Connoisseurs are bothered by the not-so-classic Porsche 911 design and the fried egg shape of the headlights (personally is the only Porsche 911 I don’t like) as well as the interior too close to Boxster. And in the case of SL, connoisseurs do not like the four-eyed face or the fluid forms close to those of SLK. And weren’t there any problems with the 911’s first water-cooled engine? 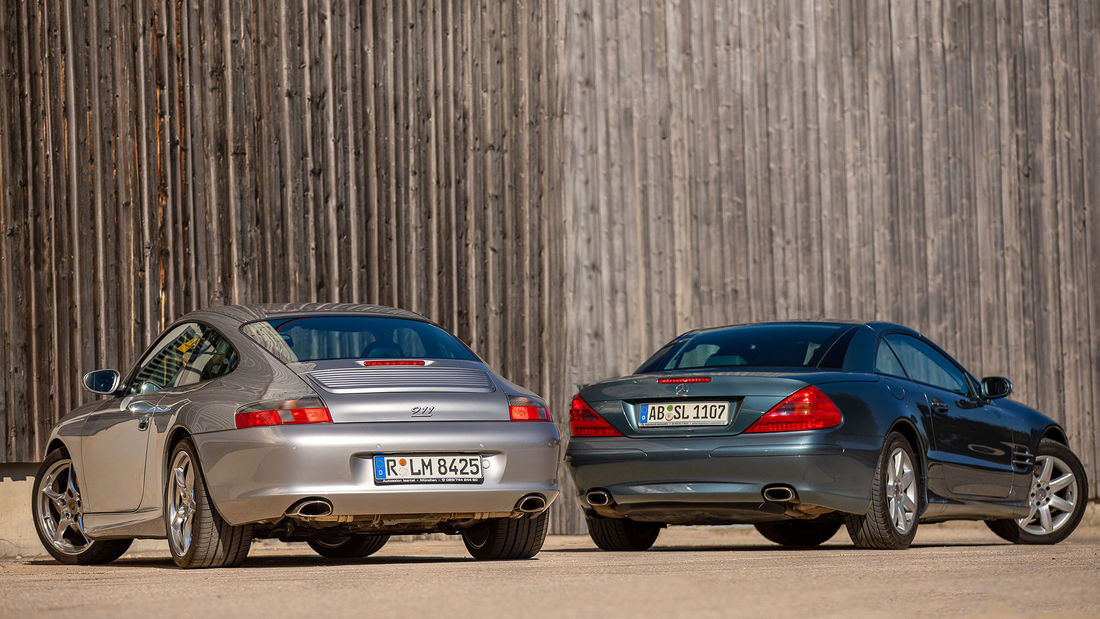 Mercedes SL is painted in the special color Blue Topaz, the interior is covered in blue leather and has 71654 km on board. The air intakes on the wings are reminiscent of the 300 SL with butterfly doors and are not only a design feature but also have a functional role. The feather shape contributes to a very good CX of 0.29 while the rear part is reminiscent of the Mercedes SLK R170. However, the then designer Peter Pffeifer managed to design a special aura according to SL’s standards.

As for the Porsche 911, the design looks more unified than the Mercedes SL and only the short wheelbase does not match this successful creation of Harm Lagaay. It perfectly simulates a moving fluid body even though the Cx is only 0.30. This 911 is a special one being one of the 1963 copies of the limited series “40 years 911” produced in 2004. It is also distinguished by the 18-inch polished rims and the silver paint Carrera GT.

This explains the relatively high price of 59,900 euros because in addition to exclusivity, the car is in perfect condition and only displays 32042 km on the LCD screen on board. And the five intertwined dials that now include a water temperature indicator are superb.

The author considers that water cooling is not only an advantage for sound insulation and emissions but also for power. Thus, power increased from 272 to 300 HP/6800 rpm while the displacement was reduced from 3.6 to 3.4 liters. At the facelift in 2002 the displacement returned to 3.6 liters and the power increased to 320 HP, while the limited series “40 years 911” has 345 HP.

The water-cooled engine of the Porsche 911 did not have the mechanical fragility of the air-cooled one because the Porsche engineers did not skimp on the camshafts and valves and introduced the direct actuation of the valve by bucket tappets.

The number of valves is not so important for Mercedes SL R230 which draws its power from the larger displacement. Until the 2006 facelift, the M113 V8 engine had only two camshafts, 16 valves and two spark plugs per cylinder. After the facelift, the 5.5-liter M273 V8 engine develops 388 HP.

The author is amazed at how close 911 and SL came together: there is no longer a duel between a driver car and a comfortable convertible. Both models are like two sophisticated comfort saloon and if the Porsche 911 would have the tiptronic automatic transmission that was not available in the limited series ’40 years 911′, they would be even closer because the SL gained significantly in terms of driving dynamics due to multlink rear axle and new rack and pinion steering.

And on the other hand, the Porsche 911 gained a lot in terms of comfort because the multilink rear axle and power steering tempered its sudden oversteer reaction. In these conditions, 911 does not need all-wheel drive, which also brings an excess of weight.

Mercedes impresses with the comfort and nonchalance with which it delivers power. By comparison, a 911 convertible is almost twice as expensive compared with the coupe version. The 911 fascinates with its engine sound, maneuverability, gearbox accuracy and the way it delivers power while the SL lacks the typical sound of a V8.

Both are excellent cruise cars but Mercedes offers a feeling of space and road comfort superior to Porsche. Instead, Porsche attracts the buyer with the key located to the left of the steering wheel, it is more incisive and more spontaneous than Mercedes. But the dream of driving outdoors can be fulfilled at Mercedes for a much smaller amount.
In SL you feel like in a glider, you can drive very relaxed and always feel the power of the V8 under the pedal. But switching to 911 is fatal because it challenges you, it’s more brutal and pure passion makes its way.