Perfection is always relative. Just as beauty and love. Particularly clever people have even written theories about relativity and its effect on our daily lives. And they seem to have a valid point. Both the Audi S8 and the Mercedes-AMG S 63 4Matic are indeed somewhat… relative to their specific goals, to their sporty ambitions, their size, their weight and even their starting price. The sum of all these traits however is simply impressive.

Don’t ever let other people question the sportiness and sheer presence of the two super-limos, though. Don’t ever call them fat. You never know when two hairy-chested mafiosi might be listening. And they get easily offended by bad word mouth targeting their favorite cars. Unless you’d like to visit the underground parking garage of a betting house. 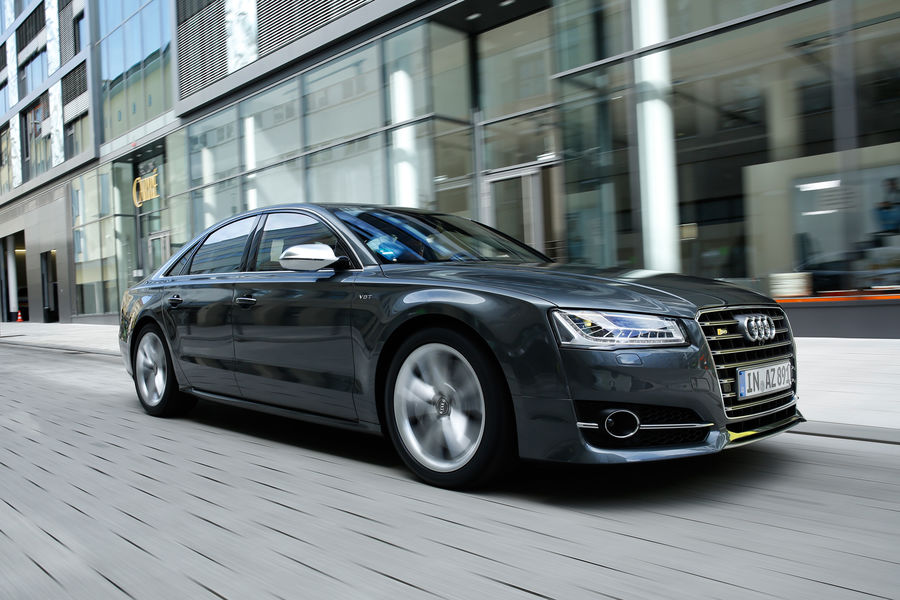 In fact, we’d disagree too. Just look at the S8. It’s such a thing of beauty. And as soon as you put some miles behind you in its company all the nuances suddenly make sense. This a species of cars most easily to associate with the notion of physiotherapy on wheels, everything is there to make the occupants happy, from the serenely comfy seats with massage function, to the so-called noise cancellation system which eliminates negative engine vibrations – successfully concealing the cylinder deactivation reverberations in the process. 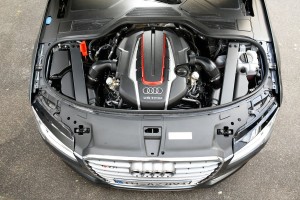 Time to look at the real reason we’re analyzing these uber-limos in the first place. Engines. Big engines. Twin-turbo V8s, in particular. The Audi S8 is hiding under its long bonnet a 520 HP 4-liter unit coupled to an 8-speed automatic gearbox and shared with its smaller RS6 sibling. The strong torque of 650 Nm makes sure the S8 flies effortlessly despite its 2,071 kilos, sports exhaust system burbling in the back, all this while the power flow seems to kick you in the back of your head like a hammer every time you floor the throttle. And this goes on and on until, at 250 km/h, the S8 finally succumbs at the will of the limiter. 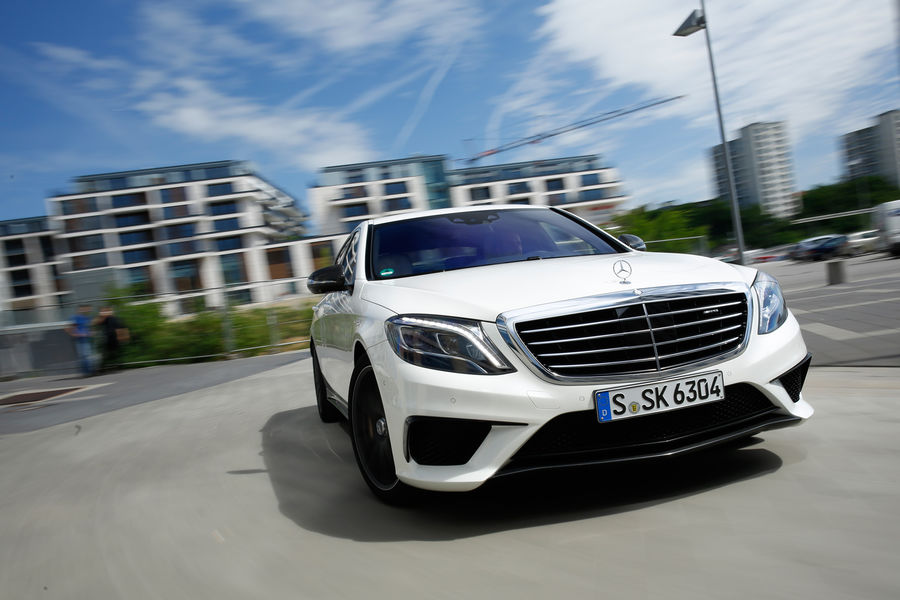 Unbelievable as it might seem, the Mercedes takes you even further, subduing its size more aptly than the S8. The ludicrous 900 Nm on tap certainly help, an advantage the Mercedes-AMG S 63 4Matic is not really coy about. Instead, the mighty Benz makes its statement clear right from the outset with its delicious but menacing growl. Contrary to Swabian tradition, the noise penetrates a whole lot more than you’d expect into the interior, gracing the driver’s ears with the aggressive notes of the 5,5-liter V8 lurking above the front wheels. 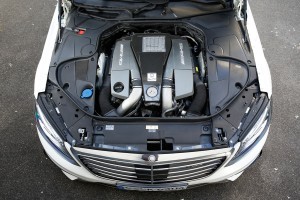 Do not misunderstand us. The Mercedes-AMG S 63 has not shed its luxury legacy turning into a thorough bred sports car all of a sudden. On the contrary. But what it does best is being that little more sporty and straight forward than its four-ringed rival, taking its dynamic nature more seriously than any of its ancestors. This is probably more evident in the chassis itself, leaving behind traction issues of old thanks to the 4Matic system. The S 63 finally aptly sends all the torque to the ground via its 20inch wheels and blistering fast seven-speed torque converter automatic transmission. Power and torque floundered until well into the second gear under the strong hand of the ESP. Now, with the optional all-wheel drive (only on the long wheelbase model), both are history. 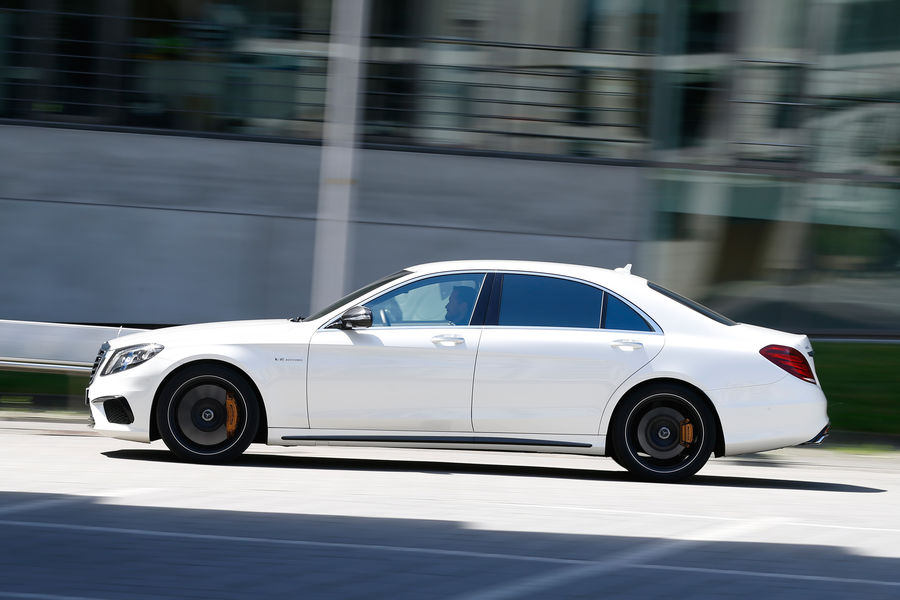 The corollary is a weight penalty of 90 kilos compared to the 14 centimeters shorter Audi S8, a handicap the 585 hp easily camouflages. In return, the Audi does manage to cut a tenth of a second from the sprint to 100 km/h, though, not of great relevance to the overall scoring board.

That being said, there are a few chapters which make the S-Class more difficult to master than the S8. The cockpit takes center stage here. It’s easy to get lost in there and we’re not talking about the vast space on offer. The driver easily gets lost in the operating logic behind all the electronic gizmos and their sheer number. Take this into consideration: the color of the ambient light can be changed at the click of a button, there are not one but two huge LCDs in plain sight, one more adamant to wow you with its array of vital data on display, there’s an interior perfume dispenser, endless seat settings and even more multimedia options… much of it probably never meant to be discovered in the first place. Regardless of how many menus remain hidden, the feeling the S-Class’ interior exudes is plain special. And the shinning star visible on the hood is a nod to Mercedes tradition. 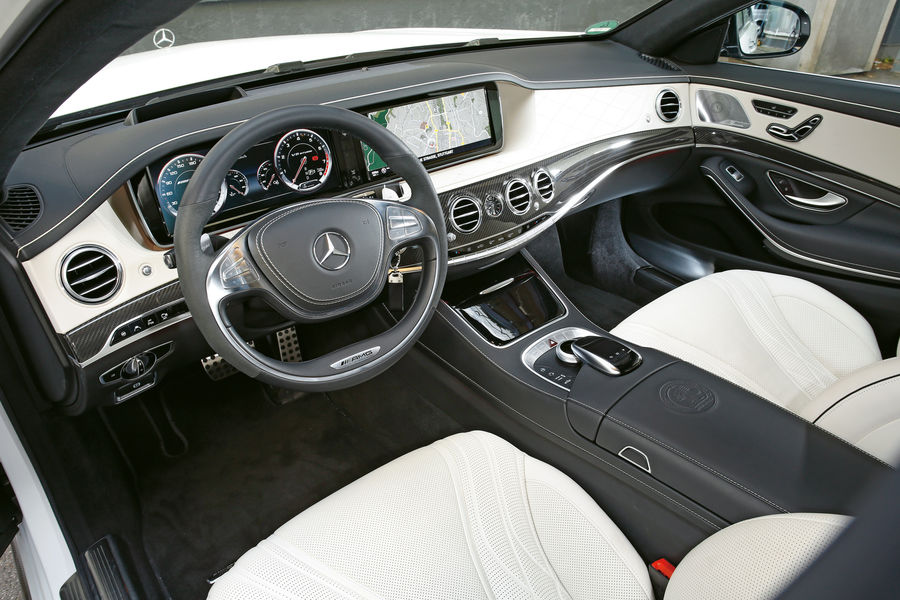 That’s until the mighty Mercedes reaches the small track in Hockenheim, a moment which has less to do with tradition than with pure madness. Put this into perspective. The Mercedes-AMG S 63 4Matic completed the ‘race’ in 1.15,5 min, throwing all its five meters head first in corners and beating a Lotus Elise S Clubracer in the process. Neutral, unsettled and despite the long wheelbase very quick. The north curve, for example, has been tackled at 121 km/h. Just to understand: a BMW M4 manages to fly past it with only four kilometers per hour more. 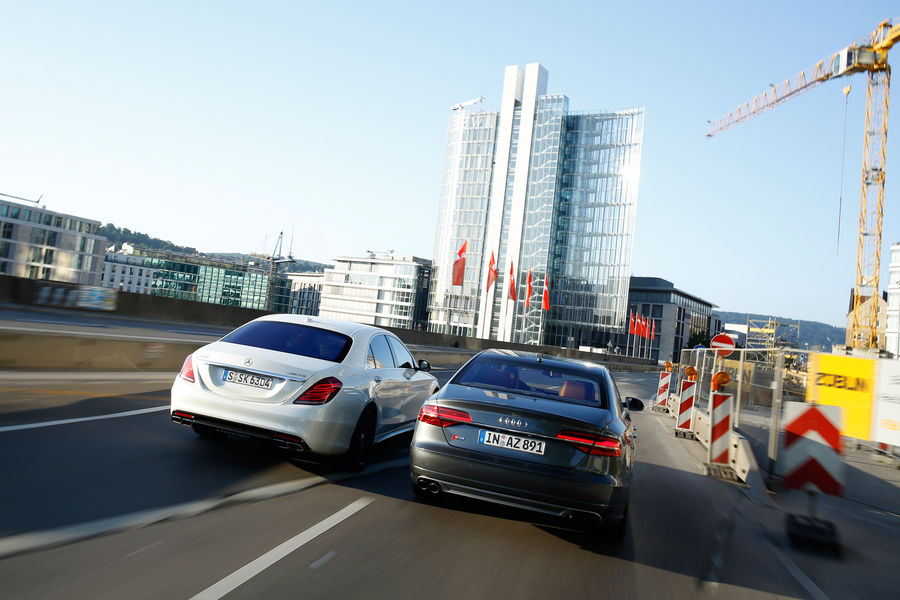 Not even the S8 can catch the mighty Merc. The Audi quietly yields to AMG’s brilliance, completing the Hockenheim run not as brilliantly as the S 63, at eight-tenths behind. Turning, however, is another story. The sport differential indeed feels as it takes its guardian angel role seriously, helping the front axle gain the necessary grip to counter the tail happy effect, a feeling honed to strong belief by the wonderfully (and unexpectedly communicating) steering. It’s finally time to turn the tables on the price chapter – 40,000 euros is the difference asked by Mercedes. Too much, too… relative to the empiric performance advantage.