The joint venture between AMG and the boats manufacturer Cigarette reached a whole new level, as it comprises of a whole model series, corresponding to the performances of the automobiles produced by Mercedes-Benz AMG.

Cigarette targets those who wish for uncompromising performance on water, just like Mercedes-Benz AMG targets those who wish to be the fastest on roads. These were the premises from which a joint operation of the two manufacturers started ever since 2010. Technology is making progress and both companies are looking straight into the future. Their alliance reached a whole new level by launching the Cigarette AMG Electric Drive, a powerboat for which the AMG development team worked for the first time, to adjust the SLS Electric Drive propulsion systems to the boat building industry, getting the strongest electrically driven motor boat.

Based on the already proven structure of the 38 Top Gun model, the new model is intending to offer a future-oriented alternative of the powerboats, to the devotees. With a 11,6 meter length and a 2,6 meter width, the Top Gun is highly known as one of the most capable boats ever built by Cigarette Racing.

Visually, the two vehicles resemble especially when it comes to the “AMG electricbeam magno” matte paintwork, which can exclusively be seen in these two situations, but also to some other typical design components.

Similar to the internal combustion engined watercrafts, the powerboat has two symmetrically mounted drive units at the rear, to the side ends. Each of the two drive trains features 6 synchronized electrical engines, delivering 185 HP and a 250 Nm torque each. Therefore, the powerboat provides a 2.200 HP maximum power and a 3.000 Nm torque. The electrical transmission system was especially conceived to fit in high performance vehicles. The 12 electrical engines and the two transmissions were placed as backwards as possible and extremely downwards to the boat. It happened the same with the high-voltage batteries. This brings the advantage of a low center of gravity and balanced weight distribution, which favors higher handling characteristics despite the higher weight apart from the combustion-driven model. 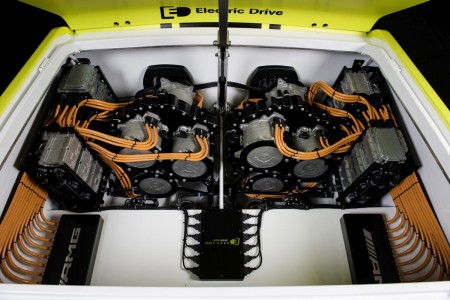 The typical minimalist, but aggressive AMG style and the emerging performance were implemented in a wide range of Cigarette watercrafts. A model standing out of the crowd is the recently launched 42 Huntress, desiring to be a navigational anology to the Mercedes-Benz G 63 AMG inland monster. The boat has been conceived as a recreation watercraft. The race-inspired hull enables reaching stunning speed, while the interior is spacious and bright. It is the first powerboat to be certified for featuring five Mercury outboard motors. Available in two versions of four or five Mercury 300 Verados outboard motors or Mercury Racing 350 Verados, the powerboat provides a power you can always count on. The sharp V-shaped 2-stage hull makes the powerboat to smoothly float on water, while the light structure, made of composite material, was upgraded to lower the center of gravity. All these innovations were made for the powerboat to be easily handled.

The new Cigarette model features, apart from others, a 2,2 meter width for the lower deck, which provides an excellent freedom of movement. All elements have been made for the powerboat to make part of a high class. One can access the boat by a retractable ladder and the the all-round step configuration gives the impression of a big yacht. The new drive post provides excellent visibility, as the high structure is made by an aluminium-based alloy composite. All the design components of the Huntress watercraft have been mixed together to create a boat combining speed, technology and gallant looks. Just like the Mercedes G 63 AMG on the road. The control console and the helm were ergonomically and comfortably conceived and the sofas behind it can be jointed and folded by a hydraulic system, to shape the sunbathing area.

The dashboard is a high-end one, with matte aluminium polish and all controls intuitively grouped. It can be equipped with three 15” GPS Garmin displays and with four Garmin Digital Marine Instrument Displays, used to provide data regarding the engines run.

Huntress is an imposing physique, large witdh watercraft, the new deck, the helm and the spacious cabin show the entry of the Cigarette in a new watercrafts category. The alliance with the AMG provides extra refinement and the finishing work, while the style, typical for the German manufacturer is exquisitely fitting the boat.

The partnership of the two brands is extremely effective, as four Cigarette models already bear the AMG insignia.

– The Cigarette AMG Electric Drive, of which we have talked about in the beginning of the article 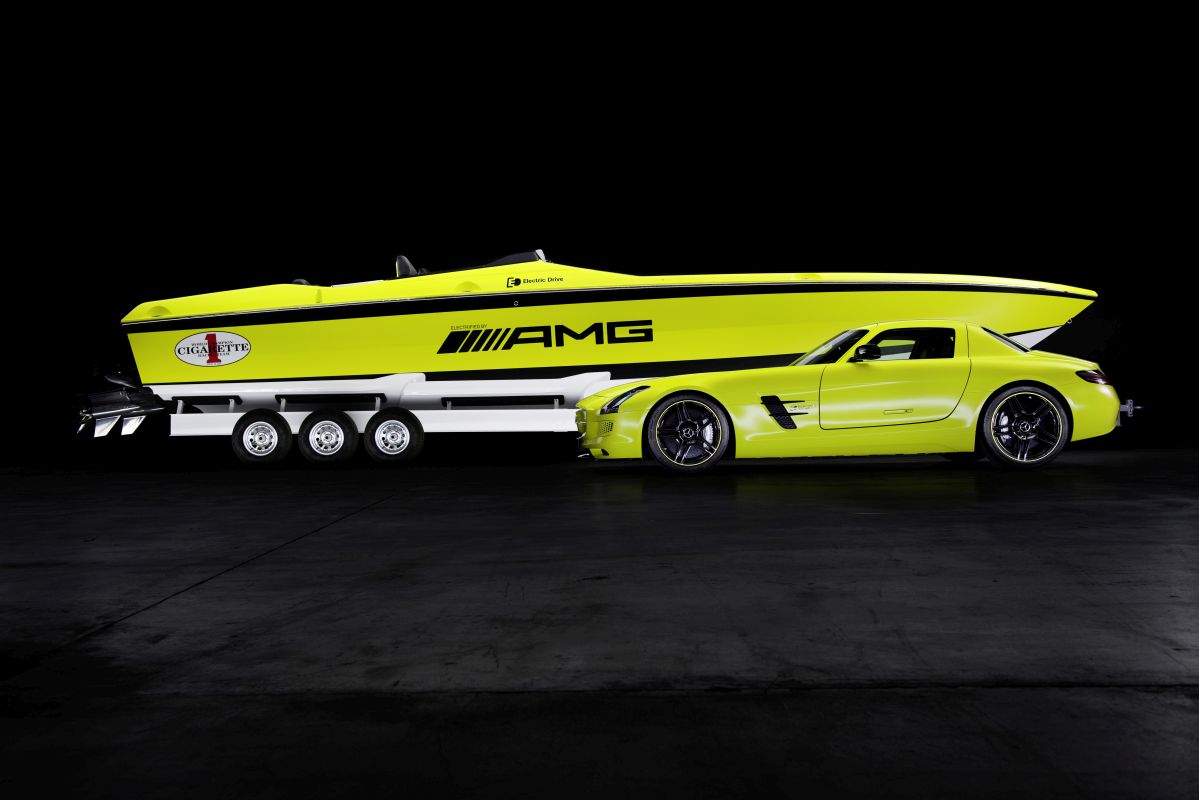