An incident with Sebastian Vettel under the Safety Car made Lewis Hamilton collapse to the fifth spot. The German finished four, right ahead of him, even after getting a 10-second penalty for dangerous driving. At the top, it was Daniel Ricciardo of Red Bull, with Valtteri Bottas of Mercedes coming second and Lance Stroll of Williams getting his maiden podium.

There were three safety car deployments, together with a red-flag race stoppage. It was a rollercoaster ride for the 3-time world champion Lewis Hamilton. Starting from pole, the Brit saw things turn upside down in the 13th lap, after the Safety Car was first sent to the racetrack. It had hardly gone into the pits, that it was called back again following a crash between the Force India teammate, Esteban Ocon and Sergio Perez. This time, Hamilton kept complaining that the Mercedes-AMG GT S driven by Bernd Maylander ran way too slow, but he failed to get the right speed when coming out of turn 16 in the 20th lap and was rear-ended by Sebastian Vettel. The war had just started, as Vettel pulled alongside him and intentionally crashed into him. For this maneuver, the German got a 10-second penalty. 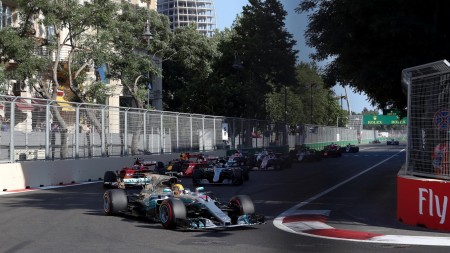 “It creates a precedent for the kids that come to the sport”, Hamilton said after the race. “Formula 1 is for grown-ups”, was Vettel’s rough reply.

The race was red-flagged on lap 22, so that the debris could be cleared away from the racetrack and the teams had the chance to repair damages. From the very start, Valtteri Bottas and Kimi Raikkonen touched, so the Finn needed a makeover. He would eventually retire, after being penalized for their teams fixing the car outside the fast lane in the pits. 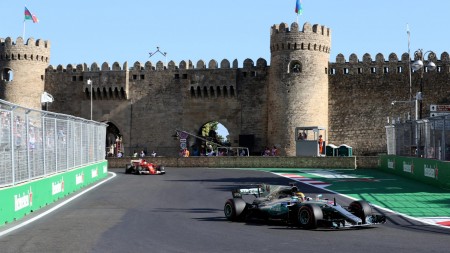 Vettel received a new nose on his car, while Mercedes worked on Hamilton’s damaged diffuser. At the restart, Hamilton resumed his lead from Vettel, while the Williams drivers had moved to third and fourth. Ricciardo was coming from behind like a fighter jet, even though an early unplanned pit stop had dropped him to the 17th place. The Aussie passed both Williams reaching the third position.  Hamilton needed to pit again, as his headrest had an inappropriate position, so he dropped to the 8th spot in lap 31. Even with the 10-second stop&go, Vettel managed to pass the Mercedes driver, but lost precious time, as Daniel Ricciardo, Valtteri Bottas and Lance Stroll had managed to climb through the ranking. Ricciardo gets his 5th victory in Baku in what he calls “a crazy race”.

Formula 1 resumes where it left off in two weeks’ time in Austria.