They are the champions! Mercedes wins 4th Constructors’ Championship title in a row

Lewis Hamilton won the US Grand Prix and took Mercedes-AMG PETRONAS Motorsport straight into a brilliant record: 4-time consecutive Constructors’ World Championship title. The Brit’s main rival, Sebastian Vettel, ran behind him for the second spot on the podium. Even though he made his way to the third position at the very last lap, passing by Kimi Raikkonen, Max Verstappen was penalized and taken back to fourth.

A five-second penalty put Ferrari’s Kimi Raikkonen back in the third spot, but Max Verstappen, starting 16th, had been voted Driver of the Day. His teammate, Daniel Ricciardo, ended his race early, with an engine failure. The other Mercedes driver, Valtteri Bottas, finished fifth. 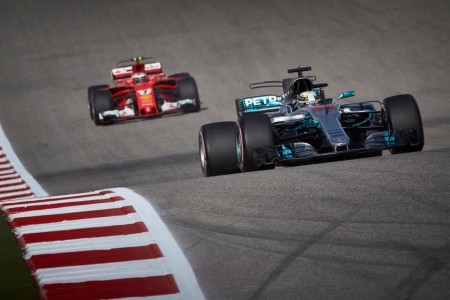 Ferrari looked every inch as winners, but it soon became clear that the Silver Arrow behind the leading Vettel was faster. So Hamilton made his way to the leading position in the sixth lap, which he only let go when changing tires. His only tense moment was on the 20th lap, as he emerged from what turned out to be his sole pit stop, and Vettel, who had stopped three laps earlier, had wiped out a 4.4s deficit and was almost right on him. Hamilton was not and scolded the squad, but quickly pulled away again. When Vettel had to go into the pits again, on the 39th lap, it was clear that Mercedes would not need to do the same.

Vettel had thus by then fallen to fourth place, as Bottas and Raikkonen were having their a single-stop duel for second well behind Hamilton. Eventually the experienced Finn passed his younger countryman, and as Vettel was by then coming after Bottas like a jumbo jet, Ferrari was fighting to limit the damage. When Vettel passed Bottas on the 51st lap, the Reds immediately switched Vettel for Raikkonen, maximizing the German’s score, who had already fallen way behind Hamilton’s lead with 331, just 265 in the German’s account. 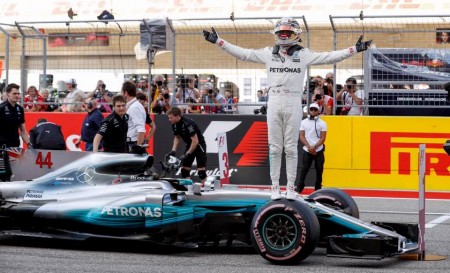 Raikkonen, meanwhile, had his hands full with Verstappen, the Dutchman that had eaten up the gap after having started 16th, due to engine penalties. The young Dutch flew to the third position, after a brilliant duel with Ferrari’s Kimi. He was already preparing to get on the podium, when the news stroke: a five-second penalty for exceeding track limits to make the pass had dropped him behind Raikkonen.

The sister Silver Arrow driven by Bottas trailed home fifth. Sebastian Ocon and Carlos Sainz were entangled locked in a duel for many laps, but the Frenchman never gave the Renault debutant the opening he was looking for. Likewise Perez, in the other Force India, who had earlier asked his team to tell Ocon to let him by, lacked his partner’s pace but just fended off final points scorers Massa and Kvyat at the flag.

Though Hamilton still needs nine points to secure the drivers’ title – just fifth place in Mexico next weekend will be enough – Mercedes cemented the constructors’ championship, and now have 575 points to Ferrari’s 428, Red Bull’s 315 and Force India’s 159.