Mercedes-Benz Vision AVTR is the car inspired by the famous 2009 blockbuster Avatar, a winner of no less than three Academy Awards. The electric concept was revealed at the 2020 Consumer Electronics Show in Las Vegas.

The name of the visionary concept, AVTR, is actually short for Advanced Vehicle Transformation. For the development of the model, the Mercedes-Benz engineers and designers worked closely with those that made Avatar more than a decade ago. Director James Cameron, producer Jon Landau and art directors Ben Procter and Aashrita Kamath went up on the stage together with the futuristic Mercedes-Benz prototype. 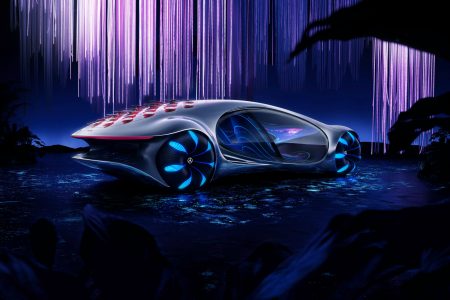 With a transparent shell, a spectacular opening and closing of the doors, inspired by the banshee or ikran from Avatar, the concept is conceived to blend into the ecosystem of the future.

With a design typical of a sporty coupe and elements of active aerodynamics, the Mercedes-Benz Vision AVTR features 33 multi-directionally movable bionic flaps at the rear. They mimic the reptile scales and move simultaneously to steer the airflow around the vehicle. “It is a living creature”, Mercedes claims.

The cab continues to lift the boundaries between the vehicle and the living beings, as the flowing lines of the exterior integrate an infotainment system based on holograms and real-time 3D display. A curved screen supports the visual connection between the passengers and the outside world. 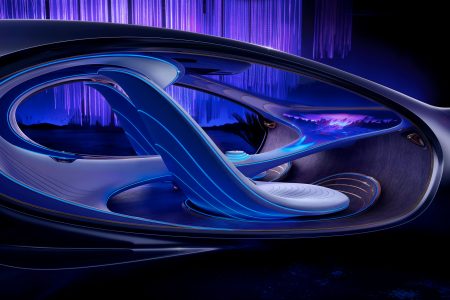 The multifunctional control element in the center console allows the driver to intuitively control the vehicle by simply placing his hand – as long as he does not want to travel autonomously.

The seats are covered in Dynamica microfiber, while the floor made of karuun rounds up the cozy ambiance.

The Mercedes-Benz Vision AVTR features a battery with a capacity of 110 kWh and made of recyclable materials, that provides it with a range of up to 700 kilometers. Two electric motors develop 476 horsepower. The two axles can be engaged in the same or opposite directions, allowing the concept to move sideways and granting it with an animal-like behavior.