Can the S-Class Cabrio outsmart the Rolls-Royce Dawn?

At IAA, both Mercedes and Rolls-Royce tried to sway eccentric millionaires with their newest convertibles, the S-Class Cabrio and the all-new Dawn. Time to put them under the microscope and decide which one’s the best, courtesy of auto motor und sport.

Driving “topless” still has a wide fan base and a lot of cars to choose from. But open-top driving is not always the same. Which cabrio is the new benchmark, the RR or the Merc? 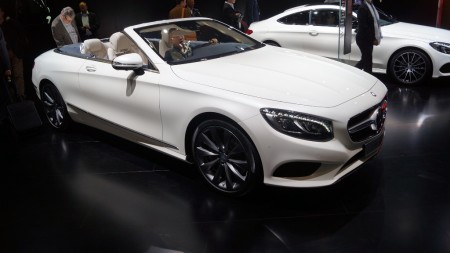 First, the cold figures: The S-Class Cabriolet brings is available in S63 AMG guise with 585 hp. The V8 Biturbo pressed 900 Nm on the asphalt and turned into seven gears up to the top speed of 250 km / h. The 2.1 tonnes weight seems to magically evaporate given the 3.9 seconds the S-Class needs to get from zero to one hundred. Questions about the fuel consumption are actually beyond the point. Nonetheless this is the official value: 10.4 liters per 100 kilometers.

Rolls-Royce Dawn is a step ahead in therms of luxury and image. Slightly. And exactly at this point, the two rivals differ already clearly. The Rolls hides itself from such trivial data like consumption and power. A few key figures did made our way, though. The 6.6-liter twin-turbo V12 found under its long bonnet develops 570 hp and 780 Nm brings. The gearbox is an eight-speed automatic so hat tip to Rolls-Royce for fitting a newer transmission. 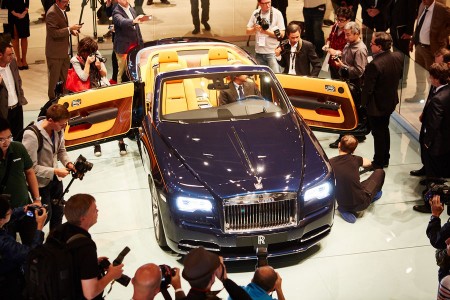 It is the interior that brings the most interesting details to light. Here drivers and passengers are caressed by the finest materials. Leather, wood and noble carpet set to prohibits any contact with the dirty footwear. Each controller and each button behind the massive “Suicide Doors” are a work of art. Even the cigarette lighter has the character of a Rodin sculpture.

Mercedes S-Class Cabrio, meanwhile, can be described as simple chic. And sometimes less is more. The Mercedes is fit in the best of materials and exudes top quality right from the second you take a seat in its large armchairs. From the feeling point of view, the S-Class Cabrio is at the cutting edge, a modern car with a modern twist.

Perhaps the biggest difference between the Rolls-Royce and Mercedes arises from exactly this sheer differentiation in therms of modernity. Dominated by its analog clock on the dashboard and the molded classic instruments, the Dawn catches our attention via an entirely different charm than the current Daimler. The Mercedes spreads a sense of craftsmanship and technical perfection, the Rolls of luxury and attention to detail.

In the end, we cannot ignore the considerable price gap between the two luxury convertibles, as well. The S-Class convertible in the AMG version will probably account for around 171,000 euros while its British “counterpart” will fetch no less than 330,000 Euros at home. The predicate is true luxury, however without doubt for both.