Can the new BMW 7 Series outsmart the S-Class? First review by Autocar

More comfort, more luxury… The all-new BMW 7 Series aims higher than ever, trying to beat Mercedes’ mighty S-Class at its own game. Does it have what it takes to do that? Autocar is quick to address this conundrum.

BMW 7 Series’ B57 engine is mated to a standard ZF eight-speed automatic gearbox and develops 7bhp and 45lb ft more than the N57 engine it replaces, with 261bhp and 457lb ft. Along with the aforementioned consumption and CO2 emission figures that better the old 730d by a staggering 12.4mpg and 29g/km, it endows the most affordable of the new 7 Series models with the same 0-62mph time of 6.1sec and 155mph top speed as its predecessor. 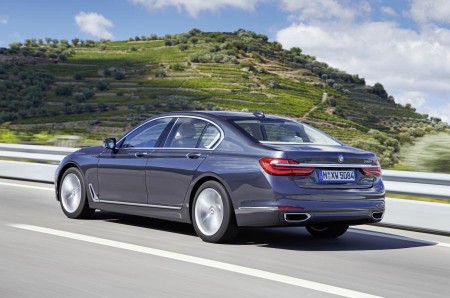 On the move the diesel engine provides lively off-the line acceleration and gathers speed in a wonderfully nonchalant manner on a pegged throttle. The transmission uses a longer final drive ratio and a shift strategy that operates in conjunction with the satellite navigation system for greater efficiency. Buyers can choose a Steptronic variant of the ZF-produced gearbox with shift paddles on the steering wheel as an option. Leave it in automatic and the mode the revised gearbox shifts up well before engine noise threatens to become an issue.

The new 7 Series tries to outsmart the perennial technology leader S-Clas with a raft of innovations including an intelligent lightweight carbonfibre construction solutions, new-generation six-cylinder petrol and diesel engines. Again, carbonfibre can be found within the header rails, sills, B-pillar, centre tunnel and C-pillar, bringing a 40kg reduction in weight over its predecessor.

Further weight savings have been achieved with changes to the bodyshell, which receives newly designed aluminium doors (weighing 12kg less than before) as well as an aluminium roof panel. The new 730d as tested tips the scales at 85kg under that of the outgoing 730d, at 1755kg, making it 25kg lighter than the Audi A8 3.0 TDI and Mercedes-Benz S350 CDI. It’s also 200kg lighter than the Jaguar XJ 3.0D.

Can all these weight savings help the all-new BMW 7 Seris reinvent itself in therms of sheer sportiness? The answer is only partly yes. Yes, the 7 Series is most likely still the most engaging car in its class to drive, but the focus has shifted, making this latest 7 Series more limousine-like in character than any of its predecessors. This impression is even more apparent the moment you sit on the new seats, which are more softly cushioned and more substantial than those used by the fifth-generation 7 Series, both up front and in the rear. 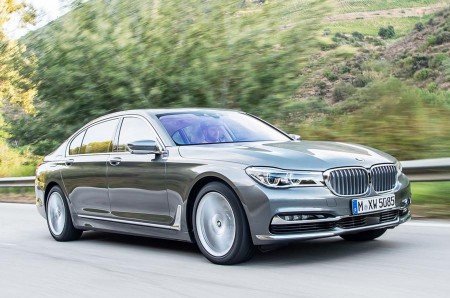 The newly developed suspension system now boasts air springs front and rear, rather than just at the rear as before. The driver can raise ground clearance by 20mm at speeds below 22mph, while in Sport mode the ride height is automatically reduced by 10mm at certain speeds.

The way the new saloon gets along is subtler than ever, in Comfort Plus mode the new BMW being much quieter and noticeably smoother than its predecessor. The suspension is far less sensitive to surface coarseness and has greater ability to sponge away bumps, making it more relaxing and unruffled to travel in over longer distances. In Sport mode, handling is superb, courtesy of inspired damper tuning providing excellent body control and truly impressive B-road ability for such a big car.

There’s a new electro-mechanical steering system which reverts to a fixed-ratio rack in place of the variable-ratio rack of the old model. The new 7 Series also comes with an optional rear-wheel steer function, providing up to 3deg of countersteer for added manoeuvrability in town, or 2deg of parallel steer for greater agility on the open road. The weighting is lighter and more accommodating than before, but it lacked the consistency of the earlier example we drove when turning from dead centre. It is fine at lower speeds around town. 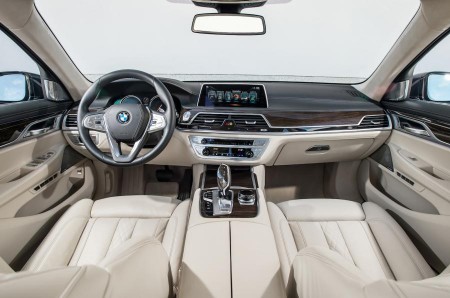 Significant differences come at the interior alongside an evolutionary update of the new dashboard finished in higher-grade materials that help provide a more luxurious feel than at any time in the model’s 38-year history. Among the highlights are new digital instrument graphics that change colour depending on the driving mode, touch-sensitive air conditioning controls and the fifth-generation iDrive system with a new touchpad and touchscreen functions as part of an optional Navigation System Professional. The new infotainment king allows you to operate various functions in a similar style to that of a smartphone with pinch, point and swipe commands, or alternatively via the rotary dial on the centre console.

Optional gesture control is also offered for the first time. It uses a three-dimensional sensor mounted within the headlining to detect hand movements that control functions including the volume of the stereo and the acceptance or rejection of calls. If that’s not enough, an upgraded speech control system is also available.

After seeing the car in the flesh, the Britons can attest that despite only incremental increases in exterior dimensions, there is a feeling of greater accommodation whether sitting up front or in the rear – the latter of which feels truly expansive in long-wheelbase guise. In therms of design, the new 7 Series receives an evolutionary styling that helps provide it with visual continuality, all at the expense of outright presence the S-Class offers. 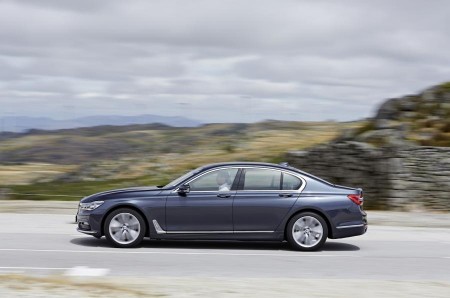 Even so, the verdict is unequivocal. The new 7 Series is a significantly better car than its predecessor. In 730d guise, it delivers strong performance and impressive refinement along with outstanding economy. Most important, it still manages to provide an engaging driving experience while delivering much-improved ride comfort.