Mercedes’ highly successful C-Class meets the new Jaguar XE and one unexpected rival, BMW’s 4 Series Gran Coupe, in a comparison test orchestrated by famed British magazine CAR. Who comes on top? Read on to find out.

The test starts on a high note for Mercedes’s junior sedan. The Britons state that the C-class has completely shaken the sector up by refocusing on comfort and luxury. A proper junior S-class, it’s the only car in the class to offer air-sprung suspension. And we couldn’t agree more.

Of course, Bavarian finest couldn’t miss this test. But instead of the 3-Series sales titan, CAR chose its fancier 4-Series GranCoupe brother. Fractionally sharper in style and dynamic terms, its lift-back boot gives it a practical advantage over the 3-series, but most of what we’ll be talking about here applies to the 3-series too.

Heading over to the Big Cat (or small, depending on classification), CAR is not shy about its favorable sentiments towards it. Based on a cut down version of the new XF’s platform, the rear- (and eventually four-) wheel drive XE is powered by a brand new range of engines, features fancy double-wishbone front suspension and a body made almost entirely from aluminium.

A quick price comparison reveals that the new Jaguar is actually not the cheaper of the bunch. When picking an XE that means a choice between 161bhp and 178bhp versions of Jag’s new Ingenium engine family, and six-speed manual or eight-speed ZF auto transmissions. XEs start at less than £27,000, but mating the quicker diesel with the auto ’box and racey-looking R-Sport trim bumps that to £34,775. 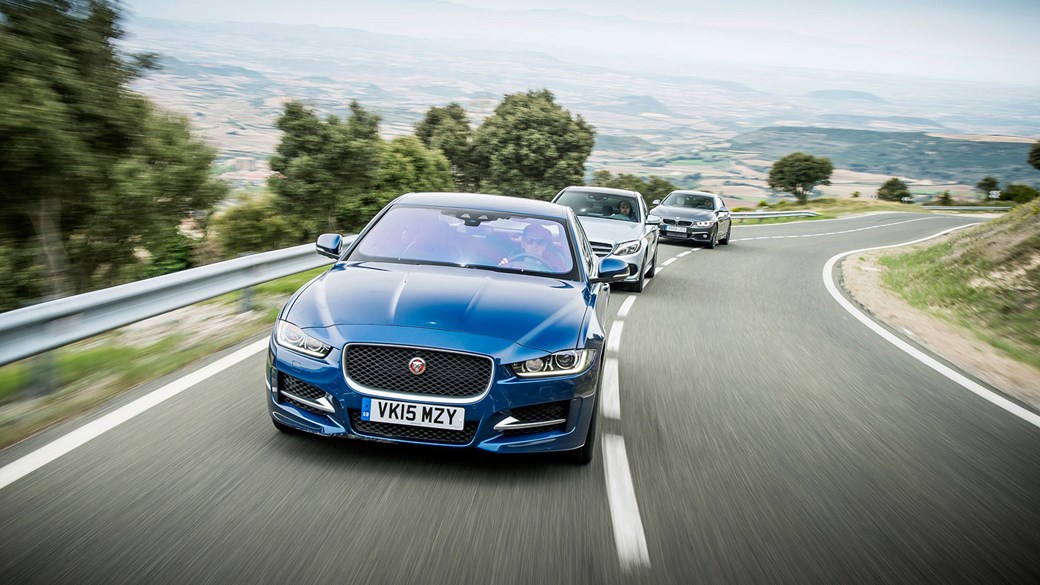 Ok, ok, so how do they drive? Given that these are sports saloons, none of them feels truly rapid, and neither are any of their engines remotely characterful. You’ll need petrol power, or the BMW’s optional six-cylinder diesel, for that. But they’re grunty enough to keep you interested, and possess sufficient ratios in their transmissions (seven gears in the Merc, eight in the others) to keep them in the 2000-4500rpm zone where the turbos like to play.

Stomp the right pedal and the 420d pulls strongest, its 187bhp outpunching the Jag by 9bhp and the Benz by 19 (the pricier C250 CDI parries with 201bhp) to power through to 62mph in just 7.3sec. The Merc makes the same 295lb ft as its Munich rival, the XE 317lb ft, but the Jag fails to capitalise on its 22lb ft advantage, needing half a second longer to hit the benchmark, while the Merc shrugs off its power deficit to get within a tenth of the BMW, at 7.4sec. Swap Spanish mountains for German dual carriageways and the Jag would be all done by 140mph (a sop to the insurance industry, we’re told), while the Merc’s 144mph would trump its rival by a mere 2mph. 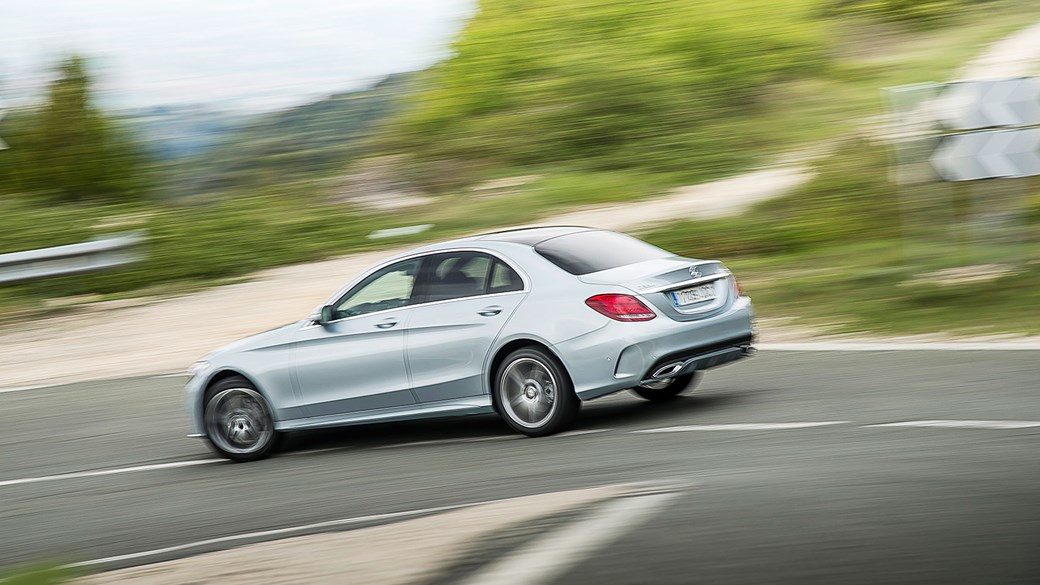 In C-Class’ case, body motions are well controlled and the fast 2.1-turns variable-ratio steering rack imbues the C-class with a surprising pointiness, but never at the expense of sophistication or stability. This can do the twisty stuff with ease, but it’s not massively engaging. Task it with a high speed A-road run though, and that’s where it shows its mettle.

The 420d is different. Rawer, more feelsome, less comfortable, it doesn’t deal with surface imperfections anything like as well, but keys you into that surface better. There’s less understeer in the fat-tyred BMW and more opportunity to experience the traditional sensations of a rear-drive chassis. No-one really turns the ESP off in these cars, much like no-one drives their new Lambo at 202mph, the difference between C220 and 420 being that you actually can in the BMW, and you might want to.

The Jag complies too; at least to demands to deactivate the ESP, though the grip/grunt ratio is skewed in favour of the rubber so if you want to make tyre fires you’ll need the 335bhp XE S – or the XE R if you’ve got the patience to wait a year or two. But what even this humble diesel does show is that there’s more to a great driver’s car than that. A beautifully sweet chassis balance and a fantastically supple ride mean every mile and every road is a good one in the Jag. 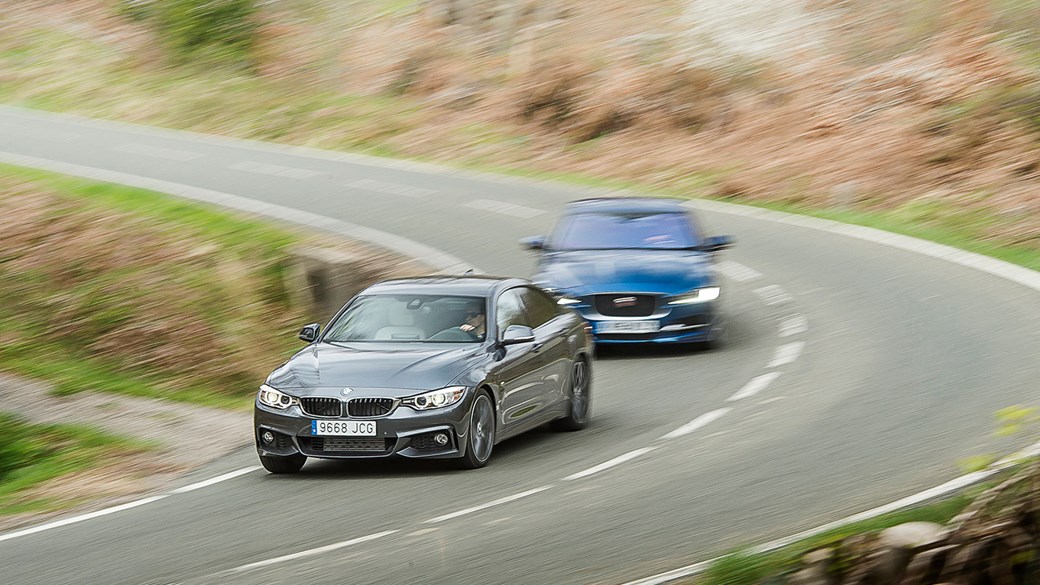 Hairpins highlight the slower steering at the extremes of lock, which demands an extra wrist twist compared to the C220, but it’s misleading. It’s the XE and not the C-class that’s the most agile, the keenest to turn. And even if the Brit’s first electric steering system on a Jaguar saloon car doesn’t sparkle with the same textural detail as the company’s best hydraulic systems, it’s supremely accurate, perfectly weighted and delivers more feel than the overdamped Merc’s.

The BMW, exciting as it is to drive, does fall first, and not merely because of the Gran Coupe’s price disadvantage. Had we thrown in a 3-series it would have suffered from the same debilitating lack of refinement that relegates this 4-series to third place. These are sports saloons, but they’re also meant to be miniature luxury machines and the 4’s uncouth engine and poor road noise suppression doesn’t cut it.

The Jaguar and Mercedes are harder to split – not because they’re so close in character, but because they’re so different. For many buyers, for casual car fans and your company’s accountant, the C-class is unarguably the better car. It oozes class, it’s got the best interior, it’s brilliantly refined and yes, it even handles tidily. 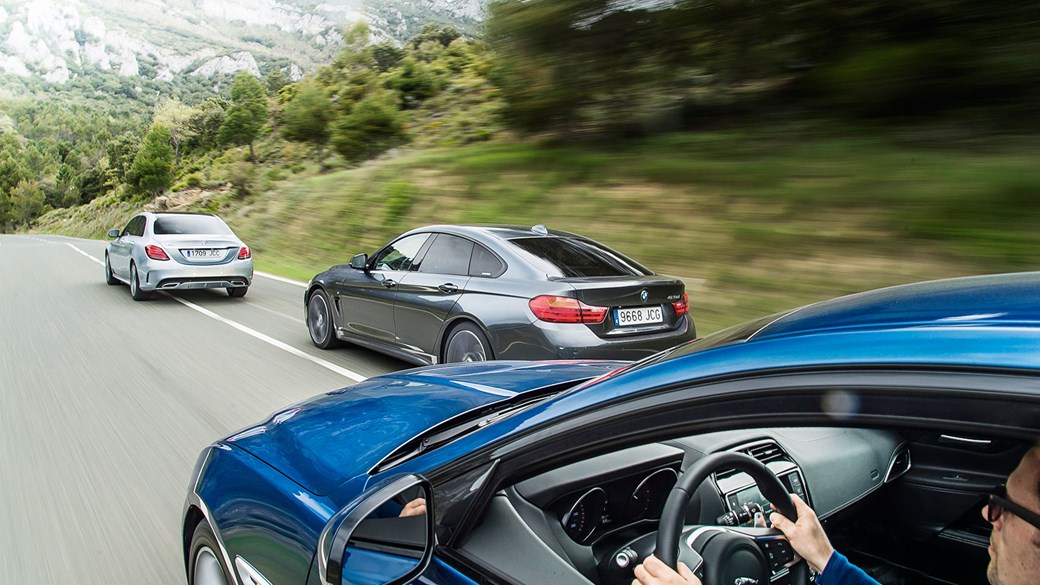 Ultimately (just as expected) the Jag remains CAR’s favorite, offering most of the C-class’s refinement, but without its sense of detachment, and absolutely without the compromises in refinement the BMW demands.

HEAD OVER TO CAR MAGAZINE FOR THE COMPLETE FEATURE.