The business class is dominated by Audi, BMW and Mercedes. Now an all-new 5 Series is here to fight the one year old E-Class and the soon to be replaced A6, claiming the pole position within the top trio. Does he get it? FIRST COMPARISON TEST via auto-motor-und-sport.de.

We were all very excited about the new 5 Series, whose marketing people praise their networking and intelligence so fervently as if the engine and chassis were only accessories. But now the 5er gets the opportunity to show how it drives too. In the first test against its rivals: the three-liter diesel in 530d guise versus Audi A6 3.0 TDI Quattro and Mercedes E350d.

A6 and the sovereignty of age

When the traffic lights turn green, the A6 leaves the 5-series and the E-Class, which struggle more for grip, in the rearview mirror. Quattro is always superior, not just on snow and ice, but also in the wet at temperatures around the freezing point. Audi is wise not to offer its 272-horsepower TDI with front-wheel drive, the 580 newton meters of the joyfully rotating V6 is as fast as it used to (0-100 km / h in 5.4 s). And the V6 plays very well double-pass with the seven-speed dual-clutch transmission, which makes the gentle grumming engine easy to pull on a wide rev-band. There is no real lack of anything in this Audi, which has been built since 2011 and has reached a maturity level, which can be seen not only in fine-clicking rotary knobs and excellent processing. No one has to prove anything. The A6 strength rests in itself, which of course does not mean that it can not be fun. With the drivetrain set to “Dynamic”, the easy-to-handle, but quite pleasant steering is already taut, the running engine bites even more willingly, and the air spring suspension (1,950 euro) exchanges a little of the slightly dampened suspension comfort against handling finesse.

Plenty of space and comfort in the Audi

The rounds over the empty Hockenheim ring make fun with a good pressure point of the powerful brake, reliable steering, no under-steering and gentle glide over all four wheels when the slope shows the tire the cold shoulder.

The front seats (which are set a bit too high) are comfortable, as is the rear bench, the space and the feeling of airiness. In a stable straight run over the highway, even at 200 km / h, noises are not noticeable and reserves seem available up to the electronically governed 250 km/h point. This can also be read in the head-up display (1,380 euros), which has been added to the A6 at a later date and therefore looks exactly like a large projector case mounted over the round instruments.

But this is a limousine which is no longer reaching for the final scream when it comes to connectivity and driver assistance. The more aggressively designed successor comes in 2018. E-Class, built for the long haul

At Daimler, people always knew how to pay for things and quality. And quality – the E-Class delivers in abundance. It is always amazing how versatile this limousine is. In the soft mode, the air-suspension Air Body Control (2,261 euros) gently sweeps over tar patches and waves and lets the body swing in the best Mercedes style. This is not a good thing for any stomach – especially if sitting in the back with the backrest slightly flat. And on the other hand, the Mercedes hugs the curves cooler in the dynamic mode. Gorgeously binding is the steering now with good feedback, the front axle gript enormous and the stern always compliant. Wow, this is a real joy to drive.

The performance on the motorway is even more impressive. The Audi may be good here, quiet, comfortable, everything. But the Mercedes is also noticeably better thanks to the acoustic comfort package (1.309 Euro) and air suspension, keeping the road and the environment far from the driver.

In detail, the electronics are somewhat tricky to use and in spite of the visibly displayed high-tech look, the E-Class is well furnished. The good V6 is not so well insulated as in the S-Class and therefore at low speed quite audible. But in terms of comfort, space, safety, and driver-assistence, the E-Class offers a total package that needs to be cracked. When you glance, you do not see immediately that it is the new one. But the new one is underneath the sheet – for example, in the form of the new platform, lower weight and in the well-known iDrive control logic, which has only been extended by new functions. You do not have to get used to it, but can now also silence the radio with silly gestures, reject calls, control the navigation and some more.

But that is not all: free parking in the area? The car knows it. 500 meters away is a speed limit? The 5er warns ahead of priority-crossing-intersections and of the danger of becoming a ghost-driver because one wants to drive over the exit onto the motorway. The 5 series is something of connected and – semiautonomous follower and automatic parking included – clever.

But how does it drive? What is known from the 7er B57 diesel with 265 instead of hitherto 258 hp, the eight-speed automatic, the adaptive dampers (1,190 Euro), the four-wheel steering (1,250 euros). And then to the pure pleasure of piloting on the Hockenheim ring. It takes up to the first curve, then it is clear that the new chassis with double wishbones at the front and five-spoke-axle at the rear is a fun seeker. How the 5er infiltrates, how he keeps the line, as he reports back: This is great BMW cinema up to the driftability. Yes, the traction should be better, at least as good as in the Mercedes. But one thing is clear: Still, the nerds do not have the whole thing to say at BMW, nor may the chassis developers be a little wild. And at the same time, they also improved the comfort. The wind is still hissing around the A-pillars, but the BMW plays in the same league with the Mercedes – not quite so sovereign and decoupling on the highway and slightly tighter.

BMW is also about the engine. It runs silently, but despite its sound- and heat-insulating encapsulation called Syntak, is quite audible. With an increase of 60 Newtonmeters compared to the predecessor, it can push the 530d even more impressively than before, which is of course also down to the decrease in weight of up to 100 kilograms. Unobtrusive and well-behaved as before is the eight-speed automatic transmission, which also jumps up in jagged sports mode just before 5,000 tours and the red range from 5,500 turns. 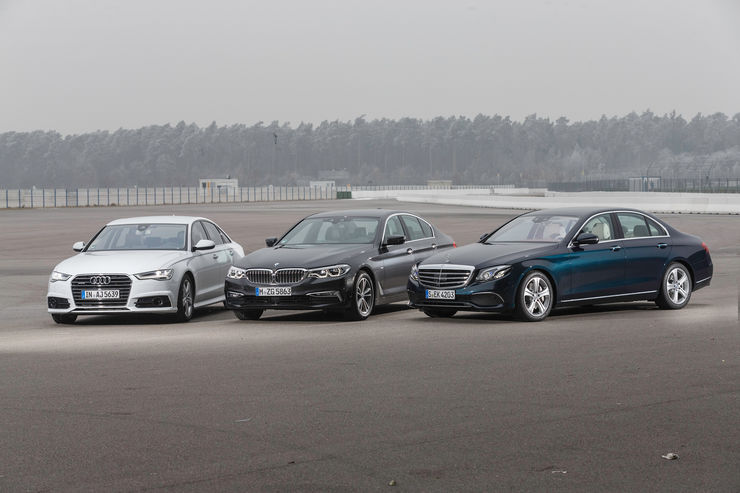 1. BMW 530d
491 points. The 5er has eradicated old weaknesses and expands known strengths. It is a comfortable and spacious driver’s car with infectious sports spirit – a deserved victory.

2. Mercedes E 350 d
471 points. The E-Class cements its reputation as a harmonious, balanced limousine with a lot of safety and an impressive long-distance comfort. The dynamic qualities are also remarkable.

3. Audi A6 3.0 TDI Quattro
464 points. The oldest car ends up in third place. The A6 trails the competition in assistance systems. If driving, however, the A6 still fares well.