Brothers, not rivals. The new Mercedes-Benz A-Class Sedan to be sold alongside the CLA

The new Mercedes-Benz A-Class will be sold in the United States alongside the CLA, the premium car company confirms. There is no rivalry between them Mercedes claims, as the company is resolute to fit them with totally different personality, although quite similar features.

The Mercedes-Benz officials announced customers they should expect the A-Class Sedan in showrooms early next year. The A-Class Sedan will not be a killer for the 4-door coupe, they say. The next generation of the CLA is set to arrive sometime in 2019.

Massive discounts would keep the CLA customers coming, once the Sedan A will be available. That is the company’s strategy to differentiate the all-new sedan with state-of-the-art technology and the CLA, on the market for quite a while. Yet unconfirmed, the prices for the A-Class Sedan in the United States should start somewhere around $35,000. In Germany, the most affordable of the models stands at 30,916 Euros. 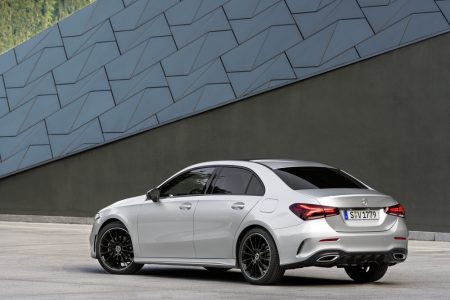 If the price differentiates them, the looks will bring them closer. The CLA is set to get a new design, similar to that of the A-Class, but in time, it will turn more modern, sleek and stylish.

The 4-door coupe will inherit the same powertrains as the new Mercedes-Benz A-Class Sedan. That means that the fans of the CLA will be getting the A 200 with 163 horsepower and the A 180 d with 116 horsepower.