Lewis Hamilton and Mercedes-AMG Petronas have already reached an agreement for next season. The Brit and the team signed a two-year deal.

Sir Lewis Hamilton signed the extension of his contract with Mercedes. The Brit boasts an impressive background with the Silver Arrows. He won six World Champions titles in 9 years with the team, of the seven that he accounted. With the seventh, last year, he equaled Michael Schumacher’s record.

The only season he failed to take the trophy home since he has been driving for Mercedes was 2016. Back then, his team mate, Nico Rosberg, crowned himself World Champion, right before announcing his retirement.

Mercedes-AMG Petronas Formula F1 Facebook page made the announcement today, around noon and Toto Wolff’s page confirmed the information. After the Styrian Grand Prix, the Team Principal told the media in his home country, Austria, that the team would not wait to sign a deal with Lewis lake they did the last time. This year, Lewis and Mercedes reached a deal in February, not long before the beginning of the season. 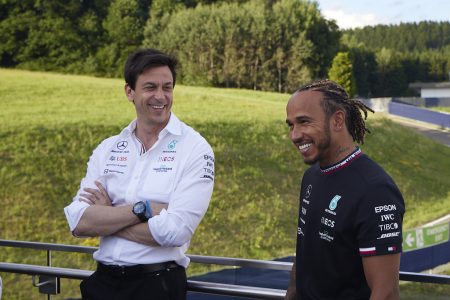 Lewis Hamilton is now getting ready for the qualifying session of the Austrian Grand Prix, the second race taking place in Spielberg, at the Red Bull Ring. Red Bull Racing driver, Max Verstappen, won the last one, last week and is comfortably in the lead of the overall ranking. The Dutch has 156 points, while Lewis took 138.

Lewis Hamilton signed. One Mercedes vacant seat for next season

Mercedes has only one driver seat vacant for next season. Unofficial sources indicate the replacement of Valtteri Bottas with George Russell. The latter is currently a Mercedes driver, driving for Williams.

Russell was inching closer to a debut with a win last year at the Sakhir Grand Prix. But a major error of his team, that gave him the wrong tires, sent him from the lead to the 9th position.