It was an absolute madness in the Brazilian Grand Prix, as the race was interrupted twice, six drivers failed to cross the finish line and even Ferrari’s Kimi Raikkonen crashed. Lewis Hamilton won, but teammate Nico Rosberg is still 12 points ahead one race to the end. Abu Dhabi is the place where the world champion will be decided.

In Brazil, the race started behind the Safety Car. Lap 2 was inches away from a mass collision. Max Verstappen claimed he was unable to see much in front of him, as all drivers feare aquaplaning. 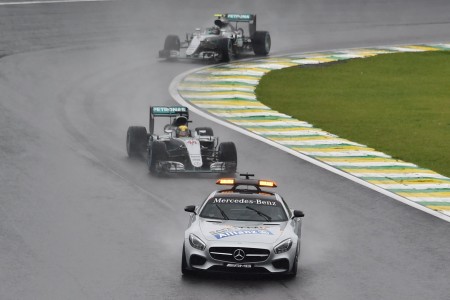 Lap 4 – Hamilton was again about to overtake the Safety Car, but he had a good reason for it. The Brit complained that water was coming into his helmet through the top of his visor.

The Safety Car went out in lap 7, but there was zero visibility along the straight. Even so, Max Verstappen overtook Kimi Raikkonen in a flash. 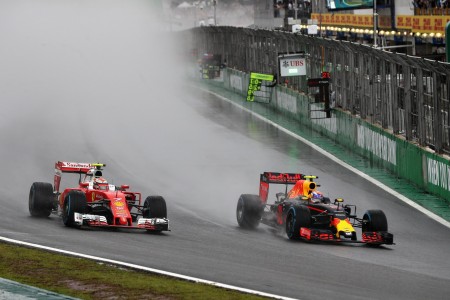 In lap 11, Sebastian Vettel lost control and span, but managed to return. It was not as easy for Markus Ericsson though. Three laps later, he slammed into the guardrail and had to retire. The Safety Car was deployed all over again. Max Verstappen and Ricciardo went into the pits as the pit lane was closed and the Aussie was penalized by 5 seconds.

Once the Safety Car was out, the accident hazard was back in. It was Kimi Raikkonen’s turn to lose control of his Ferrari.

“How many people do you need to crash before we stop the race? It is just stupid”, Vettel yelled. In lap 21, the red flag was on and the cars were sent into the pit lane. 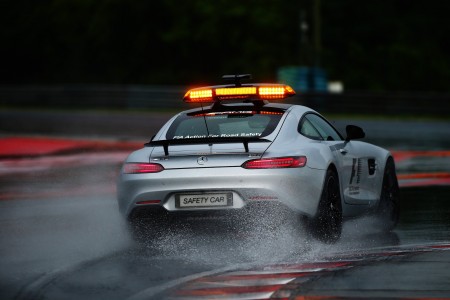 Half an hour later, the drivers were getting ready to race again. Gentleman Hamilton gave his jacket to one of the grid girls. The race was underway, again under the Safety Car.

Lap 28 and the red flag was on again, as massive rain drapes covered the circuit. “The track is fine”, Hamilton ironically contradicted the decision. Nico’s presence right behind him was like a knife in the back for the Brit. During the break, Hamilton decided to give up on his customized helmet with an Ayrton Senna tribute design, as its tightness failed him. 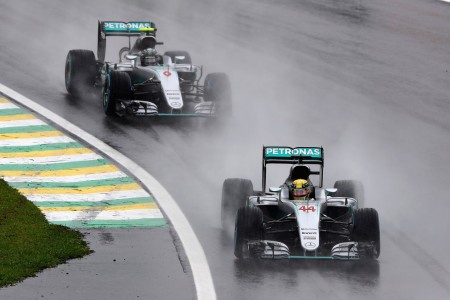 The Safety Car finally came out in lap 32 and that was all Verstappen needed to overtake Rosberg. In lap 40, the 19-year old showed the control of an experienced driver as he lost control just where Kimi Raikkonen had crashed, and was just inches away from crashing. He miraculously managed to steer back onto the racetrack and kept his position ahead of the championship leader. But not for long, as he needed to go in and change damaged tires and returned into the 12th position.

In lap 47, same spot, Rosberg went over the white line and almost lost it. He was then ever further behind Hamilton.

The crowd’s favorite, Felipe Massa, ended his home race in a terrible manner. He crashed and stopped right at the pit lane entrance. And the Safety Car was again on the circuit, with Lewis Hamilton complaining about his tire temperature behind the Mercedes-AMG GT S.

“How many more crashes do they want to see?”, rhetorically asked Rosberg.

“They are waiting for a crash to happen”, Verstappen took a wild guess.

The Safety Car was out in lap 55 and a new spin happened: it was Fernando Alonso, who surprisingly managed to get back on the racetrack. The Spaniard dropped to the last position, the 17th.

The Red Bull managers’ hearts skipped a beat as Verstappen overtook Ricciardo. Daniel Kvyat was the next victim and then the Dutch crawled over Ocon, Nasr and Hulkenberg. 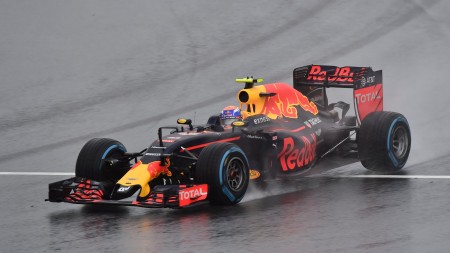 Vettel was chasing Carlos Sainz junior, but he had to mind his own position as Verstappen was closing in on him, 5 laps to the end. And it only took the Flying Dutch a fearless move to overtake the German. Sainz was easy prey for Max as well. “I think we’re witnessing something special here”, the Red Bull boss Christian Horner had anticipated.

At the front, the Mercedes drivers had broken away and Lewis Hamilton won the mad race in Brazil. Teammate Nico Rosberg was second, but still the leader of the championship. The final showdown will be in two weeks in Abu Dhabi. It all happened before the eyes of the Guns N’Roses guitarist, Slash, who brought the “November Rain” onto the racetrack. 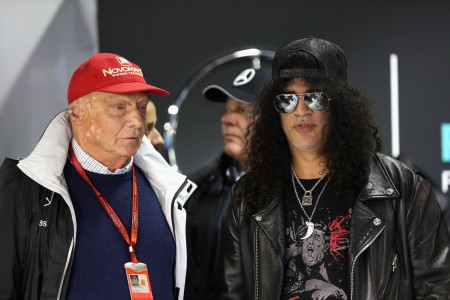