Mercedes launches new 2.0-liter turbo engine with 48 V technology on the two-door versions of the E-Class, the Coupé and Cabriolet. The block has hybrid traits.

The new version is called E 350 and is good for 299 hp and 400 Nm. You cannot easily replace a solid six-cylinder engine, but Mercedes will get the power, thanks to a Twinscroll turbo, of a four-cylinder engine with drugs0-capacity. Specifically, it uses what Mercedes-Benz calls an EQ-Boost starter and generator. The ingenious starter motor is powered by a belt thanks to an electrical system of 48 instead of 12 volts. The result is a car that has some hybrid features. The electrical system supports the M264 bumped combustion engine and temporarily disables it under other conditions.

The result of all these clever ideas is that the E 350 Coupe uses only 6.7 liter per 100 kilometer according to the NEDC cycle. This is more economical than the much less powerful E 200 Coupé, for which 7.0 liters per 100 km is noted. The convertible version of the E 350 is less efficient at 6.8 liters per 100 km. Quick is another trick: from 0 to 100 in 5.9 seconds the top speed is limited to 250 km / h. Pioneering technologies such as the EQ-Boost starter-Generator, 48 volt on-board electrical system and a particulate filter for petrol engines contribute to enhanced environmental compatibility.

In addition to the new engine, which will undoubtedly quickly find its way to other models, Mercedes also makes some minor changes to the range of the still very new E-Class Coupé and Convertible. There are some new colors and options, there is a new option for the interior decorative frames and adds the brand by offering more options and accessories a lot of personalization options.

High performance with the characteristics of a hybrid

The engine’s special features include twin-scroll turbochargers, belt-driven 48 V starter-alternator (EQ Boost) and electric 48 V water pump. In conjunction with the modern on-board 48 V technology, the starter-alternator enables outstanding efficiency by making hybrid functions available. In practical terms these are seen in such features as 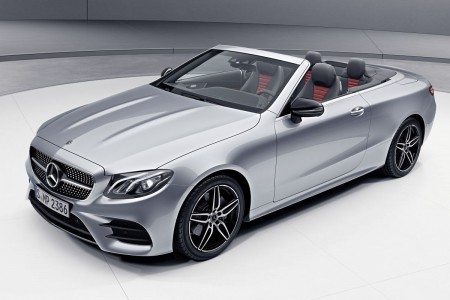