Brabus Mercedes S-Class – As ridiculous as can be

Brabus has always been a benchmark in tuning for the Mercedes-Benz brand, in terms of power as well as looks. But how come they would end up with the most ridiculous and awkward creation that there can be? Meet the Brabus 900. 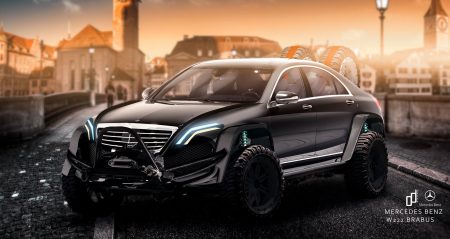 But don’t worry, this is far from being real, as Brabus has a reputation to uphold. It is just a digital render made by Oleg Oscar. He must have also imagined a gigantic garage for the behemoth.

One of the most elegant and exquisite sedans, the Mercedes-Benz S-Class has been converted into frightful off-roader. „A blasphemy!”, the fans of the exclusive model would yell to see the S-Class equipped with massive wheels and chunky rubber, with a lift kit that sets it even further from the ground. 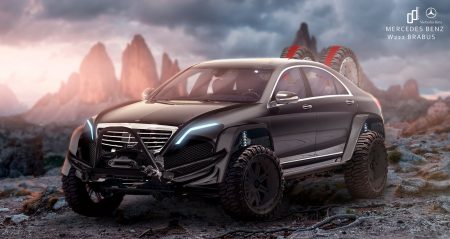 Typical to the absolute off-roader with the three-pointed star in the radiator grille, the G-Class, the S sedan gets the spare wheel at the rear as well. Actually not one, but two of them. We don’t get to see a glimpse of the back of the car though, to check out how they are attached onto it, but from the front, they almost seem to be floating.

As bizzare as it can be, the Brabus wannabe Mercedes-Benz S-Class would surely turn heads out in the street. If it would ever make it there. We pray that it won’t.

Here is a real Brabus creation, a real piece of art – A restored Mercedes-Benz 300 SL Gullwing, presented in Geneva