After the team won the constructors’ world title in Russia last Sunday, Mercedes decided to pay their Formula One staff a consistent bonus of £7 million.

Toto Wolff, the head of Mercedes Motorsport and Paddy Lowe, the technical director, will have the chance to tell the good news to the 700 workforce. Every employee, from the highest paid engineer down to the catering staff will receive a minimum payment of £10.000.

But the members of the team that earn six digit salaries, like Wolff and Lowe, could receive even more than that number, so the £7m can be considered just the starting point.

Lewis Hamilton, the champion, got another kind of bonus, more exactly the confirmation from Wolff that he will sign a new contract, besides the current one which expires at the end of the next year and the same will go for Nico Rosberg. 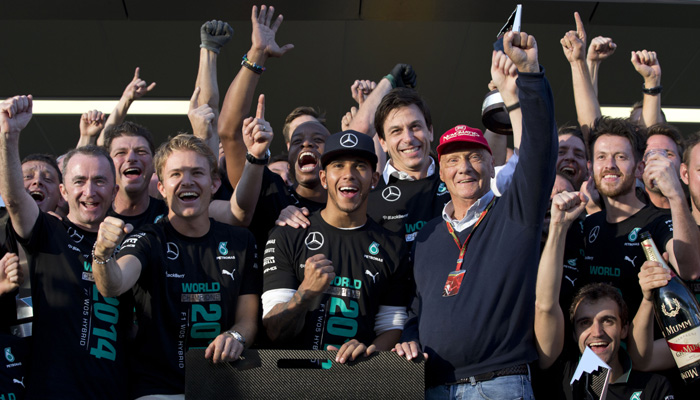 According to Toto Wolff, the racing between Hamilton and Rosberg will become even more competitive, now that the constructors’ championship has been won.

Mercedes has won 13 races out of 16 this season. The German team will receive a small fortune of £40m for their successful season. The drivers will also receive bonuses, even though they hardly need the money, as Hamilton makes an estimated £20m a year and Rosberg earns about £15m.

Wolff also admitted that Mercedes’ triumph has been overshadowed by the concern for Jules Bianchi, the French that was involved in a life-threatening collision with a truck at Japanese Grand Prix, as he remains critical.