The first Mercedes 300 SL Roadster exported to the U.S. changed hands for $1,5m

The first ever Mercedes 300 SL Roadster exported to the U.S. Market was auctioned by Bonhams. Built in 1957, the gun metal grey example changed hands for a whopping $ 1,512,500.

The meticulously restored 300 SL, chassis no. 198.042.7500081, is the fifth Roadster built, and is confirmed by the Mercedes-Benz Classic Center as the first example imported to the United States. Claiming more than 60 unique early production features that distinguish it from later examples, the Roadster also benefits from 50 years of care by a single owner, as well as a recent 100-point restoration by a highly awarded 300 SL specialist.

The Mercedes-Benz 300 SL Roadster (W 198) premiered at the Geneva Motor Show from 14 to 24 March 1957. The open-top sports car superseded the successful “gull-wing” 300 SL Coupé, which was built from 1954. The North American market in particular provided considerable impetus for an open-top version of the 300 SL. In technical terms the roadster differed from the coupé in numerous details, the latter being derived from the successful 300 SL racing car. Today the 300 SL Roadster is one of the most coveted and valuable classics the Mercedes-Benz brand has. 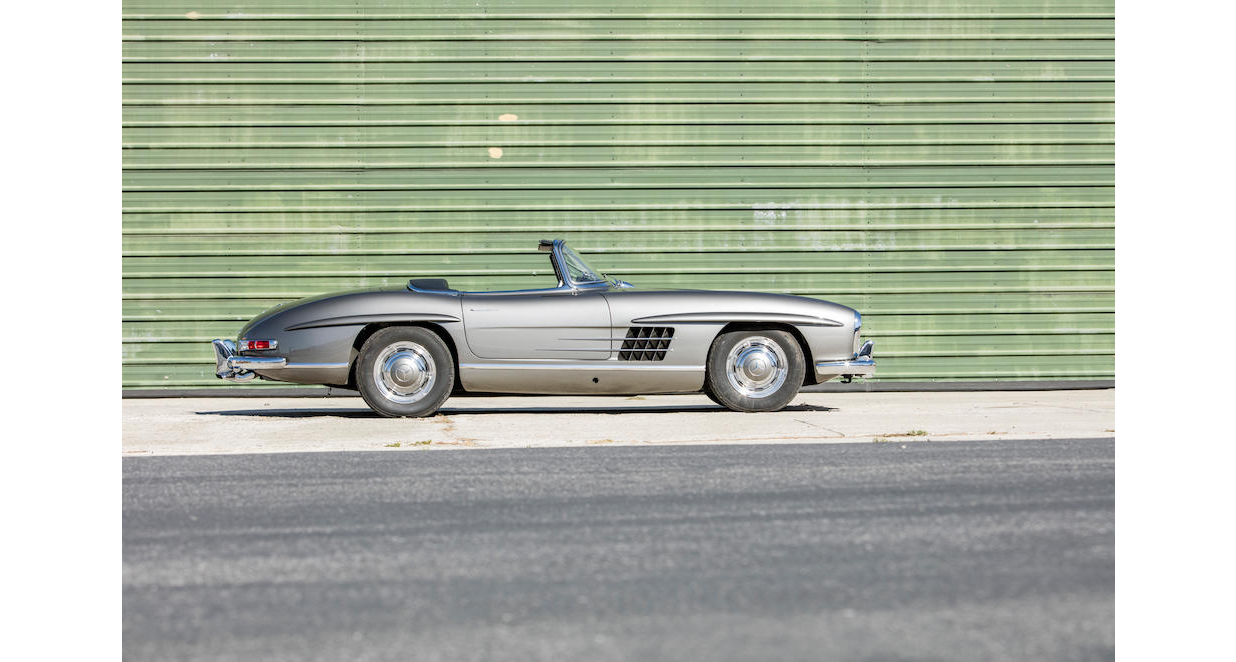 Initially the engineers adopted the engine from the coupé without changing it. The three-litre six-cylinder M 198 in-line engine featuring petrol injection and an output of 158 kW (215 hp) had a grey-cast-iron block. It was replaced in spring 1962 by a 44 kilogram lighter aluminium cylinder block.

Apart from the omitted roof, various details of the roadster’s design also differed from that of the coupé: the open-top sports car has vertical lamp units at the front. These contain the headlamps, fog lamps and indicators under the same lens. In the years that followed, this element would shape the appearance of Mercedes-Benz passenger cars. A soft top, developed by Friedrich Geiger, was necessary due to the construction. It was easy to operate and at the time was the fastest soft top to open and close by hand. After opening it was concealed beneath a sheet metal cover. Eighteen months after the market launch of the roadster, a hardtop which had been planned from the outset became available. 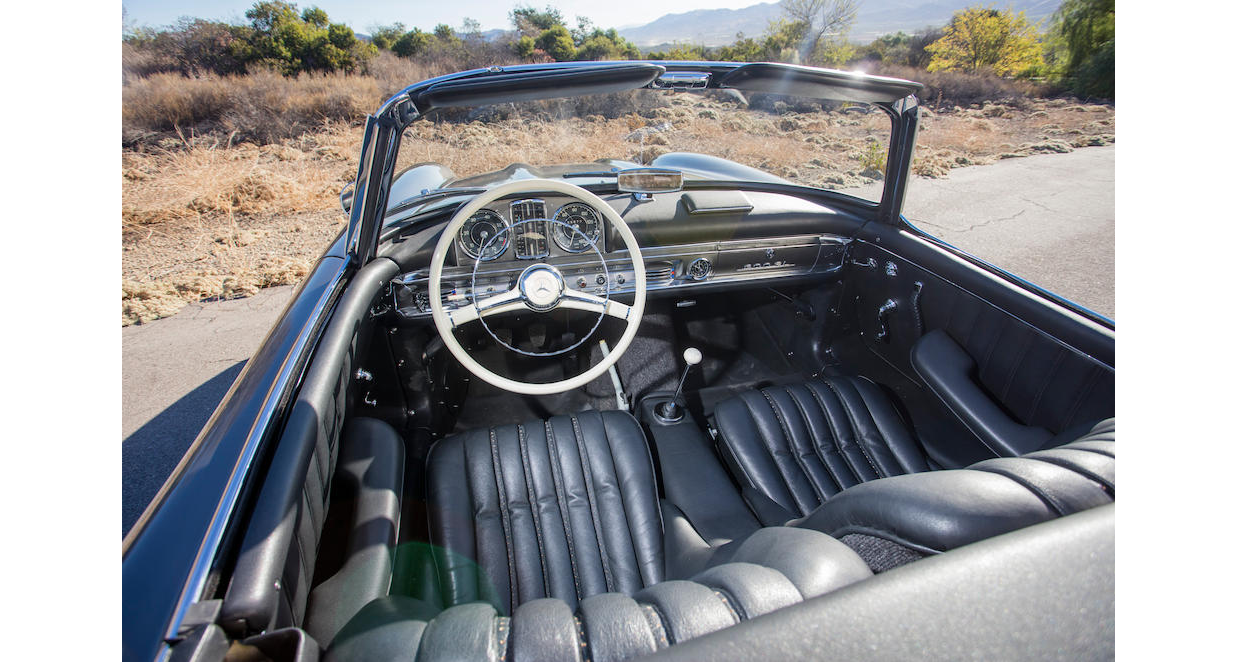 Short history of the Bonhams car

Accompanied by many original receipts and documents, a copy of the factory built sheet and an original owner’s manual and toolkit in the proper roll, this sensational 300 SL currently displays 55,889 miles on the odometer (believed to reflect actual mileage).

As listed by a handwritten note in the car’s file by a former owner, the 300 SL was titled in Virginia in 1961 to Howard Hurley Wills and his wife, Katherine. An original sales contract indisputably reveals that the car was sold in July 1962 by the Chesapeake Cadillac Company of Baltimore, Maryland, to local resident Dr. James Mozley. Mozley was a professor of nuclear medicine at Johns Hopkins who pioneered computer control of x-ray technology in medical imaging, obtaining several patents that remain in use today. He remarkably retained possession of the early Roadster for 50 years, moving to Camillus, New York, by the late 1960s, and steadily servicing the car as needed (as demonstrated by a substantive file of invoices). In 2006 the engine was rebuilt by Jacobs Automotive of East Syracuse, and Dr. Mozley continued to enjoy the Roadster, accruing some 35,000 miles in total during his ownership, which sadly ended upon his passing in 2012. 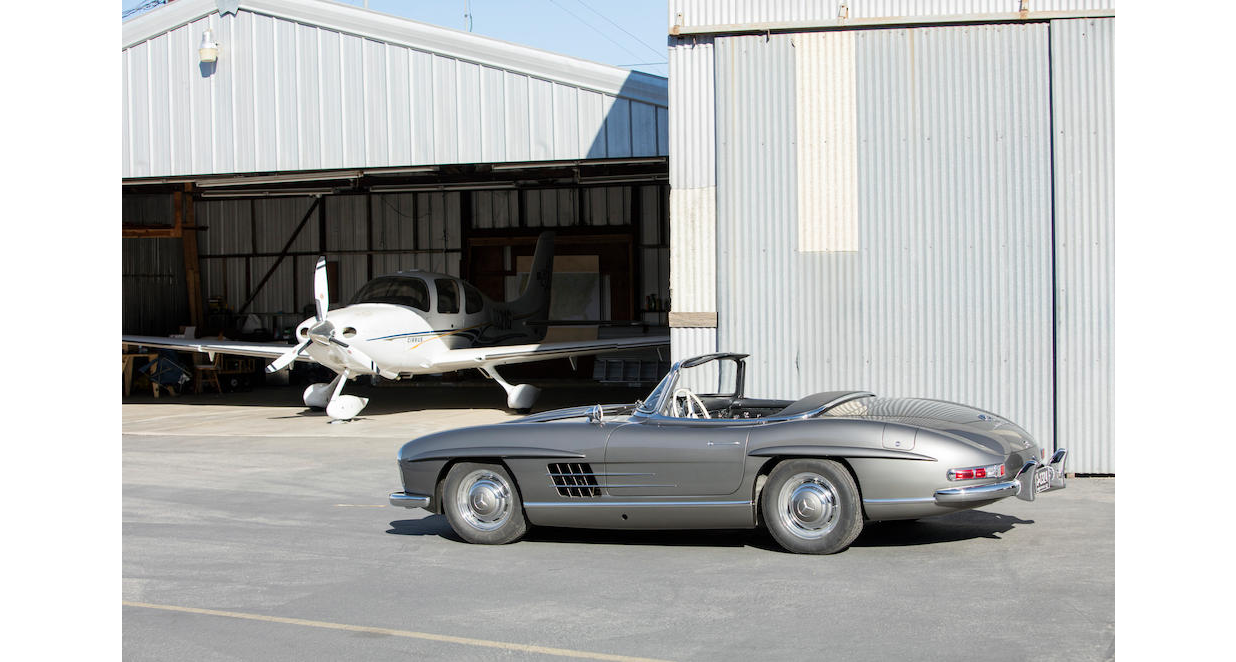 Offered for sale at Amelia Island in March 2013, the rare early Roadster was acquired by the consignor, a respected collector of exceptional European sportscars based in New Jersey. He soon retained Mark Allin’s highly regarded Rare Drive, of East Kingston, New Hampshire, to perform a comprehensive restoration to factory standards.

Rare Drive comprehensively restored the Roadster, rebuilding all of the mechanical and cosmetic elements, and completely restoring the chassis and engine bay to original condition as assembled by the factory. The interior was correctly re-trimmed in proper black leather, while the exterior received a bare-metal finish in the period correct 300 SL anthracite Glasurit paint, and the original softtop was rebuilt. Almost certain to garner recognition for sheer quality and correctness, the restoration also provided the research necessary to understand all of the intricate aforementioned details that are uniquely offered by this early example. Several hundred photos and receipts of this 100-point restoration are available in the substantial history file, the latter adding up to $460,000. 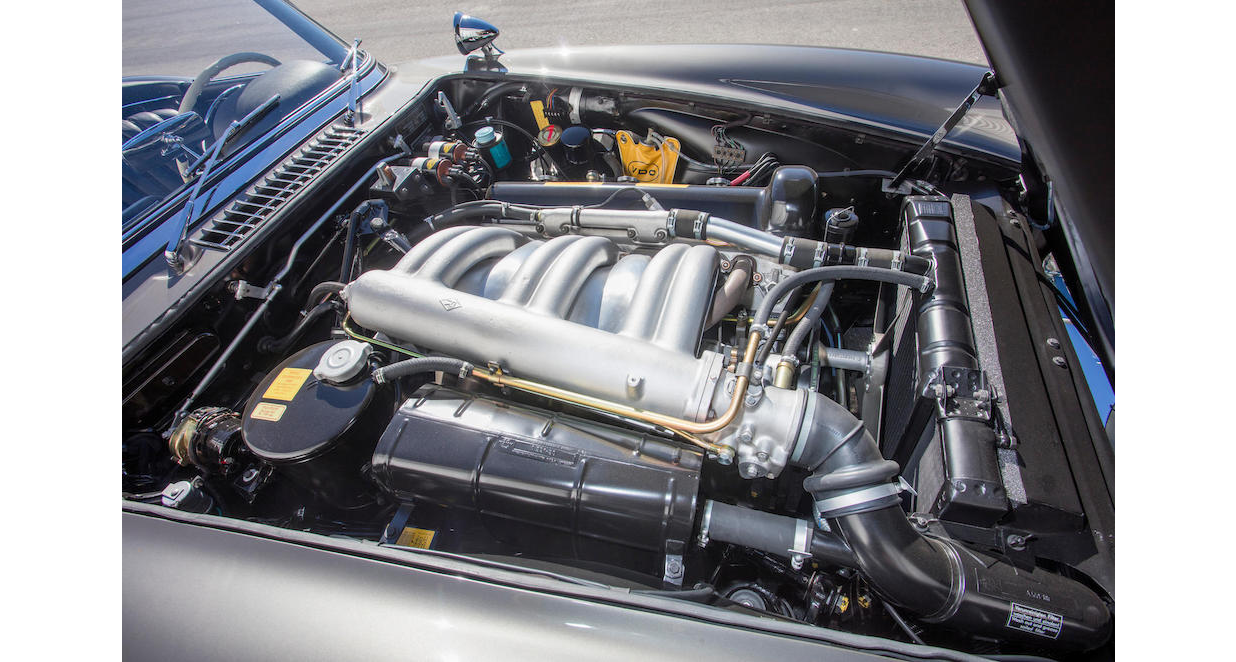 According to the factory production record, chassis no. 198.042.7500081 was equipped with sealed-beam headlamps with separate marker lights, a rear-axle ratio of 3.89, and instruments in English. Finished in Fire Engine red paint with an interior upholstered in black leather, the 300 SL was dispatched for the United States on June 4, 1957, exported through the port of Bremen to Miami, Florida. Rare early-production details include a body-colored instrument panel, plastic heater bezels, longer anodized trim pieces on the rear bumper valance, unique front marker-light lenses, unique windshield wipers and wiper linkages, and unique door panels with chromed brass trim (rather than anodized aluminum). The soft top possesses structural bows made of 100% aluminum rather than the chromed steel and alloy units used on most subsequent cars, and the trunk displays unusual elements such as exposed tonneau hinge springs, matching carpets, and the lack of a factory tar-mat.

Mechanically, the Roadster possesses a unique oil tank in the engine bay, and an unusual washer hose routing. There are also a number of “missing” components that would appear on later cars but were not yet implemented as of this chassis’ build, like door sill moldings, a reclining function on the passenger seat, and a passenger-door lock. 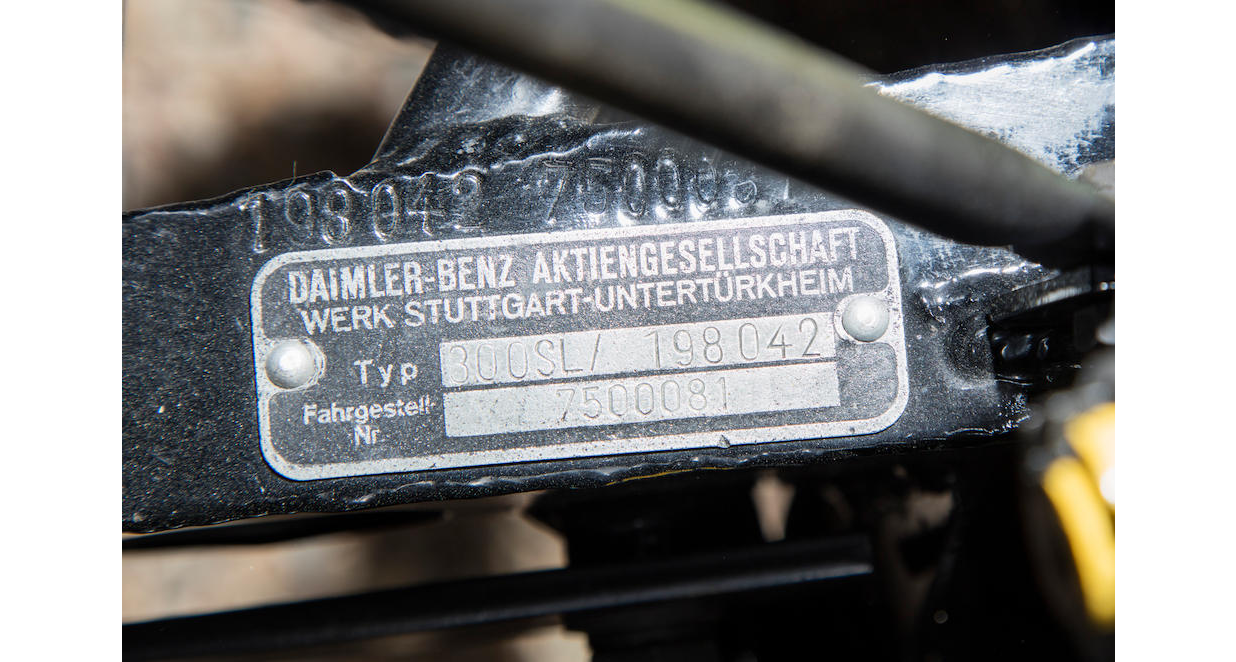