A billion drag races that have put the Mercedes-AMG GT S to the test would still not compare to this. Not in a million years. So now the latest sporty from Mercedes is racing the Euro Train in a race from London to Cannes, on the sunny Mediterranean Coast.

We should have seen this coming. The Euro bullet train was the only one left to challenge the Mercedes-AMG GT S.

The Euro Train operates at 300 km/h, but can reach a stunning top speed of 334 km/h. Well, they don’t call it “bullet” for nothing. 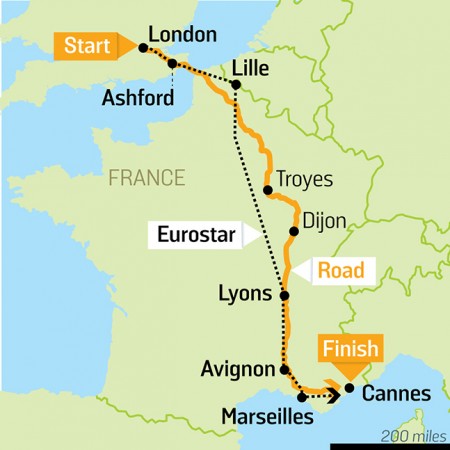 There are roughly 1030 km (641 miles) between the UK capital to the city of Cannes on the French Riviera.

The Sunday Times editor Dominic Tobin got behind the wheel of the GT S, while his colleague, Joe Dunn, rode on the train. Considering that there was a possibility of the Mercedes to encounter traffic jams, traffic restrictions, stops of refilling, the car left an hour earlier, at 3:10 a.m. The channel crossing from the UK to the Northern France will take about 35 minutes. The passenger of the Eurostar transcontinental service must catch his connection in Marseille. Meanwhile, he will just be sitting back and enjoying the ride.

So how will the Mercedes bombardier do against the Euro bullet train?

The Mercedes AMG GT S, with Dominic Tobin behind the wheel, hammering it down along the French autoroute for no less than 10 hours, reached the city of destination on the Southern France, 20 minutes before the train. But why was Joe Dunn late? According to his calculation, the GT S was supposed to be an easy target. You must have found out from the video, right?