BMW is working on a mild facelift for the 3 Series

After a much-awaited facelift applied to the current generation BMW 1 Series, BMW will also refresh the most important model in its line-up: the 3 Series.

From what we can tell by looking at the pictures, BMW will only apply a mild facelift to the 3 Series. In this respect, Munich designers have redesigned the front bumper which now offers modified air intakes but the sedan will also receive full-LED headlights instead of xenon lamps and new rear lamps.

That’s about it regarding the exterior, but the majority of improvements will be under the hood, according to BMW. When introducing the updated 3 Series, BMW will offer the all-new range of three-cylinder 1.5-litre petrol and diesel engines. 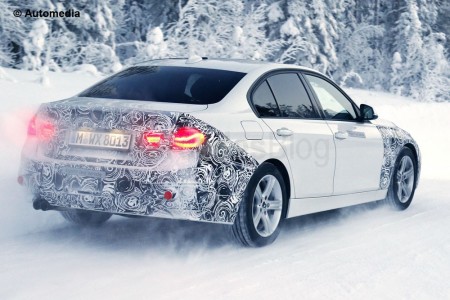 As we already know, this units will also equip a wide range of models in the future, starting with the new MINI and finishing with the 1 Series, 2 Series, 3 Series plus the 5 Series and even the BMW i8.

In addition to the new engine line-up, the 2015 BMW 3 Series will also receive new (or updated) driver assistance systems plus a series of comfort features such as the traffic jam assistant already offered by the 5 Series and the X5.