Those looking for a sporty German compact car have now got more choices than ever, which obviously is a good thing. It does tend to make a decision more difficult, though, so that’s why equally German magazine Auto Motor und Sport decided to split the hairs on these three cars: the BMW M235i, the Audi S3 Sedan and the Mercedes-Benz A 45 AMG 4MATIC.

Just by reading these names there’s one aspect that should strike you: while the Mercedes-Benz has the full blown AMG badge stuck on it, the other two cars are not really top of the line: the BMW 2-Series will get a proper M version soon (the M235i is an M Performance car) while the Audi S3 is the less potent sibling of the RS3 – which, indeed, does not have a sedan version (yet, hopefully).

On the other hand, these three cars also have slightly different body styles: the A 45 AMG is as hatchback as hatchbacks get, the S3 Sedan, as the name so subtly suggests, is a sedan while the BWM M235i is what most people would call a coupe. But the body shape does not affect the driving dynamics in any way – it’s what lies underneath.

All three cars have the advantage of four wheel drive, something the BMW performance cars still refuse to fully embrace offering the xDrive system as an option. The AMG and S3 use a Haldex system to drive the rear wheels and they both have two liter four cylinder engines, but with the AMG 60 hp more powerful than the S3 Sedan (and 70 Nm). The BMW on the other hand brought the biggest toys to the playground with a six cylinder in line six dishing out 326 hp and 450 Nm – that’s 44 hp less than the A 45 AMG and exactly the same torque figure. 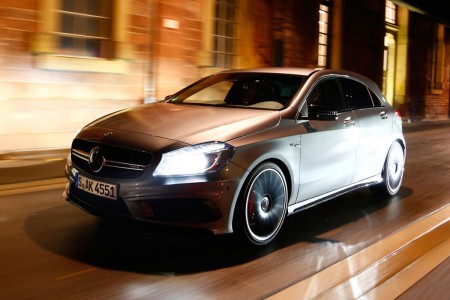 But all differences aside, it’s how these three cars drive that’s more important and the first test sees them negotiate a wet track with the occasional water build-ups. The four wheel drive systems certainly help the three here, but they seem to help the Audi and the BMW the most, with the A 45 AMG 4MATIC struggling to maintain traction under these conditions.

In the dry, though, the story’s entirely different. The monstrous power of the A 45 AMG 4MATIC gets to shine while the other two cars can only sit back and admire. Strangely, the BMW M235i xDrive is the only one here without a double-clutch gearbox and yet, it’s the best performer transmission-wise. It manages to shift gears both faster and smoother than the other two, making its transmission more preferable both on and off the track. 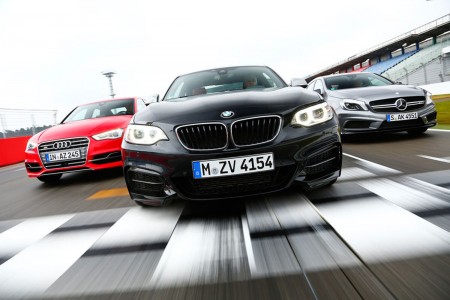 Just as surprising is the fact that the BMW wins the slalom challenge as well, despite being the heaviest of the bunch. On the track, though, it’s the Mercedes-Benz A 45 AMG 4MATIC who gets all the credit fizzing through corners like it was born to do it – which… he partly was.

In the end, the BMW M235i xDrive is only one tenth slower than the Mercedes-Benz A 45 AMG 4MATIC on the Hockenheim track, but they say it feels a lot slower. The BMW has softer suspensions than the A 45 AMG and it sways a lot more on the track, the fluffier steering feedback not helping at all. The fact it gets so close to the AMG car can only be put down to excellent chassis design, since the heavy front (where the big engine is) should have made the BMW prone to understeer. 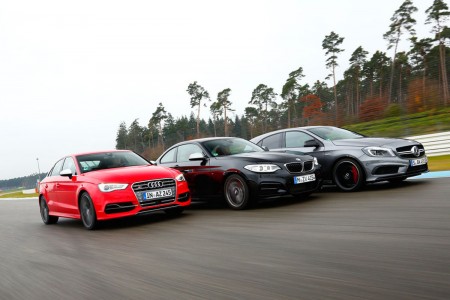 The Audi S3 is a good overall car, but it doesn’t particularly shine in anyway. The victory goes to the other two, so it’s a tie. It’s difficult to choose between them as they are fundamentally different, but even so their performance is so similar. The A 45 AMG is clearly the sportier choice, with a flashier exterior and a powerful sound. The BMW M235i is more discreet in appearance and overall presence, but it’s almost just as fast around a track. There you have it: two separate recipes for pretty much the same outcome.