BMW M2 is old school fun. Mercedes should watch its back

Following the early leaks, BMW M2 is finally here in all its glory. The Bavarian power house goes back to its roots with a light, powerful uber-coupe, something Mercedes doesn’t yet have in its line-up.

Embargoes exist just to be broken, apparently. Yesterday afternoon all the official information regarding the mighty new BMW M2 was already floating on the internet, thanks to a leaked spread from the British magazine Auto Express.

Most details are already known, but for the sake of conversation we will make a quick recap. Power is provided by a three-liter six-cylinder twin-turbo engine, good for 370 hp and 465 (500 in overboost) Nm. All this to propel you via the DCT automatic transmission in 4.3 seconds to 100 km/h. Top speed is 250 km / h. Without the limiter, courtesy of the M Drivers Package, it can go all the way up to 270 km / h. 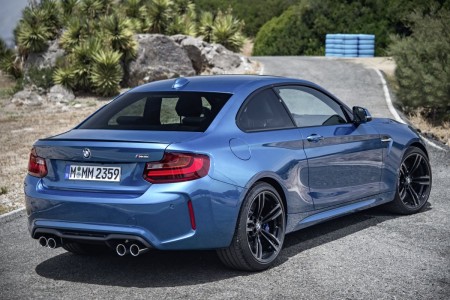 The suspension is made up of components that are also used for the M3 / M4. Optimum traction is guaranteed by the electronic M differential. Drivers who like to visit the limits may activate the M Dynamic Mode stability of the system, which allows the electronics (to some extent) to react just a little bit latter – for the sake of pure old fun that is.

In addition to the usual M look spoilers you can recognize an M2 thanks to the four exhaust pipes and its 19-inch alloy wheels. Inside, BMW’s sporty arm has thrown in some carbon and M-labels on top of the Alcantara in which the center console and doors are finished. Blue stitching provide the necessary contrast. 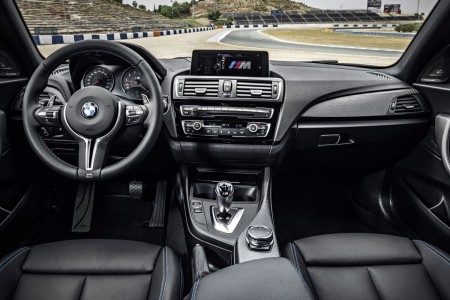 No manual! BMW M2 will come as standard with the DCT automatic transmission. Commercial debut is slated for April 2016.