BMW M2 – the first pictures of the real car

It seems that starting the autumn of 2015, the Mercedes CLA 45 AMG will have a strong competitor in the new BMW M2.

These are the latest spy photos of the real BMW M2. The sportiest version of the BMW 2 Series had been spotted in a winter environment and this time, a lot of details are clearly visible.

Compared with the prototype spotted doing laps at Nurburgring last summer, a lot of things had been changed. The wider fenders that seemed to be bolted on are gone and gone are the improvisations seen the first time. In fact, this is a production model, with wider hips and seriously wide wheels to match. Under those wheels, massive cross-drilled rotors hide, while the boot lid gained a small lip for more downforce on the rear axle.

Up front, the bumper shows that there’s a new design for the side air intakes in the works, while round the back the quad tailpipes hint to an upgraded version of the N55 units used in all cars sold by BMW these days with the ‘35i’ alphanumeric badge on the boot. However, in this application, it will be developing close to 370 hp and around 500 Nm of torque. 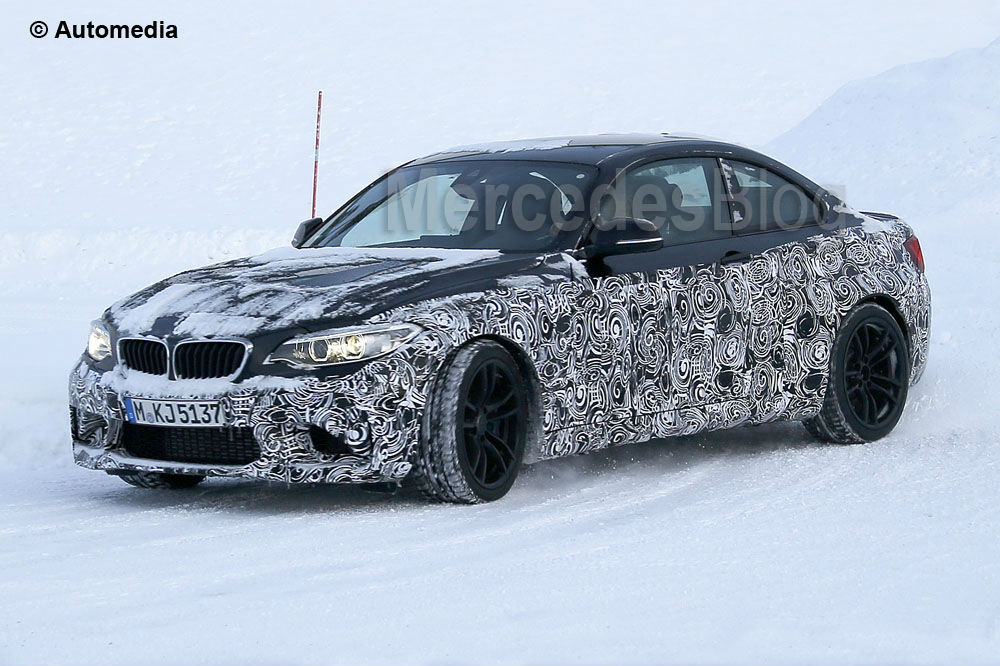 According to our inside source at BMW, the M2 will also be available with both, a manual and an automatic gearbox, most likely a 6-speed and an 8-speed, respectively. For the rear axle, a limited-slip differential is included.

Therefore, the specs should make the M2 a bit faster than the M235i Coupe that is currently on sale. Since that car can do 100 km/h in 4.6 seconds (with xDrive), the M2 should drop under 4.5 seconds, most likely at the 4.4-second benchmark.

Production is slated to begin in November this year, so expect the M2 to make a first appearance in concept guise at Geneva, with the production model to be unveiled in Frankfurt in September.

The BMW M2 will compete against the Audi RS 3 Sportback (367 HP) and the Mercedes CLA 45 AMG (360 HP) in a hot hatch premium compact battle, which has been announced as one of the hottest of the year.