The long-anticipated BMW M2 Coupe has been spotted again, this time while undergoing testing on the German Nurburgring. And yes, it looks really menacing from where we’re standing.

As you might have heard from several online reports, BMW is rumoured to launch the M2 Coupe in 2015. In that respect, BMW is planning to equip its new offspring with a detuned version of the 3.0-liter straight-six powerhouse in the latest BMW M3 and M4, which will develop around 370-390 hp.

However, this is all just unofficial information, but what we know for sure is that BMW M2 has started testing, as this set of spy-photos reveals the performance coupe during snow testing somewhere around Nurburgring. 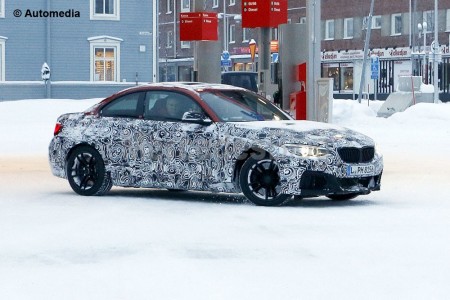 From what we can distinguish based on these spy-shots, the BMW M2 looks very sporty and agressive, thanks to a very wide front axle capable of some fierce air channeling. Nevertheless, the rear track is wider too, and that means more power that on the stock BMW M235i.

Unlike earlier prototypes, this particular test car wears the production bumper at the front with the typical M air intakes plus the real front wheel houses – which were fake on all other previous test mules. 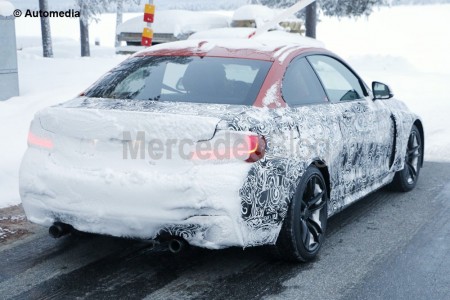 The rotors are cross-drilled and the brake calipers look very much the same as on the new M3 and  M4. Once all testing sesions will be completed, the engine will be codenamed N55B30T0 and bearing in mind the car’s compact dimensions, it should help the BMW M2 perform remarkably on the road.