Bizarre Mercedes-Benz S-Class Spotted, Must Have Gone Through Some Kind of Trauma

Yes, it seems next to impossible that this was once a Mercedes-Benz S-Class. But it was. A YouTuber spotted it in India and posted it online.

It is allegedly a Mercedes-Benz S-Class from the W126 series. Who would’ve thought, right? The mods were probably intended to make it look futuristic and impossible to recognize. But it’s now covered in dust and rust and features a design that makes it look like anything but a Benz. And the only epithet that defines it is “bizarre”. So we’re not going to call it ‘ugly’ or ‘beautiful’. We leave that verdict up to you. But we know exactly what you’re thinking right now. No, we don’t read minds.

The car reportedly paid a visit to the DC Design shop, but there is no indication at the moment of that mistake. “Mistake” sure is an understatement. When it drove off, it bore the name SF1. We wonder if the S and the F stand for science fiction. The former luxury sedan turned into a sci-fi coupe, to put it lightly. 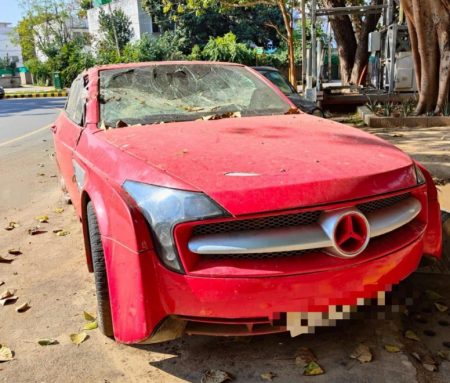 If you look at it from the front and ignore the fact that there is still a three-pointed star logo (in red!), there’s no way in the world you could guess where this contraption came from before it became what it is today. The new hood abruptly bends down towards the radiator grille that the tuners must have carried over from some newer model, together with the vertical slat and the badge.

Two boomerang headlights flank it that strange-looking grille. The front fenders have grown outwards. They are connected to the rear fenders via a descending beltline. There are (probably plastic) air vents on the sides as well, matching the slat in the grille.

The experts must have cut and welded a lot of the body of the former W126 to convert the former four-door into a two-door. There is also a notable mod on the roofline. It looks elongated and slips down towards the boot, extending into a rear decklid. Pretty coupe-ish, isn’t it? The rear bumper integrates some kind of an air diffuser. 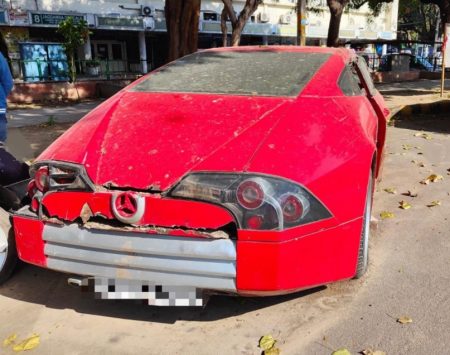 But there are dents, dust and rust all over this red-painted body. It actually looks like wolves must have bitten bits of it everywhere. Holes in the door panels hint towards a possible attempted and failed break-in.

The video has been on YouTube since the end of January. But an Instagram post reminded us all of the poor vehicle that was once a Mercedes-Benz S-Class. Rest in peace, W126.