1976 – That is when the legend began. The Mercedes-Benz 123 model series saw the light of day and turned out to be a major hit. In 10 years from its launch, 2.7 million cars were sold. Called the E-Class starting 1993, the ground-braking model of today continues the story that began like all the others, with “once upon a time…”.

World, meet the new Mercedes-Benz saloon! That was what they Mercedes-Benz enthusiasts heard in January 1976, at the Paul Ricard Circuit in southern France. The 33 test and demo vehicles fleet was transported by an especially chartered train from Deutsche Bundesbahn in Stuttgart to the French Riviera. No less than nine different models, from the 200 D to the 280 E, featuring a wide spectrum of equipment lines, were presented on the day of the premiere. 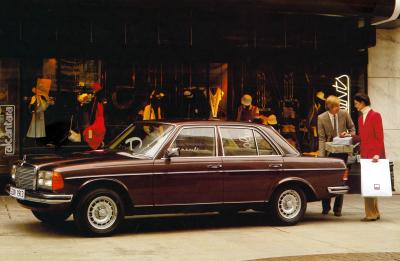 It was introduced as a Saloon, but one year later, Mercedes-Benz completed their mission creating the Coupe (C 123) and the Estate version (S 123), named the “T-model” by the Germans, to show it was derived from terms as “Tourism” and “Transport”.

1977 also saw the birth of a sedan version with a long wheelbase extended by 63 centimeters. 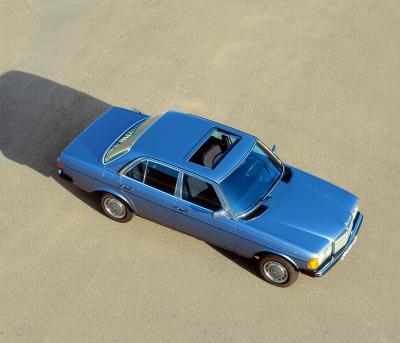 Following its presentation, the car was sold out during its first production year and early second-hand models were often sold for their original price.

With its horizontally positioned headlights instead of the vertically mounted units and with a wide range of engines, the 123 model series was borrowing design and technology cues from the 116-series S-Class.

The new 123 model series was meeting all the requirements of the specification book drawn up back in 1968, when the idea of the vehicle first came to the mind of the Mercedes-Benz engineers. They were to build a safe, comfortable and easy maintainable limousine with futuristic design and technology.

In 1982, the airbags became an optional extra passive feature for the 123 model series. Large crumple zones, a solid passenger cell with stronger struts in the doors reduced the injury risk in case of collision. 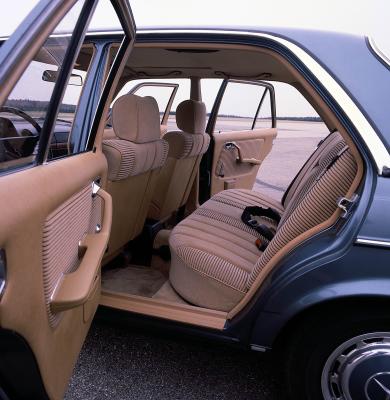 Bela Barenyi’s invention, the safety steering shaft made its debut in the W 123.

The latest E-Class, the car that has a mind of its own, was not the first member of the E family to experiment new technology. In 1981, Mercedes-Benz came up with the idea of equipping a 200 model with a bi-fuel drive system (liquefied petroleum gas and petrol).

The 123-series sedan rolled out of the production line until November 1985, with the Estate version being discontinued in January next year. 2.7 million cars were sold during the decade, with the standard wheelbase sedans being best sellers (2,375,440 cars).