Call your kids in front of the screen. This is for them as much as it is for you. The Mercedes-Benz V-Class shows up in „Snoopy and Charlie Brown – The Peanut Movie”, only in cinemas starting December, 23rd, right in time for Christmas.

The friendship between underdog Charlie Brown and his beloved beagle Snoopy is as big as their car is, the Mercedes-Benz V-Class. The more, the merrier, so Snoopy and his crew, Lucy, Linus and the rest of the beloved „Peanuts” gang are finally making their big-screen debut in a 3D animation in „Snoopy and Charlie Brown – The Peanut Movie”. 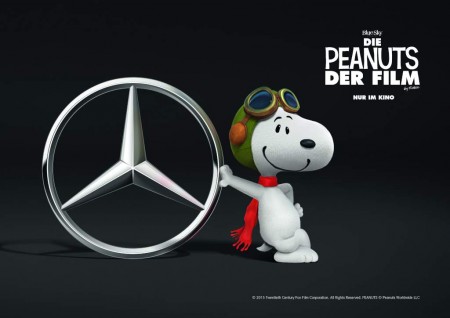 The very lovable beagle Snoopy, aka „Flying Ace” and his pals embarks upon a great mission, as they take to the skies to pursue their arch-nemesis, the Red Baron, and win the heart of the Little Red-Haired Girl, who made Charlie Brown fall head over heels in love from the very moment he first saw her. It was love at first sight, just as it was with the V-Class, a van big enough to accommodate their dreams.

From the creators of the „Ice Age” films, „The Peanuts Movie” is set to prove that every underdog has his day. The video promoting the V-Class together with the 3D movie will be broadcast on German television, starting December, 5th, about two weeks before its movie theatre release.

“We are delighted to accompany the new Peanuts movie with our V-Class. We believe the V-Class perfectly matches this entertaining film for young and old alike. Especially families value the high level of safety as well as the comfortable spaciousness combined with dynamic design”, says Nicolai Berger, Head of Marketing Communication and Product Information Mercedes-Benz Vans, ahead of the 20th Century Fox movie release.