Soccer players are car collectors, that is known worldwide. Not in the classic sense of the idiom though. They collect everything from cabriolets to super sports cars, as long as they are powerful and expensive. And Barcelona’s Gerard Pique is a car collector as much as he is a soccer player, since his garage shelters a few Mercedes-Benz models and other precious motorized jewels.

A player for Barcelona since 2008, Gerard Pique can’t remember himself the brand and model of all cars that he and partner Shakira own. They’ve got Audi-s, Aston Martin-s, Porsche models, but what got our attention are the cars with the stars from his driveway. 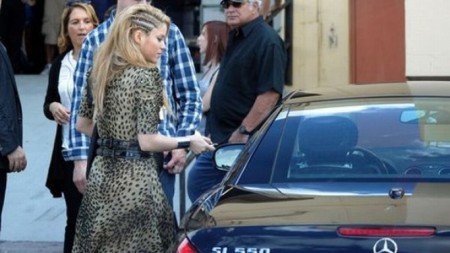 The Barcelona star sand singer Shakira drive a Mercedes-Benz SL 550, powered by a 5.5-liter V8 engine and reaching a top speed of 155 mph (250 km/h). A Mercedes-Benz SLC is also parked somewhere among other extravagant vehicles.

A Mercedes-AMG S63 is also on their list. Shakira also used to drive a 3.5-liter V6 G-Class with 268 horsepower. As much as she loves to drive, she must  really learn how to park. We’ve got the proof that she must have skipped a couple of parking classes at driving school.

With 96 matches played for Spain’s national team and 100 games played at a World Cup, the 31-year old soccer player is the father of two.