Elena Luchian, April 29, 2020
2.14K 0
Home Auto news Back where electromobility started – These are some of the first electric Mercedes-Benz models

One of the first electric Mercedes-Benz models ever built premiered at the Hanover Fair in May 1990. It was a five-seats sedan equipped with all the innovative safety features developed by the company.

It was the beginning of a beautiful friendship built by the company with the electro-mobility. It was an early experiment in the field.

It was May 1990, when Mercedes-Benz exhibited the 190 (W 201) with an electric drive. “In this way, the Mercedes 190, which in terms of length and weight comes closest to the requirements of an electric vehicle, is an ideal battery test vehicle. The main objective is to assess the functional suitability of all the components in realistic situations with all the vibrations, accelerations and temperature fluctuations experienced in everyday operation,” the official brochure explained at that time. 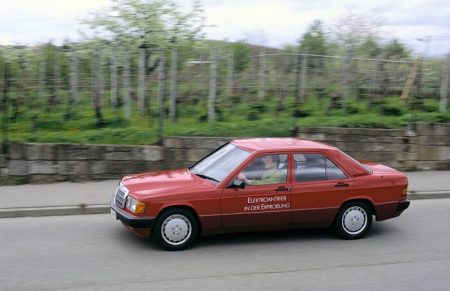 Mercedes used the electric 190s for tests on different drive configurations and battery systems. The high-energy batteries were mostly sodium-nickel chloride or sodium-sulphur, featuring a higher energy density than classic lead batteries. Both systems worked at around 300 degrees Celsius.

One step further along the path of electro-mobility

In March 1991, Mercedes-Benz took its electric models a bit further, displaying a more advanced work at the Geneva Motor Show. “The car is still a fully-fledged five-seater with almost unchanged effective space and with tried-and-tested Mercedes-Benz safety features”, the press kit then explained.

Each rear wheel had its own DC motor with energy supplied by permanent magnets each developing a peak output of 22 horsepower, 44 horsepower in total. Energy was stored in a sodium-nickel chloride battery. The 1991 190 model featured a regenerative braking system and weight 200 kilograms less than the series-production variant. 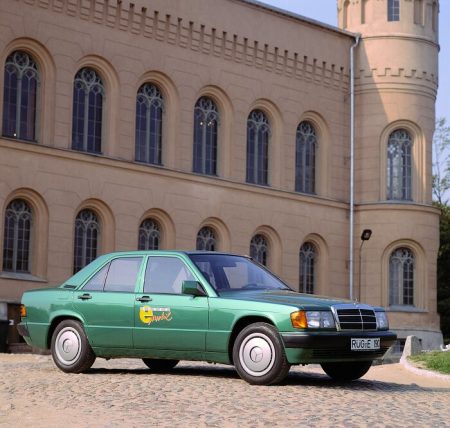 Ten W 201 model series saloons equipped with various electric drive configurations were delivered from Sindelfingen to Rugen. The test participants (such as taxi drivers) used special recharging stations with solar collectors to recharge the car batteries throughout the tests that involved daily driving. There were hardly any problems. One of the vehicles covered 100,000 kilometers in one year. Mercedes-Benz made one more step with implementing similar electric drive systems to other passenger cars.

The ample range of electrified and electric Mercedes-Benz models of today, gathered under the EQ brand, stands as a solid proof of the expertise of all these years.