Three autonomous Mercedes-Benz Actros trucks have left Stuttgart on a mission to reach Rotterdam. The vehicles departed from the Mercedes-Benz Museum and are set to reach the Dutch destination on the 6th of April.

The route is taking the three trucks on the highways A61 and A67 across the federal states Baden-Württemberg, Rheineland-Palatinate and North Rhine-Westphalia towards Venlo for passing the border to the Netherlands. Daimler Trucks is the only manufacturer of autonomous trucks that was officially granted approval to drive on public roads worldwide.

“With our autonomous and connected trucks, we are pleased to participate in the European Truck Platooning Challenge initiated by the Netherlands. I wish our drivers to have a good and successful trip on their way to Rotterdam”, said Dr. Wolfgang Bernhard, responsible for Daimler Trucks & Daimler Buses in Daimler’s Board of Management. 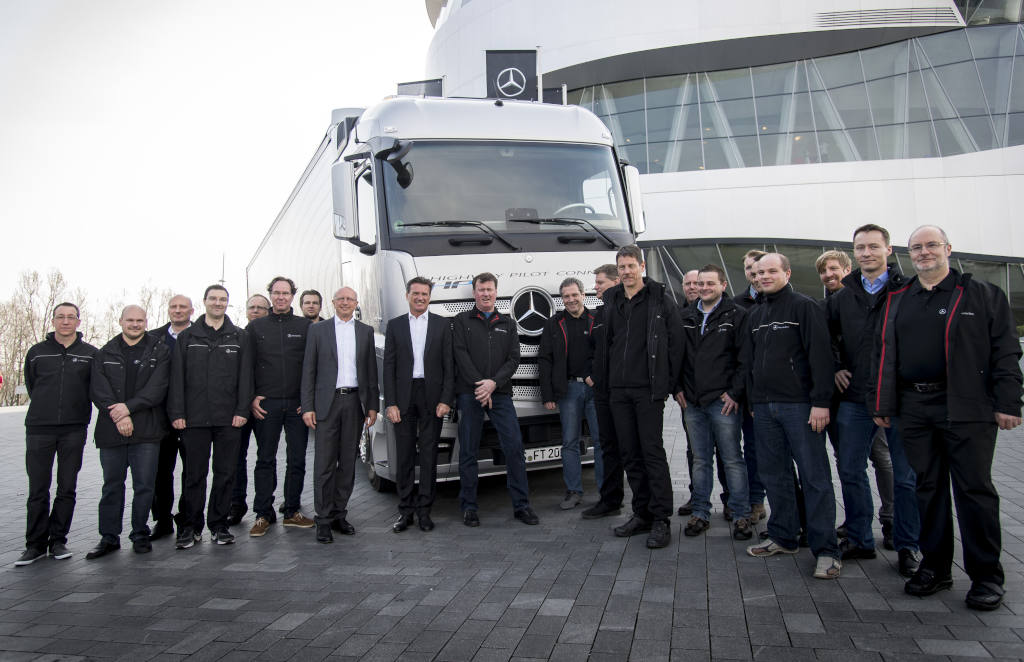 365 000 connected commercial vehicles of Daimler are currently on the road. Daimler Trucks shows support for the initiative European Truck Platooning Challenge 2016 launched by the Netherlands government, promoting the transporting of goods in truck platooning, for a more efficient, more sustainable and safer process. Connectivity seems to be the key to this. The truck convoy travel comes two weeks after the world premiere of the Highway Pilot Connect System on the highway A52. It is the world’s only system for automated driving of the heavy trucks.

The vehicle-to-vehicle (V2V) networking allows electronic docking by vehicles on motorways and long-distance highways, also known as platooning. In a convoy, vehicles must keep a distance of only 15 instead of 50 meters, which significantly reduces the aerodynamic drag, turning it into a slipstream riding produced in the cycling competitions. In this way, the three truck platoon can achieve fuel saving up to 10% and reduce CO2 emissions as well. Also, platooning allows much more efficient use of the road space. The linked vehicles only cover a length of 80 meters. Three trucks which are not electronically docked require a total of 150 meters of road space. The Highway Pilot Connect technology makes transportation much safer, as the technology transmits braking signals to the vehicles behind in less than 0.1 seconds. A human driver’s reaction time is of 1.4 seconds. The driver though always holds responsibility for the control of all assistance systems.