Autoart Nuremberg 2016 report. Autoart has announced a flurry of new Mercedes model cars at this year’s Nuremberg Toy Fair. Among them, the crazy Mercedes-Benz G 63 AMG 6×6 and we have the pictures to prove it.

Allegedly sold out after a production run of little over 100 units, the Mercedes-Benz AMG G 63 6×6 was one exclusive ride. But shah-s, sheikh-s and sultans of the world will soon get the disappointment of their life. Anyone can now live the dream of owning the mad pick-up for a fraction of the $500.000 list price. The bad news is that the scale of the car is also significantly smaller. As in 1:18 small.

The model comes with fully opening parts, including the doors and engine bonnet. Made from ABS (a newly developed injection Acrylonitrile butadiene styrene (ABS) or thermoplastic polymer) and not die-cast, the G 63 6×6 by Autoart hides a little ace up its sleeve and that is a fully working suspension with real springs and separate arms.

The monster pick-up truck (the real 1:1 one, we mean) took its inspiration from the similar, but infinitely more austere model developed specifically for the Australian army. It is 5867 mm long, 2111 mm wide and 2209 mm tall and features two extra wheels and an additional axle. Power comes from the same 536 HP 5.5-litre twin-turbocharged V8 engine used by its humbler and smaller G63 AMG 5-door sibling. Drive is sent to all six wheels via a 7-speed automatic gearbox. 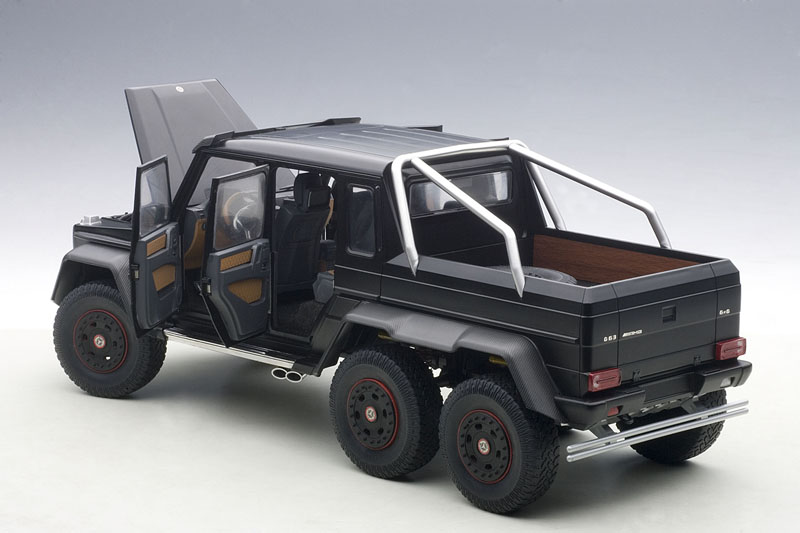 But the G 63 6×6 is not the only hot Mercedes Autoart has in store for us in 2016. Also expected to reach modelcar dealers all over the world sometimes this year are the Mercedes-Maybach S 600 limo in shades of white, black and gold plus the Mercedes-AMG GT S supercar – offered in four body colors, including the popular Solar Beam Yellow launch paint.

Hat tip to our friends from www.colognemodelcars.eu for sharing the news.