At the Auto Shanghai 2019 Motor Show (April 18-25), Mercedes-Benz presents its new Concept GLB, a precursor to a new compact SUV with 7 seats.

After several teasers, Mercedes officially reveals its new concept car GLB, a compact SUV from Mercedes-Benz that stands between the yet to be presented new GLA and the GLC. Unlike the GLA, which the Germans present as an SUV “coupe for a dynamic driving pleasure”, the GLB focuses on livability and robustness.

The GLB is based on Mercedes’s modular platform for compact models, so under the skin of the Auto Shanghai 2019 concept we find the known technology of the A-Class (Hatchback, Sedan), B-Class and CLA. That means that the GLB in the base version will basically be a front-wheel driven SUV. 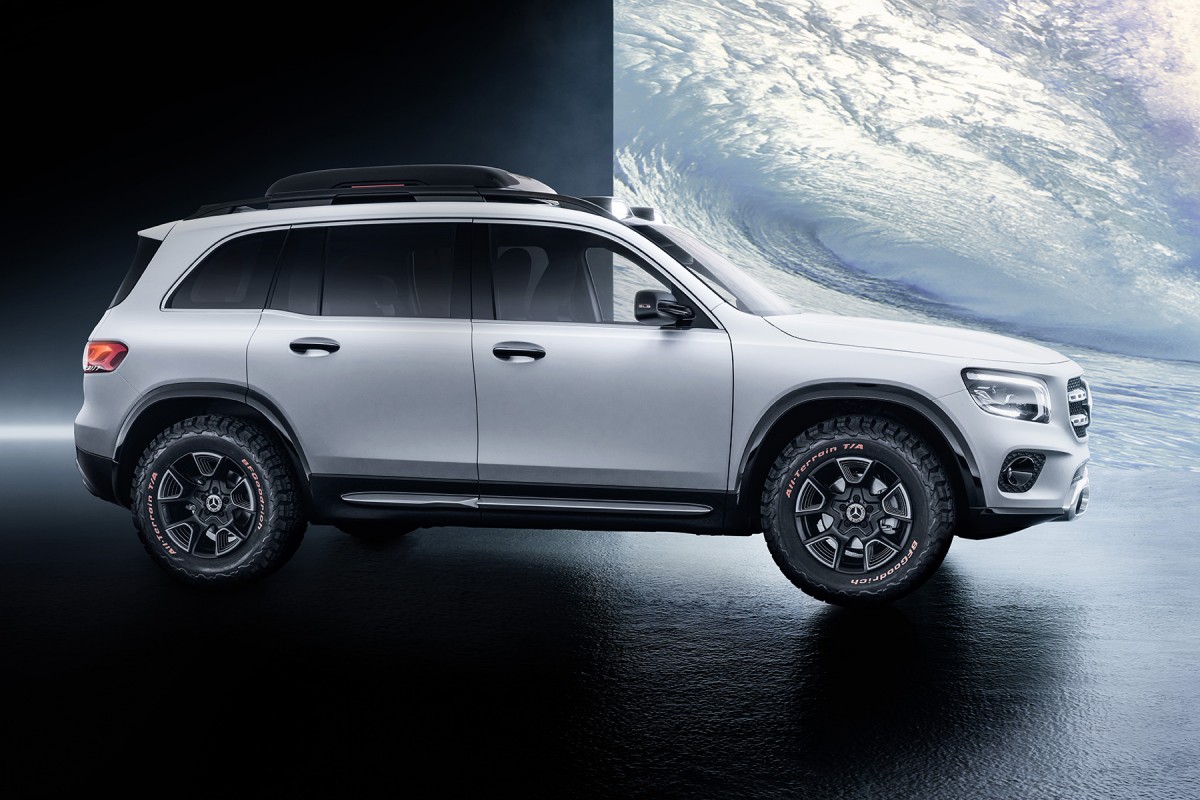 The GLB concept is fairly rugged. Fans of the old GLK will appreciate the square look and the short overhangs. With additional headlamps, suitcases on the roof and 17-inch all-terrain tires from BF Goodrich, the study model plays the adventurer role. We can already imagine it in the next Jurassic Park… but, details like these are the first that will disappear on the production-ready car. Of course, the GLB Concept shows strong similarities in design with larger SUVs such as the GLC and the new GLS, which will make its public debut also this week in New York.

The brand new study model is 4.63 meters long, 1.89 meters wide and 1.9 meters high. Striking: the SUV has a substantial wheelbase of 2.82 meters (2.70 meters for the GLA) and offers space for seven passengers. The prototype can accommodate three rows of seats and up to 7 people. At the rear, the two additional seats can retract into the floor to form a flat surface. The second row, which slides 14 cm, has a backrest which can recline in eight levels. In the cabin, the atmosphere is upscale with leather upholstery or nubuck, in a dominant chestnut color, decorative inserts, orange stitching and, of course, the familiar dual 10.25-inch TFT screens and “turbine aerators”. What is striking is that the center console is not directly connected to the rest of the dashboard. 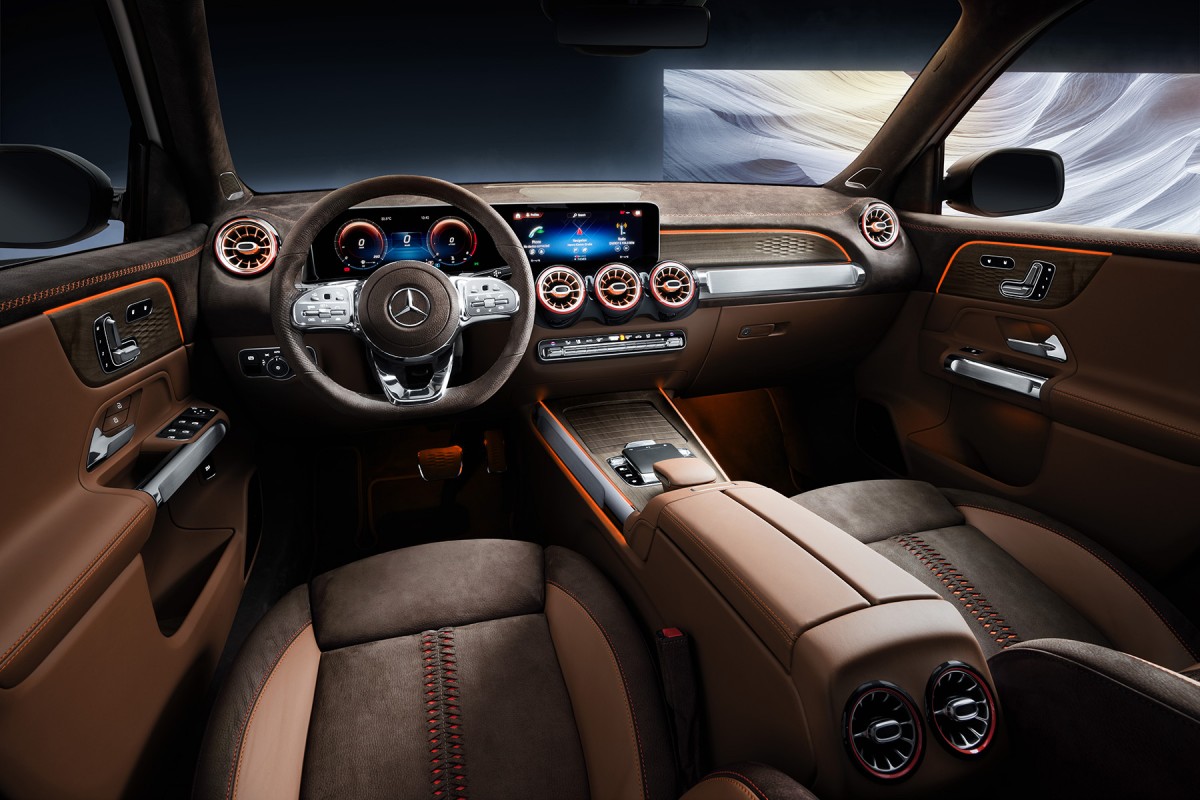 Under the hood, Mercedes has grafted a 4-cylinder gasoline turbo engine developing 224 horsepower and 350 Nm – a unit that we know from the A 250. This is linked to an 8G-DCT transmission, an automatic gearbox with eight speeds and a double clutch. 4Matic is standard and with Dynamic Select the character of the car can be adjusted in three driving modes: “Eco / Comfort”, “Sport” and “Off-road”.  In Offroad mode, torque is distributed over the front and rear axles in a ratio of 50:50. In Sport mode, 30 percent goes to the rear axle and 70 percent goes to the front axle. In Comfort ‘only’ 20 percent of the power finds its way to the rear differential.

The introduction of the production version derived from the Mercedes-Benz GLB Concept presented at Auto Shanghai 2019 is expected before the end of 2019. 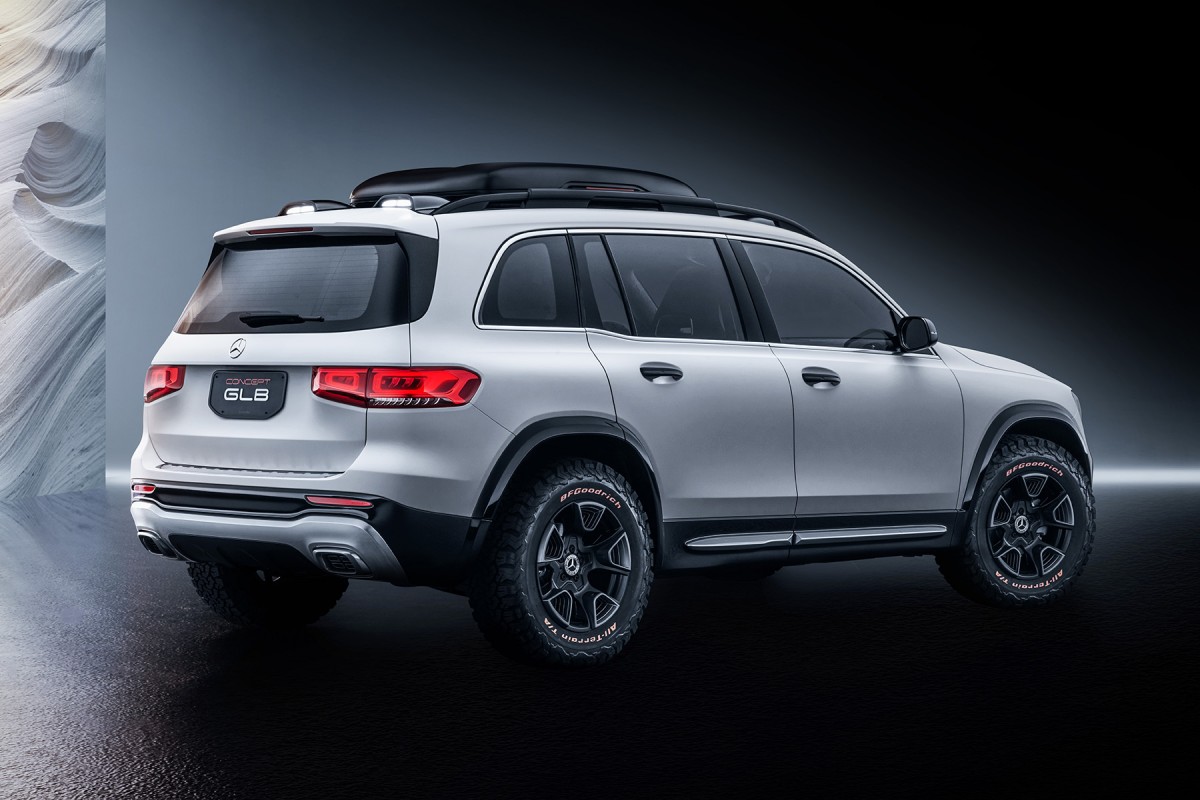