The current Audi Q5 is rather old and so is the other german premium medium-sized SUV, the BMW X3, so the recently launched Mercedes-Benz GLC is not only metaphorically a few years ahead.

Well, these new spy shots as well as reports from the automotive industry show that the GLC will not be enjoying this situation for much longer with Audi nearing the final stages of their new Q5 preparation. Photos of the future BMW X3 are also expected to start showing up sometime during the following year, but for now let’s just concentrate on what’s at hand.

If the new Q7 is anything to go by, the next Audi Q5 has all the reasons to become a great little (well, medium) SUV, if not the best looking among them. Indeed, the design of the Q7 will have people’s reactions  split given how the rounded shapes have now turned angular, but in a rather non-aggressive way.

The new Audi Q5 will definitely have the same major design features of its bigger brother, but it remains to be seen how well it will manage to accommodate them. The looks won’t be the only new thing, though, new engines and a new chassis also being on the table. 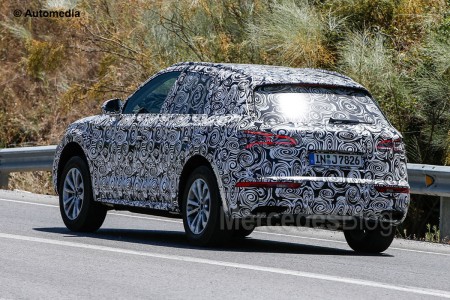 Underpinning the new Audi Q5 will be the MLB architecture, also used for the recently unveiled Audi A4, a fact which should bring the overall weight of the car down by as much as 100 kilograms. Engine-wise, the new Audi Q5 will not mimic Volvo XC90’s example and will continue to use six-cylinder engines as well as four-cylinder ones. Still, all engine units will be either new or thoroughly revised.

There are also rumors of a hybrid version even from the launch which should be named e-quattro and have an all-electric autonomy of approximately 50 kilometers.

After the new Audi Q5, there are plans for expanding the Q family with a few other models, beginning with the Q6 which is said to depart from BMW’s approach and be a more practical version of the Q5, closer to a 7 seat MPV than an SUV Coupe like the X4. After that, Audi will be expanding into new territories for the premium automakers with the Q1, a crossover smaller than the Q3 based on the Audi A1 platform.